What anime do you watch? 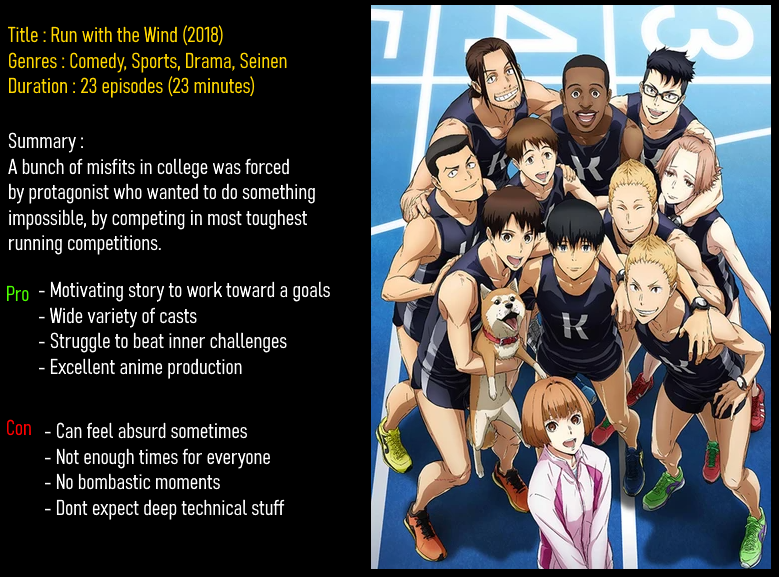 This time around, im on purpose picking up a strong / good score anime. I heard abit about the anime since the writer of the novel also write a novel about another anime that i watched recently.

This anime is a sports anime, but not the traditional shounen type who focused on intense competition or using some quirky ability to beat their opponents. Since the setting is around college / university, definitely this anime will be more mature in the general. It all started from a simple goal of our protagonist to be the best runner. However, he was greeted by weird senpai who wanted to create a team of runner from all of the dorm tenants. It is seem in the beginning as everyone isnt fit and lack of motivation.

As we go every episodes, the wacky / weird setup will be toned down and the story focused more on character driven. We will learn why everyone is who they are and it is their goals to be bonding to eachother to become the best team and beat the competition. Studio that made this anime (production I.G) is already well known in deliver quality anime, while i think perfect for this series as it is more toward realistic story & artstyle. While the story might be slow, this fit nicely as it dive into the struggle of each main casts.

If you like character driven seinen tags, this is probably of rare sports anime you can get. I personally felt hyped while watching it that me wanted to be better and reach my goals.

*Sorry for poor formatting atm, im rushing for some stuffs atm and writing as fast as possible.
#991
4 weeks

Old series, kinda heard about it, but I thought it was a another series that might not interested me.

The story is long drawn revenge story. As our protagonist family got murdered by mafia group, he safely run to the forest. Feeling lost of everything and wanted to seek revenge, he went to join mafia group that he seek to destroyed. Thus, the beginning of tale between gaining trust, doing dirty work, laying a long plan and finally execute it. Along he will meet up with various characters that while can be interesting, but mostly doesnt have time to develop. The story focus on 2 main characters, where we can see from each perspective.

The series is kinda tricky. The reason is because Im was not a fan of the studio who made it. At least the previous entry format (Baccano & Durarara) where it tried to deliver complex story from different characters perspective. While I think the story & direction is beautiful, there are simply too many time it felt too slow & boring. While the plot twist & action scene interesting, it always cut too short and mostly are toward the end of the series.

Again, my suggestion is too give the series few episodes a try first (it slow start afterall). Because mature / gritty story, just take precautious if you are not fan of those.

Simplify my post now as putting link for alternative & colour coding take too much time.
I also watched Battle Blood Blockade last time, but didnt bother doing review that it was meh as I was watching it while grinding. Didnt hook me at all.
#992
6 days