Anonymous: wrote:Black desert is free in steam - downloading to check it out.

You've probably noticed by now, but Black Desert Online is heavily focused around the cash shop. All the cool outfits are locked behind a cash gate, as are cool mounts. If you're feeling underpowered, you can shell out for temporary buffs - for PVP no less. Speaking of which, once you hit level 50 you are automatically added to the PVP environment, and there is no way to decline or turn this off.

If you want to carry a store with you, there's a cash shop item that does that. Want more inventory space? Cash shop. Want to level up faster? Cash shop. You get the idea. And none of these are permanent; you're renting them for one month. If you want to keep using them, you have to keep paying. Calling it "free" is really a misnomer.


Anyway, I've been playing Crosscode. It's a surprisingly well done indie JRPG set inside a VR-MMORPG on a distant planet in the far future. The combat flows well, the platforming is solid, the puzzles do get quite complex but that also makes them satisfying to complete. The environments are pretty varied, there is a wide variety of secrets to find, the art is good and compliments the graphics well, and the plot is interesting. There is also a wide variety of enemies to face, with their own attack patterns, idiosyncrasies, and weaknesses. You can customize your build in a lot of ways, with special attacks, equipment pieces, and occasionally cosmetics. And there is a free demo on both Steam and Gog, so you don't have to pay money to try it! Really, check it out, it's really cool.


I've also played Brigador. It's an isometric mech/tank/hovercraft shooter set in a dystopian future, in the metropolis of Solo Nobre. Great Leader, who used to run the place, is dead, and your employers, the Solo Nobre Concern, want to take the city for themselves. To do this, they're employing Brigadors like yourself with orders to strike at strategic targets to weaken the city's defenders. You have the edge of superior technology, represented as superior armour and shields, but you are badly outnumbered, forcing you to fight smart.

Against you are the city's defenders: the New People's Army with their mechanized divisions. The Corvid rebellion, built on disaffected youths and deserters from the NPA, which fields their own tank companies and mecha platoons. And the Spacers, a vicious band of pirates bent on burning and pillaging their way across the city in the confusion. There is a wide variety of weapons and vehicles to choose from, an even larger collection of pilots and maps to fight over, the graphics can occasionally get a bit murky but it's not so bad that you can't tell what's going on. Quite fun, as long as you don't mind being the bad guy - some of the weapons available are kind of horrifying in their effects, and your superiors will explicitly pay you good money for burning down apartment blocks and trampling civilians waving white flags under the feet of your mech.
#901
1 month

Donated 1 time
Apparently i forgot to give small update last week, so this will be BIG UPDATE.

Genshin Impact
Patch 1.4 is finally here, came with bloody boring hangout dating sim story. I know it already coming from the leak, but to see how it been implemented is such a let down. Basically you can choose your options which will lead to several good endings + photos taken. I dunno what couldve they done better, but since the cutscene is from 1st person perspective, i dunno why it felt... weird.

Finally reach adventure rank 50, which unlock the ascension for characters. Thankfully i farm enough materials that I have level up all 4 characters i have (including travelers, not focusing on her atm). This month will be super slow burn for me as Im not hyped to get venti or childe, and new 5 stars characters are at least 6 weeks away with patch 1.5). Seriously Im now reaching to point im super bored and only grind to use all resins once in the morning, and once at night.

Path of Exile
OH FREAKING BOY. You have no idea how happy I am. I started SSF in a trade league (because i was suppoed to be joined by my friends). My original plan was a spell totem build heirophant (which got buffed, then nerfed) in ritual league. After holy flame totem maxed & I reached level 92, it feel like Im reaching a ceiling where i can no longer joined. Especially now ritual how have harder challenges (red map + t16 required at least), thus slow progression really depressed.

After series of lucky self found, finally i got just enough stuff to start transitioning to freezing pulse totem build. I self found soul mantle, 2x kikazaru, self flageration jewel and 1 first snow (it was dropped today!). So I make a solid decision to run a new character (which i usually dont like to do whenever i play league) so i can get the threshold jewel in act 5 (took 4 hours). Now my build is pretty solid and Im super happy with it, even though it wasnt optimized (still have left over from fire spell & staff/2hand bonus).

Earned over 100 cookies
PoE last challenge on ritual league done. Now i wait for next league in April i suppose.
#903
1 month

Earned over 100 cookies
Paused on PoE few weeks ago. Did some of those bosses that unlock skill points for atlas map - got the idea, but not gonna waste time with the game.
Black desert - dropped after few hours of play - felt weird, all the controls, questing and such - not my thing. Thanks for the tips

Now playing Divinity original sin 1 - the idea was to play with a friend co op mode. But timings are off and i was fairly new to the game, so decided to play solo and learn more and then do multiplayer. Game is nice, few things i don't like but overall good break from the those fast hack and slash games into some strategy turn base rpg.
#904
1 month

Earned over 20 cookies
Saw some videos about Scrap Mechanic where people build different kinds of machines and then fought each other. Like those robot fights on TV 20 years ago. Looked really fun, so I also got into it. I'm asking my connections if they would like to do something similar atm since it looked really fun. I already managed to build a pod racer. 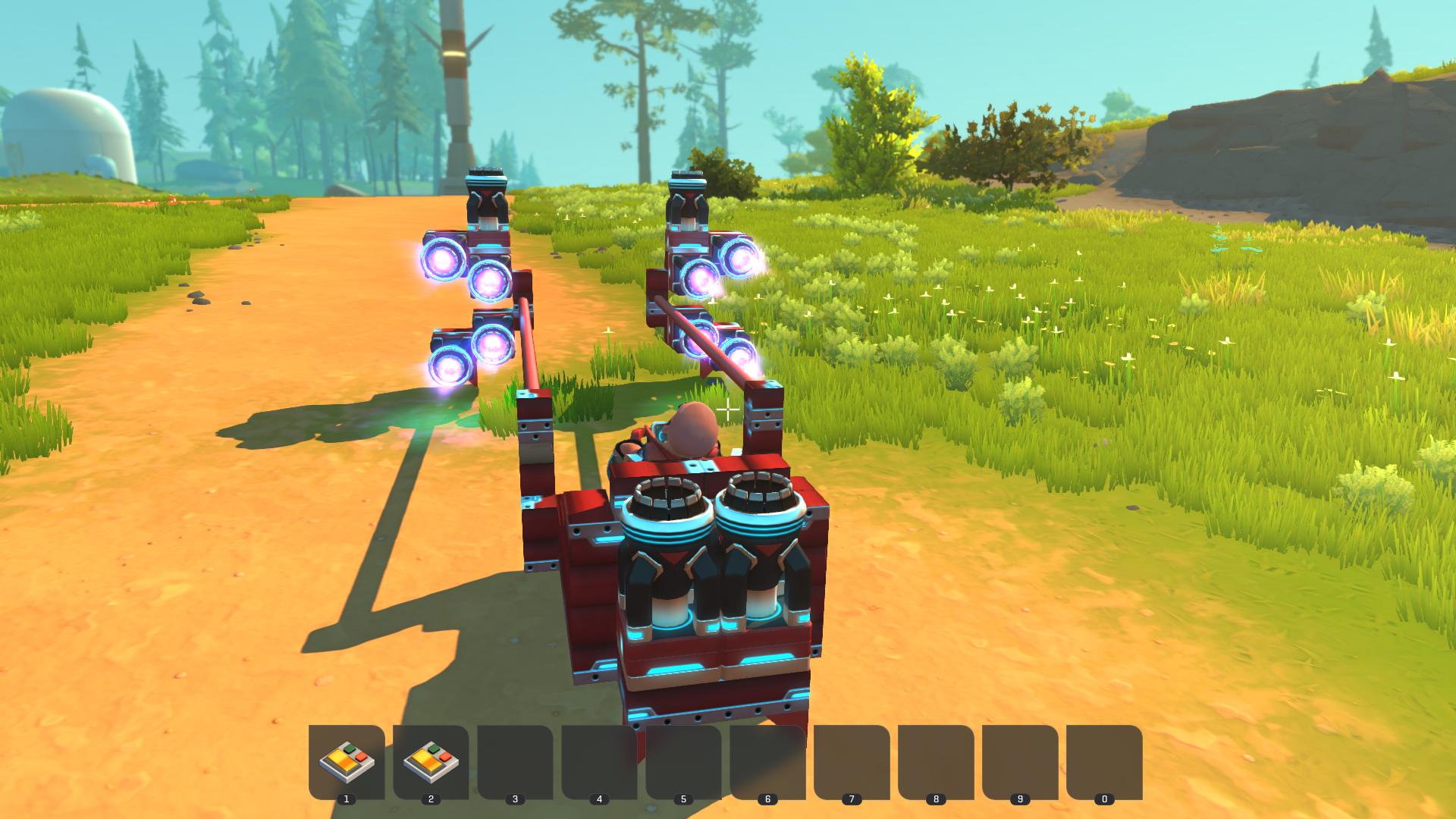 Donated 1 time
I rarely update so soon, but this just important i guess.

Genshin Impact
The 1.4 event finally here! It pretty fun mini games like fallguy, much better if you have online friends to play with. At least it changed from typical monotonous combat that genshin have. I still havent tackle everything yet, but all those stuff like rhythm games, bow shooting round, and obstacles course sound something that more active than that bloody hangout dating sim thingy.

Path of Exile
Even more progress in these 2 days. Got my first ever 6 link myself (with steam achievement) with about 300 fuses. Got a better roll soul mantles, big progress with maven encounter (2 more to clear for 6 bosses). Sirus is almost activate, 1 more conqueror to go. I found my first delve boss node. Got a cortex map. Simulcrum orb ready. All toward this 24 challenges goals that i needed asap. As my prediction earlier, this weekend was supposed to be my target end limit with poe as I have spent too much time with it, far greater than any my previous poe history. I felt I do i get hooked, but I dont want to want to spend more hours while neglecting many others steam games on my backlog. 200 hours played so far (including afk, and im SSF)

EDITED:
Beaten the delve boss, that made my racing like crazy. I think my survivability is ok. But since freezing pulse is kinda crazy with amount of particle (my biggest gripe with poe is particle effect), made me harder to see what the boss can throw at me. Several times i see my health drop but i never knew what caused it. Thankfully the game generous to give me 2nd try, which i finally beat it. I heard there is another delve boss that is much tougher.
#907
1 month

Earned over 100 cookies
less than 1K hours to wonder wtf have i been doing with my life.

im possibly drop both poe and genshin at end of this week. Im need to prepare for transition of my life where i will be in office every days in next couple of weeks. So being FOMO (especially when playing gacha games) or urge to grind everyday might ruin my daily life, especially im commute on train + work take rought 10 hours away from my gaming pc minimum. lets just say i want to adjust my daily pattern (especially the lack of sleep) back to normal first.

My god, my journey with poe this time around is remind me of grinding mindless in old korean MMORPG where you know the destination, but every minute you play feel like digging a tunnel with a spoon for light. It broke many of my personal record (longest hours for the league, highest leveled characters, tackling highest level content, beating some of endgame stuff from other previous league, almost fully explore all atlas map etc).

Some might say it was slow or inefficient (this league took about 6 weeks to clear 24 challenges), but for me, THIS IS MY PRIDE & ACCOMPLISHMENT especially when I have been enjoying playing SSF grinding slowly until in managed to get all necessary ingredient. Since i still have time on sunday, i will use that time to tackle sirus again (failed several times already) and maybe others endgame stuff as long as it doesnt need too much grinding.

Just like Diablo 3, perhaps this probably my last league until poe 2.0. Was i burned out? Probably. But i said earlier in the post, i just want to transition routine of my life after months of unemployment.
#909
1 month

Earned over 20 cookies
So... I made this flying thing in Scrap Mechanic.

And this is how I get in and out

Unfortunately, it's not working 100% as I want. I have balancing issues in the air. If I can somehow manage that, I'll be able to also install a thruster for forward movement. Once that is done, I'm finished with that project.