Earned over 100 cookies
I am already using semi strict filter

You have no idea how much crap is on screen when i press Alt to pick up good stuff.
Alteration orbs is good for map rerolls and to trade for chaos.
#971
2 months

Donated 1 time
After realizing i have been playing Hearthstone Battlegrounds and Slay the Spire for excessive amount with no progress (at least that one i felt worth it), I just decided to uninstall both of them so my mind can be at ease and stop mindlessly trying to get good run with it.

There are hundreds of games from Humble Choices, but and yet I dont feel like I ever in good mindset to play them. Felt like want to play diablo3, but I dont really like much of the current season offer (despite follower overhauled), so I will just play any games that I have installed atm just to forced myself to complete new game. Probably just need to finish Metro Last Light since this month I will get Metro Exodus.

*Not in the mood to watch anime either, since both game is not something that I can chill & watch anime at same time. I need some open world games or ARPG that fit the criteria.
#972
2 months 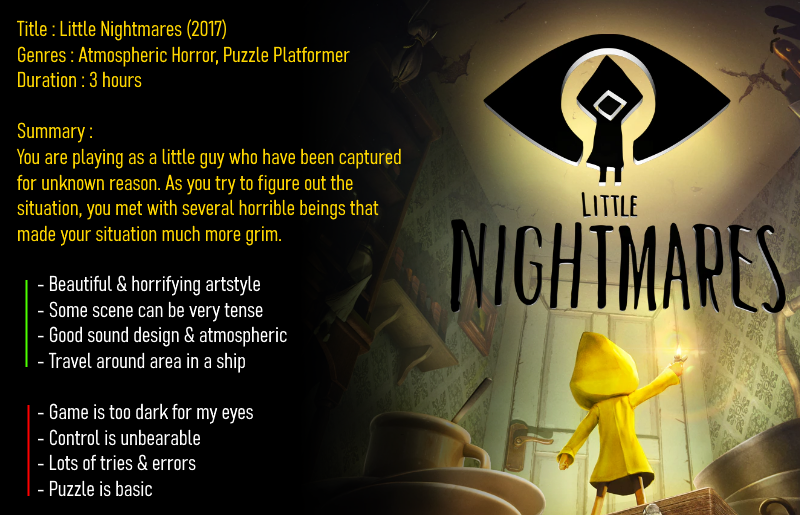 This is a tiny indie games under publisher of Bandai Namco (I assume western developer) which the game I got free during the pandemic. I dunno how i have left this game untouched, but Im sure need to forced myself to finish this game.

Lets discuss the good part. If you want some sort of horror atmospheric in form of puzzle platformer, this is a game for you. It does have various encounter type of hide & seek, chase scenes, puzzle solving as well as terrifying platformer on the ceiling. The enemy .... creatures is pretty scary especially when it suddenly start to see you and chasing you for long time. Sound design also bring out the mood especially when you it play around the environmental audio. You have to play the game yourself to get what I meant, especially for several big encounter.

However the game not all great though. Since this is a 3D game with some sort fixed camera perspective, judging your position is pretty hard. If you missed your position even by millimeter, you will fall to death easily. There is some sort of weird internal games logic where you think specific are climbable is isnt, stuff that you can pull isnt and even your clever puzzle solution, the game wont allow you to break of scripted event. My biggest hatred is because I cant play dark games, despite Im pulling the brightness the bar, I will hate if I can differentiate stuff in the dark (even though it might be cheating).

At the end, if you get this game for free, I can recommend you to play game without using walkthrough (although I did cause me to rage quit figuring stuff out for couple of times). There is no reward because the story & ending is non existence and purely waste of times.
#973
2 months

Donated 1 time
I wanted to try VTM Bloodlines but sadly couldn't get it to work on my PC. Then I decided to play Star Wars kotor once again (great game) after many years, this time with resurrected -mod which was a disappointment, it just seemed to add some more empty running and fightning so no wonder developers removed those from the game. After finishing that tried to install the Sith Lords but seems like it has common issues with Win 10, tried everything but couldn't get sounds working and many times it crashed after char creation so I gave up. I have finished it many times years ago so no problem.

Now playing Borderlands 2. I loved the first one and so far this hasn't disappointed either. Much harder start though imo, of course it might be that I started with Maya and playing solo, or that I haven't played FPS games in years. Anyway having a good time, I'm only at the beginning (lvl 9), don't see much changes compared to its predecessor. Only thing I hate about this game is the save/checkpoint system... if you quit the game and start again later you spawn at the last fast travel -point (not checkpoint -post), so you are forced to finish the area/quest-line (which are loooong) in a one go. At the beginning at least this has been tedious as I had to advance slowly due to having shitty weapons and ammo limitation. Maybe it's okay for those who can play for hours in one sit, but I'm not that kind of player and life is sometimes pretty hectic.

Also got Witcher 2 but before I start that I decided to play Witcher EE DC first. I played Witcher around the launch date and it was so freaking buggy, sometimes I had to start a new game or load a save from 10h ago as progression was impossible, I still did it because I love the game and finished it twice. I see that EE has fixed pretty much everything and so far it's been a great pleasure to play this wonderful game again without worrying too much of getting stuck. Really recommend to old fans to get that new version.
#974
2 months

Jampula wrote:I wanted to try VTM Bloodlines but sadly couldn't get it to work on my PC.

Try getting the GOG installer for VTMB. You probably tried to install the old original version, the one that wasn't coded with win 10 in mind. The steam version also works though you have to do a lot of things manually yourself so i don't recommend the hassle. Get the GOG version, its retroactively compatible with win 10 because DOSBOX, iirc its got the unofficial patch with it bundled up but even if it doesn't you just download and install over it anyway.
#975
2 months

Donated 1 time
Thanks, GOG version worked, well at least the game started, char creation screen opened, made a quick random char just to test it. Creation seems pretty deep and complicated so I have to return to it later when I have more time to study it.
#976
2 months

Donated 1 time
I dont see light at the end of this boring tunnel. 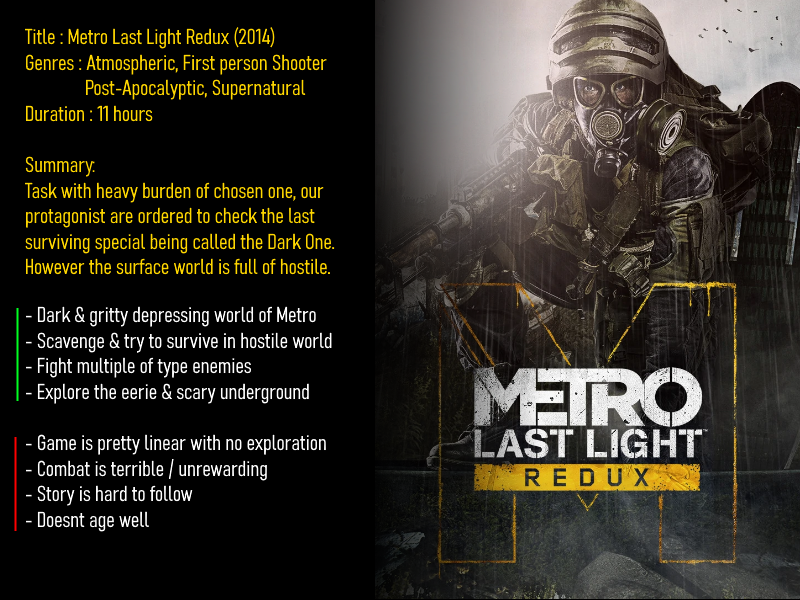 Ok, this series have long history being one of the earliest game that my old PC couldnt run properly (think like crysis in 2010) that have some nice light effect and realistic gameplay.

I will review this game as game that you play at current year, playing the "redux" version which I assume some sort of remastered version that designed to run on modern OS. As casual I am, I just play the normal difficulty game which I assume affect how hard the game will be and how immersive it will be (seem like there should be HUD-less option). Anyway, my praise for the game is limited. The artstyle is was I considered in dark gritty & ugly side. We move from a level to another level in linear fashion. Only the small town where you can restock / buy weapon is what considered good points of this game.

Gameplay, I have so many issue with it. It can separate to 2 major section between stealth & large scale battle. For stealth, the human opponent is laughable. You can use the OP knife or silenced pistol to snipe most of them. Once they realized they under attack, they will panic like chicken. As for monster fights, my god most of them are bullet sponge. Even sometimes 2 shots from point blank at weak points isnt enough to kill them, make them feel inconsistent. Worse parts are you need to juggle between your filter for your mask, your medical kit as well as reload weapon at snail pace while being surrounded by 5 or monsters at same times.

Perhaps the game was ok back in 2013, but personally I rather player many other single player game. The story is there, but I pretty much dont care about it. The sad part it is hard to get good ending, and "my story ending" will be retconned in the next game. Even I got the game for free, even when I forced myself to play this game, at the end my only feeling was .... meh.
#978
2 months

A rapid short review. As Im frustrated everyday trying to find a game that can pull me. Just a random trivia, this game was recommended by Total Biscuit (RIP) that couldnt click to me.

If the game have long ass tutorial, that mean the game is to complex for new player. This is the exact problem i have with this game. At the beginning you only taught all your basic combo as well as advanced mechanic. The game then throw everything away and expect you to know every little details from its turn based economy management. I mean, Im playing a freaking brawler, why do I need to worry about resource ala 4x games? The combat do have some depth to it, but I just dont care because it feel smooth at the animation level, but it doesnt have what i called "combat fluid" like other 3d brawler like arkham / shadow of mordor combat. Worse part? Each of the combat battle have some strict requirement in order for you get bonus rewards.

I got it free on epic games, but it didnt managed to pull me to keep playing. Probably I shouldve written this review. But if you somehow want some 2D brawler with some turn based economy strategic decision, feel free to play this game.

*Seriously, just play one finger death punch instead. Even if it is more repetitive, it was much more fun.
#979
2 months

Earned over 100 cookies
Stash tabs on sale in PoE rn. Just spent about 50 euros getting the rest of the tabs i never ended up buying plus a few quad tabs. No more spendings on games for me this month.
#980
2 months