Earned over 100 cookies
Iwan, it would be nice if you could also include overall rating at the top. From 1-100 or the classic 1-10. In the description you can include the various other ratings that make the overall one. I don't know, it seems appropriate to me and more efficient.
#831
3 months

Donated 1 time
I have plan for some sort of rating, but it would be tricky as it is kinda subjective to give overall score.
Because different games have different production budget, not fair to judge them as equal.
Not to mention the scope of the games. Some are short, while some are pretty long with tons of padding.

Same goes for price as well, while I personally love budget games and i got most of them from subscription
Kinda hard to judge when I also have steam regional discount (50% off) on top of the usual discount
Batman Arkham Knight is no brainer when it is just 5 usd after conversion for complete edition for me.
It also was hated for problem for bugs during launch and design decision

Anyway, I will try to find a way to streamline it. Probably in form of picture.
Since putting gigantic poster picture felt useless except for showing what games Im talking about.
#832
3 months

Donated 1 time
Have you tried to turn it on and off?
(Click on image for steam store link)

First person puzzle genre is one of easy way to create a engaging game without needing complexity like AI. However it quite tricky to design complexity especially when you have small team.

This game is about manipulation of light. Basically if you step on shadow, you will die. So in the beginning you pretty much playing around a simple portable spotlight to create a safe passage for you to reach next level. While you doing all this puzzle, there is a small narrative in the background that basically work as ear candy while your brain thinking for a solution. They are quite pleasant to hear especially it is kinda semi dynamic that mock you whenever you took longer time to complete the puzzle.

However I think the game is suffer from being too simple. While the mechanic of the game is something new, the way complexity of the game only reach a new level barely in middle of the game as well as the last level. Made it pacing kinda bad in my opinion. As someone who are good with puzzle games, this felt too simplistic and easy that I easily get all achievement in just 3 hours and half. Nothing much to say about the game except it blend well between cartoonish colour shading and a way to show to player which area are in dark or light.

Should you buy this? Im not sure tbh. When I saw the lowest price, the hour-per-dollar ratio is pretty low. My suggestion is to try the demo first, then you decide if it worth the money.

Alternative : Portal series is no brainer, but I need to introduce you guys to godly puzzle games of Talos Principle. As for another smaller first person puzzle are game like Qube series & The Turing Test.
#833
3 months

Earned over 100 cookies
Terraria with two friends. Got it on steam when there was a sale (4.99 shekels). Really enjoy this game at the moment, love the feeling of discovery of how stuff works in general, plus cave exploring, boss fighting, item crafting and dungeon raids with friends.
#834
2 months 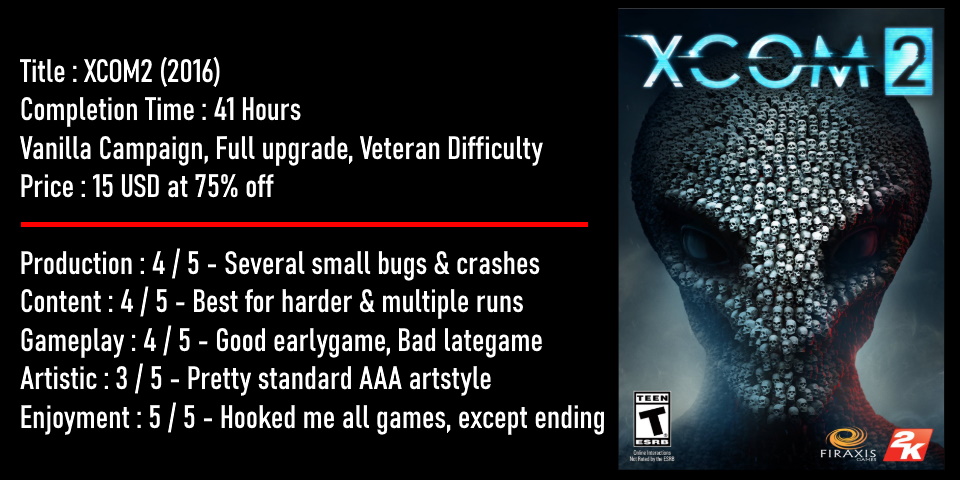 XCom 2 is 2nd entry in the franchise after Enemy Unknown & Enemy Within (except the third person spin off) that retain most of the modern of the Xcom. This is quite an old franchise back to 90s with several games in the entries.

XCom 2 started from a bad ending from the first game where the alien managed to conquer the earth and assimilated all of the big cities. On the surface levels it shown that the alien are willing cooperating with human and live in harmony. However it is not all what it seem on their agenda, you as the one of old day commander (from first war), you were task to build up a new army and fight against the alien invader. The game split 2 big sections, one is about base management where you plan the progression of your base and another one is tactical turn based combat where bring a small squad of Xcom.

There are several improvement from the first games, from concealment to speed up the early ambush, several enemy encounter events design, new enemy types, tons of customization, as well as new beautiful airship carrier that served as your base. The game is kinda tricky as you will encounter new enemy type in the beginning of the games, while at the same time you barely scrapping any resources to survive. Personally I was worried because games are now designed to be timer based, emphasize on clearing missions quickly, but once your reach mid games, it became much more easier.

Granted I was save scumming as heck in this games. Perhaps I should played harder (veteran difficulty is normal), but I was super close to losing in the beginning, so I guess the game run out of steam near the end as I delay finishing final mission to upgrade all weapons as well as establishing relay station in every region in the world. There game also have some annoying bugs with its performance issues as well as the UI (user interface). There are also several times my games crashes (3 times on final missions...) that made mood abit sour.

Should you play Xcom 2? I personally say yes, but many people on the internet recommend you to get the expansion pack (War of the Chosen) and play that instead. If you dont mind save & reload a lot, or dont mind having some failures in this games, then this is a game for you.

► Show Spoiler
Any review feedback / suggestion appreciated, if you want me to include more useful information, I will try improve the format and make it easier in the future. If you liked the review (or any of other previous reviews), some cookie is appreciated so i can get better medals lol.

It seem like I hit 3 years anniversary with this thread, with first post was made back in 1st Dec 2017. It have been a while
#835
2 months 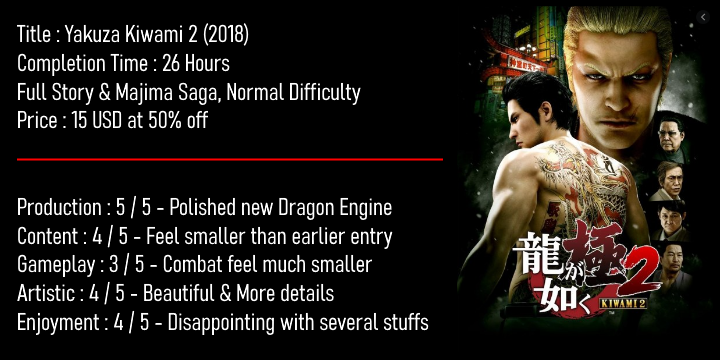 Again, this is a remake from early Yakuza 2 (2008) which was released on PS2. This time around, instead of remaking using the Yakuza 0 engine, it used the new Dragon Engine which have several graphic enhancement & quality of life changes.

Story begin after ending of Yakuza 1 where there are big escalation that lead to huge war between east & west (Kanto vs Kansai region). Our protagonist who was supposed to be retired from yakuza life, have bear a burden of bringing this war to end by participating in a peace talk. Without spoiling much of the story, there are some shadow organization & evil mastermind that wanted the peace to failed and executing several moves to weaken their enemy. While all this happens, there are dark secret around east Yakuza that our protagonist entangled with that he must resolve the whole story.

First we need to talk about this new engine. Being a fan who only played 2 previous Yakuza series with Zero & Kiwami 1, this new engine does bring a lot of graphic improvement & more graphics details to the environment. Combat & entering interior of building no longer have loading screen (except for some) made it flow much smoothly. The game are still using 2 heavy recycled major areas from previous entry, making it a pleasant surprised to see the transformation of those area for the past 20 years (in the game of course).

However with the new engine, it bring a different combat mechanic. This combat while do have a lot of nice free flow features, it felt lack of options or variety unless you really into using weapons. While I kinda appreciate that whenever you helped a random NPC in the game, you will be given an option to upgrade a skill that will allow that NPC to give you some weapon. The new minigames apparently abit buggy on PC if you played on 60 fps & it is not that interesting to me. Something is wrong if the most best thing I like in the game, is freaking arcade game called "Virtual-On".

Kiwami 2 to me failed to bring something new to the table. While storyline is usual Yakuza series type, I kept have feeling that I just wanted this game to end and I kinda rushed the whole story & side story without caring about side content much. It is kinda good games, but lets just say Im disappointed with it in many aspect.

Alternative :
Yakuza 0 / Kiwami 1 : No brainer suggestion, you better start with either this 2, have a lot more depth & combat mechanic.
Sleeping Dogs : More GTA with triad setting in the Hong Kong. Actually combat is pretty juicy
Mafia series : I cant say much anything about other entry except number 3. Crazy turf gang war as usual
#836
2 months

waited 8 years for this game. the least they could do is get rid of all the bugs that take away the immersion at the worst possible times. NPCs with no lips moving but still talk? check. floating loot on dead enemies even after you pick it up? check. really weird clipping issues with most of the game's assets? fucking check. and many more.

the game is pretty awesome, still worth the wait somewhat and im glad im finally playing it but ffs bro, you even went into crunch, fix your damn game. day 1 patch fixed even more bugs than the ones i mentioned but this is inexcusable for an 8 year long wait.
#837
2 months

ClausOliver
Fallen
1 | 0
0
I am playing path of exile, new activities have brought me new fun.
#838
2 months

Atm, im on slow burn while gaming. While new humble monthly got several games i wanted to play (indivisible & one stop from eden), im right now just finishing games that already installed on my pc, but i have been postponed them since I played Destiny 2 (6 months ago). Even then, im not sure for how many of them i wanted to finish. My hours on steam are practically halved than before.

Then, I will subscribe to Xbox Ultimate Game Pass, which I will abuse to play as many modern as possible with it.
To whoever interested with it, you just to register with microsoft + xbox id to get the benefit. It is just 1usd for 3 months (promo end in 3 weeks iirc)
https://www.microsoft.com/en-us/p/xbox- ... q7ttc0khs0
There are at least easily 10 games i wanted to play from there (Ori 2nd games, Resident Evil 7, Street of Rage 4 and many more)

EDITED
Just spend like 20 minutes to go through all available games on the list, finalize with this for now.
I hope my friend doesnt pull my leg too much here. I just wanted to complete darksiders genesis & a way out at least.