Won 50 auctions
I think there is certain amount of players that find their favorite build and stick to it, trying to improve it, searching with new possibilities is always the option, but in reality there is only 1-2 spiecific item, that player will find is 'a must' and other substitute cheap or no cheap will not work that well.

I remember when you reduced stormcalls damage, reduced stormlord's bonus and introduced new skill to holy tree that soon became a top priority build for everyone who wanted easy access to charms. Next patch you decided it was too strong and reduced it. This might be considered success to save holy tree but I never liked unholy has been sacrificed.

So when they see unreasonable changes in next patch that drastically hits their build in order to promote other unused builds they starting to question integrity of the game.

The perfect example from Realm is one player who used to play amazon for few patches and he used to pay nice amount for bowgear, to my knowledge he spent at least 2000tg to realise his build is not what it used to be and he cannot clear some uber levels like he wanted it. Sadly I don't see him anymore and I don't think this is just one single case.

I might be wrong but my personal opinion is that it was not wise idea to weaken the most popular builds to enforce players to try something new, because as I stated in the beginning there are player who wants to stick with one build and they will probably not accept these changes. Peace
#101
2 years

I picked up my Horadric Cube and when I placed it in my inventory it disappeared. I had the boots for my build and the gems I had removed still in the cube. Now I cannot wear my equipment due to lost stats. Very disappointed. Im not sure how this happened. I looked on the ground and in my bank and all over the town. The cube is gone.

Please help me understand how this happened. I do not want to farm lower level game content to get back to where I already worked towards.

Thanks for taking the time to respond. But don't lie, you enjoyed picking on me.

Also, sorry for posting another wall of text.

Before I begin, I need to clarify a few things, because it seems some of what I wrote was misinterpreted.

Now, on to your points specifically regarding Living Flame. I'll address them 1 by 1:

I sincerely mean no disrespect here, but you dismissed my post as “rubbish” while the majority of your own rebuttal consisted mostly of straw man arguments. Many of the things you brought up were points I was never arguing in the first place, so it's hard to make the claim that what I wrote was wrong when much of what I wrote was either misinterpreted or something I wasn't even arguing against. And as to the claim that those who upvoted my post are people who just “don't know any better,” that's disingenuous. For all anyone knows, they upvoted my post because they think I'm sexy (they're not wrong, ofc

To be clear, I'm not shitting on you personally, any member of the dev team, or the mod itself. I simply expressed my personal thoughts on the changes made in this patch. I'm fully aware that I don't know everything, and I'm open to having my positions challenged and my mind changed. But if and until that happens, I stand by the points I made in my previous post.

(I still think assassin suffers from 'only-viable-when-full-farmed' and 'your best attacks are Oskills' syndroms, but I reckon it has been kind of a meme recently, so... but I like Prismatic Cloak. Conceptually at least. I am still trying very hard to make a strong claw assassin. SP of course. Would never play assassin even with 0.05 s lag. And I have a small grief against SinWar because I -probably incorrectly- believe it damaged SP a bit.)


@heathen Elementals aren't superior to damage mitigations on your character because they cannot soak all hits and are unusable in many endgame quests. And you still have blade spirits which are incredibly tanky with some investment.

EQ + Lion stance: those skills have been massively buffed since Ultimative. EQ especially, twice the WDM, over twice the added damage and a bigger hitbox. Some skills will always be inferior to others due to their mechanics. Windform has its uses, not all skills are main build skills.

Summoners: have been getting improvement after improvement, overall are in a much better spot compared to before. Some ubers will always be unfair to minions simply because minions themselves are unfair. Free supply of 200k hp tanks that can also deal pretty good damage and leave your character free of aggro?

I think your comments are a bit unfair to be honest. All of your points are something we have massively improved upon over time.


@thunderman Unholy was nerfed because it was too strong. Holy trees were buffed because they were too weak. Those two had nothing to do with each other. I get it - people always want alternatives to be more equal, as long as it's not their build that gets equalised. People knee jerking to 20% damage nerfs, thinking their build is dead - it takes you 6 casts to kill something now instead of 5 - are the reason for my initial post.

Nothing that has been nerfed is unplayable. If someone really enjoyed the play style of a certain skill then it is still playable. If they didn't really care for the play style and just wanted to be op, then they can choose the next top build - there will always be one. This is a mod for a 20 year old game. If someone quit because their favourite skill does 20% less damage, then farewell. Life is too short for either of us to worry about the other. Catering to these people is never good in the long term.


@solfege To me it looks like we are in agreement, not the opposite. The only thing I responded to you was about you claiming that the LF regen is useless for sorcs. I didn't mean to include you in the chorus of doomsayers.

In general, I get it. People are not fans of the Ice Ele change, that's fine. The whole point of my post was to show that sorcs are perfectly capable right now thanks to cumulative buffs to less used parts of their arsenal since 1.0, and that this one nerf doesn't mean they are dead.


Let's keep it on topic now guys. I don't mind responding to the occasional discussion via PM or in a dedicated thread, but this is not the place for it.
#105
2 years

Won 50 auctions
Using launcher on TSW. This is about the 8th time it's happened where I've come back after 12-24 or more hours and my character is totally unspecced. 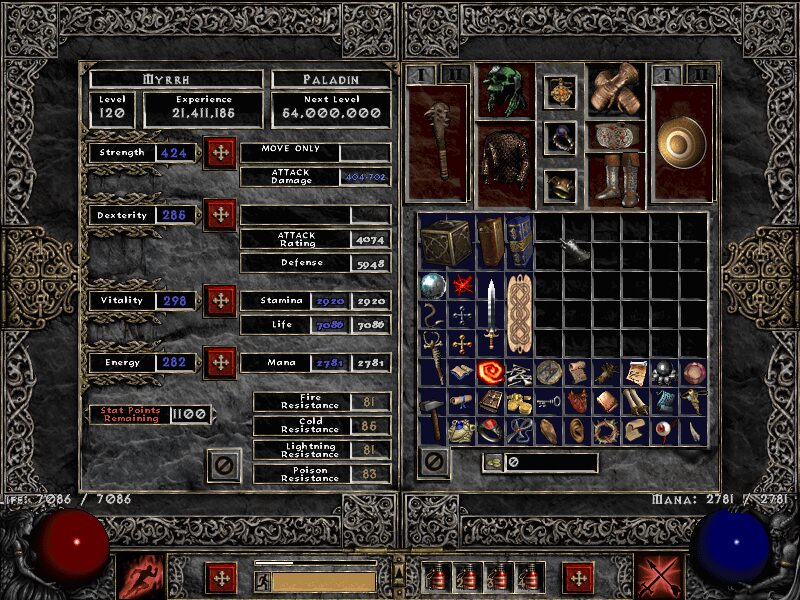 I am unable to get D2 to even start.

EDIT: still not fixed can anyone help?

Median xl is for 1.13c if I am not wrong, so your game should be patched to 1.13c, if you have the latest patch you should downgrade your game, about that I don't know much so others could help you about that.

So, maybe clean install, then tell us your game version before proceeding further with MXL.

I think Wolf stance do not add the correct %dmg.

My stance should add 250%ed, but it improve my max dmg by 300 and d2stats said wolf stance add only 60%damage
I did try with lion stance, Lion stance looks not bug'd

edit: It will patch'd in current season or should i respec to an other stance ? An answer would be awesome

LandS
Thunder Beetle
52 | 1
144
My Sorc Mathea is bugged and can not join games anymore on TSW. Other characters can join/create games just fine on my account. When game servers restarted i queued with the Sorc, then once they were back online servers tried to put me into game but failed. Please HALP ;(
#110
2 years