I have a TP open to return if I die, but after dying sometimes when I click tghe TP in town, instead of going down to Duncraig it just disappears and IK'm stuck in town and have to run back.

I've had this happen 3-4 times now in 2 full duncraig runs. It only happens about... maybe 1 in 5 or 10 times of going via TP from town, so not easy to reproduce. And it only happens in going down into Duncraig, nowhere else.
#111
2 years

Has won a forum contest
Bilefroth Skin doesn't align right when worn in the armor slot... The bottom gets visually cut off
#112
2 years

I wanted to share my thoughts on the new sigma compared to the older versions. I really like the bigger resolution, bigger inventory/stash, the range of the spells are perfect for the bigger screen which we see, its awesome! Its even more awesome with the quick keys for the cube to put in, take out items, thease working for the inventory aswell to drop items to the ground, the quick key to transmute items is incredibly useful, and the quick key to toggle item pickup from the ground with the instant reveal button, they are all just really awesome. I really like the whole new running system aswell, but the best thing about this major new patch was that the majority of immunity is gone from the monsters and apparently even from the player skill aswell wich is a bit sad for the necromancer and paladin i guess.

About the stash size, i think it could use some more stash tabs to further increase its capacity, so it wont force players to have alternate character(s) just to keep their items somewhere.
Some of the completed set items feel really weak and underwhelming to play with.
The new buff/debuff indicator is really awesome to have but it would be much better if i could hover over it and it would show a tooltip describing what that buff or debuff gives


I liked the idea of a new HUD/UI but the new textures feels a little like they are cheap, not well made, or i just dont like them, im sorry, and i really miss the option to toggtle the opened state map to be transparent around the user or the whole thing. I dont like the minimap type of map, its just too small, an option for it to increase or decrease its size would be welcome, or at least i would like to freely place it anywhere i want to make better use of it.

But what made me stop playing the game was when i reached the first wave of dungeons at level 105 i realised that all the dungeons have required levels to enter so in between 5 levels i simply must farm for experience, and i could only take it to level 120 where it became really slow, and i just want to try to play through dungeons and rifts but i cant do that unless i run i dont know 16-20 Duncraigs before i get to lvl 125 again to be able to try some of the missing ones again

But its just my opinion i wanted you to know, really love the mod but it just became too slow for me like this.

plts88
Acid Prince
49 | 2
10
While holding shift and using "Move Only" -skill (mouse1 or mouse2), the player position does not change on the client, but move command is sent to the server. -> Player position goes out of sync for a while.
#114
2 years

Donated 1 time
I don't want to sound harsh so just take this purely as my opinion. You know what I hate? Games became really easy. Mainly because millennials are bunch of pu**ies and always whine about something. Take it as a bit of a hyperbole but I really believe it. Have you played something like Another World? Or Albion? I hate how there is basically no leveling in D3. You just equip two items and you're max level in one hour. All the compases and handouts...it's just bs. Take it this way. The game is the easiest in its history. Doing 15 Duncraig runs is nothing. The ONLY grind in game (appart from normal item/trophy hunting) is leveling above 140. You usually don't stand a chance in ubers above your level either without really good knowledge of the game/mechanics and/or good gear (more Duncraig runs = higher chance of getting good gear). You would have to go back anyway. Those ubers with timelock would be just rinse and repeat and there would be no point in them. So just think about the point of game and your "convenience" once again guys. This game is dope and very well thought throughout and you not enjoying some parts is just not a reason for changing what is good. Again, no offence, just a bold opinion.

EDIT: So to be "constructive"...I'm begging you devs, don't make the game even more easier. Just tweak the OP Barb and bring back summon necro. The game is in its best state ever!

Won 50 auctions
there's a difference between games becoming too easy and forced grinding. its already known that xp rates need tweaked in some places, like 115-125 being slower than normal and then bremmtown for instant 140, etc. just really mindnumbing to play more than 1 or 2 characters anymore.

pushing users to playing the game's uber content is cool and all if powerleveling can be properly fixed/removed.
#116
2 years

trybane
Fallen
1 | 0
0
So I ran into a bug when running Necromancer. I was using totems and apparently at some point while swapping between the two totems I have unlocked (Death Fury and Frostclaw) at some point I stopped being able to summon Death Fury totems. When I try to summon them, I get Frostclaw totems instead, requiring a body and everything. I am unsure what the issue is, and trying to change my hotkeys, restarting the game, etc hasn't helped me solve the problem.
#117
2 years

Earned over 20 cookies
Not sure if reported before and/or intentional, but here's one - enemies spawn there, you can blink there as well; actually had a venomous essence drop there funnily enough 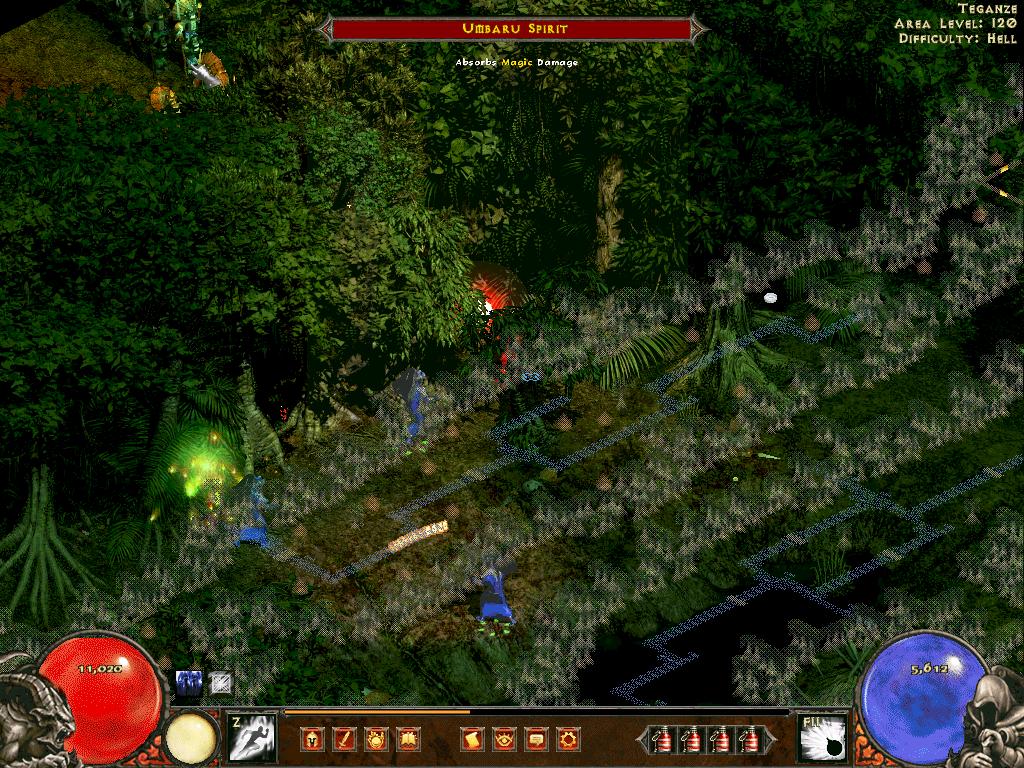 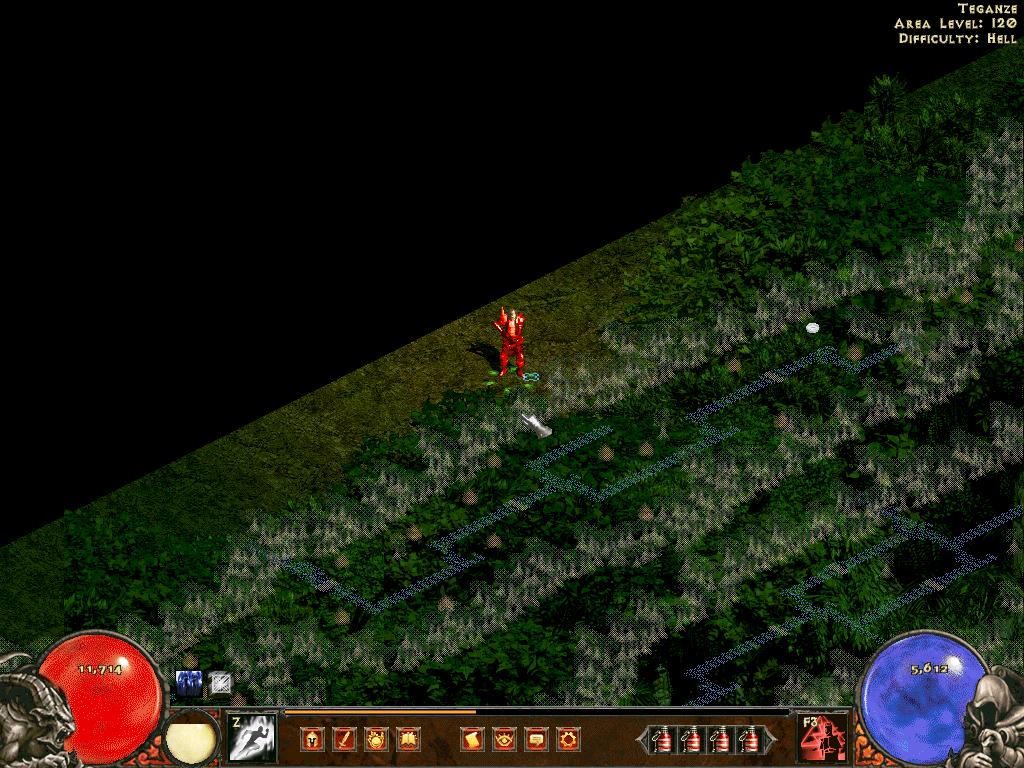 Canvas
Invader
8 | 1
0
- Poison Flash lasts too long and damage per second is too low for a melee-range attack. Also, hitbox feels off. Hitbox doesn't follow when you move. Makes faster casting useless for this.
- Plaque avatar poison spreads too slowly. Compare it to Rotting Flesh.
- Grisworlds's heart's existence makes Rebel unneeded. Either change Grisworlds's heart into other item type like gloven or helmet or remove rebel.
- New tiered uniques have soo much life regen. But runewords don't. Why? Please adjust.
- Some weapon types need more runewords. (sword, hammer and so on
)
- Wild and free is now bad. Please make it make you faster again or change passive to more useful one. Zon already has 10% more speed than others. Since speed is capped, this passive's base point value is bad.
- Balefire needs life drain removed. Else it's okay.
- Caster Stormzon has no single target attack. It's bad for bosses.
- No necro tiered unique dagger focuses on physical damage. That's bad.
- Rotting Flash is bad. I don't need 2 poison skills in 1 tree. Make it into a life drain curse maybe so it works with pestilence?
- Melee necro attacks are bad. Please buff.
- crossbow necro has 2 skills that need minion or dead body. Make Death shards cast from necro's position maybe?
- Wildfire mana cost is too much for fire warden.
- Make Mark of the wild into Gift of the wild for druid. Quality of life for parties.
- Very nice patch otherwise. Really good. Thanks for your work!