Request MOD to Compensate me

Donated 25 times
So i have been grinding all day and night to gather XIS runes and then when finally made a Natasha legacy .. this happened. 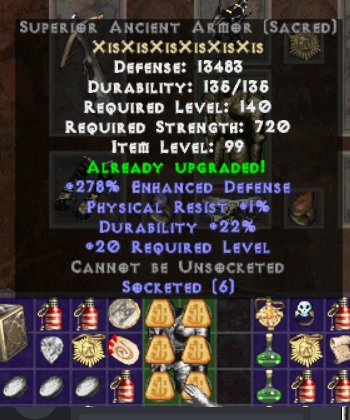 it literally says NO where on the Docs that this armor is ladder only or if the armor was actually removed from the game, it wasn't also mentioned on the patch notes.

All what was mentioned was:
"Endgame items (SSU, top tier rare affix rolls, XIS rw): reduced the bonuses to All/Class skills by ~15% on items which were giving high values of this stat, in order to keep skill points more relevant for skill level scaling abilities in the late game"

Runeword tweaks: removed negative mirrored rune stats from Runewords as this "negate" effect was inconsistent. This was especially prevalent on runewords whose rune stat was changed over the years, as well as empowered Runewords which were sometimes giving an augmented effect of this mirror effect (i.e. a rune giving +10 to strength would give -50 strength on the empowered Runeword)


her is a picture from the docs:

i worked so hard for rolling bases and getting these runes, i dont understand maybe it is some sort of bug.

i appreciate the mods interference in this as i donated TG to this wonderful game and i have spent plenty of hours playing.
#1
7 months

Donated 1 time
I'm curious about this too, I asked in short questions thread and noone replied, are there any differences in ladder versus single player?
#3
7 months

Won 50 auctions
I also did this, but in ladder, compensate me as well please. Also, don't pay attention to the fact that my furthest ladder character is only in Act 4 normal.
#6
7 months

Anonymous: wrote:So you made this armor in SP ?

Will keep bump till issue is resloved

Ruubel wrote:Nonladder and so far documentation unchanged. And at nonladder char my natasha dissapeared ( average roll, even worse without+skils, but still).

That sucks. Please note this in the patch / documentation if it is indended... I was farming Xis the last 2 days in SP and am guessing it doesn't work there as well now.
#8
7 months

also what is going on here

Patreon Contributor
Flyon and I spent hours making this only to be disappointed.

The whole point of the Xis/Enhanced RW system is that it CANT be unsocketed, so this page REALLY needs to reflect what things can and can’t be made in, starting with NON-LADDER/LADDER (if that’s actually a thing). We only got one shot and wasted 6 tunes and countless hours.

There’s a difference in making something you know won’t work (because there is ample documentation) and not getting the outcome you want. I got to make new friends but I also lost my Gris’ Herald. Please update the community on these RW issues