+2
Edited by Esbee 6 months.
Bljadzon
Cultist
23 | 1
0
I've quickly respecced my bow druid into caster to check new changes, and while I find it very pleasing, and am overall thankful for the great content update, I immediately noticed one issue.

Since the fuse on Hunting Banshee has been reduced to about half as long (which is amazing), the radius of effective usage has decreased dramatically as well. It's not even going offscreen often, or hitting anything at all, just fizzling.

I would kindly suggest to increase projectile speed of Hunting Banshee to 1.5 of what it is now to compensate for it. It's a minor change which would be appreciated.

Other note, shotgunning RoF is amazing, great damage. More quirky to aim, but unlike with Banshee, that's the flavor of the skill.
On Pagan Rites - a great flavorful passive. Amazing feedback. It works kind of like LaeK, but a bit more tactical. Maybe positioning so you ration your corpses would be a thing.
Love the visuals on Harvesters. Previous ones were bland and flavorless.

Donated 5 times
The buff icon for barb stance buff doesnt change with stance change. Would be nice to see the skill icon be the buff icon to know which stance is active specifically.
#3
6 months 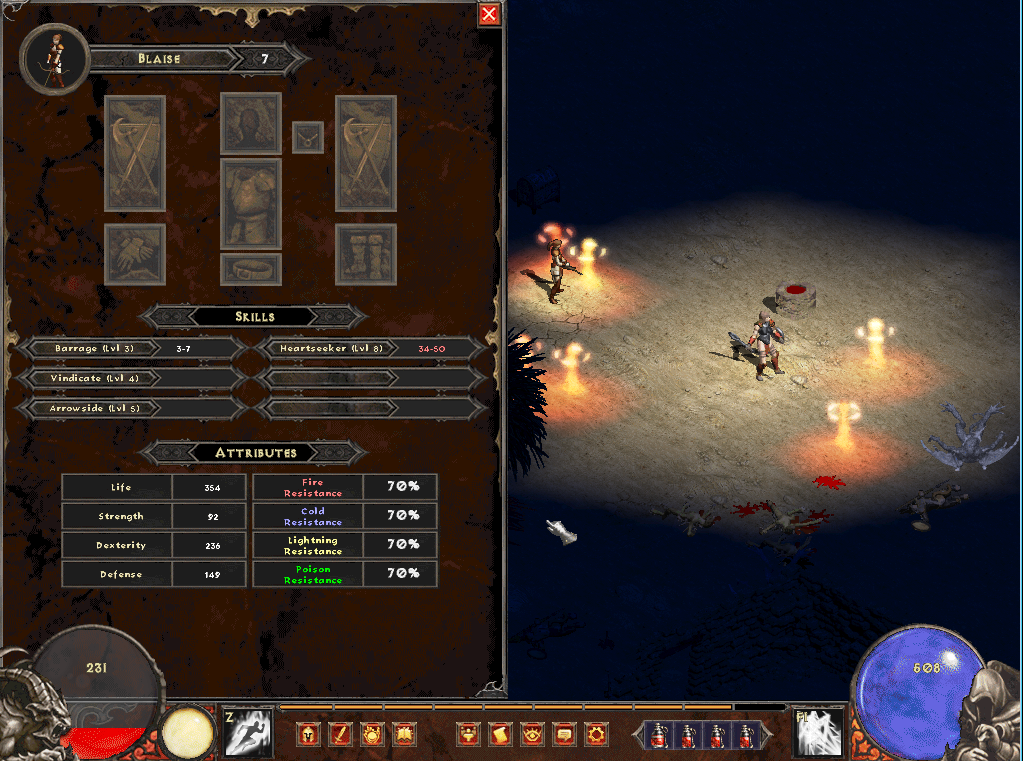 tranvanhieu
Grubber
300 | 0
0
At low level, Act 1 Priestesses are not using Vindicate, instead they are using Homing Nova Shot
#5
6 months

Razin
Destroyer
7 | 5
0
I have noticed some weird drop bias in Normal Act 2. An excessive amount of Great Mauls dropped. Basically every 10th enemy dropped one. I didn't notice any other item dropping this much.
#6
6 months

Hasteblitz
Fallen
1 | 0
0
Do not like the Bow druid Klunky build and not fun at all to play. Hurricane cannot scale dmg with any druid items being phys based...
#7
6 months

Donated 1 time
This is more of a general "suggestion" rather than 1.7 specific and thats morphs.

Im one who generally dislikes all morphs and even in other games too because generally morphs kill all customization/expression options.

I used to love trap and wolf druid but nowadays I just cant stand the morphs in D2 so would it be possible for example to have some vendor sell a charm of some sorts so that when you morph into traprat you dont turn into a rat and stay in your human druid form? There already have been some of these changes over the years where morphs have been removed. For example the short lived catlady for assassin, tittydragon for HMP and death knight for necro.

I get that morphs for druids are a very thematically sound concept, but theres very little to improve the models. I would love to quillstorm all day without any kind of morph or teleport around with a 2H sword as wolf. Unholy also has some weirdness going on where at lvl 90 I go from a heavy plate wearing paladin to some strage beast thing and the coolest model in the game for me is a paladin with a big ass shield and a crystal sword so thats just sad.

Im sure some people think morphs are cool and im also sure a lot of people would like to play these builds without morphs. Even WoW made a glyph that changed moonkin(fat owl) form to a blue see-through version of your "base" model so to speak and I loved that I wasn't forced to look silly.

So would it be feasible to give us an option to choose? Now my idea of a 1x1 charm might not be the best solution, maybe it would just involve an outside patch that replaces the morphs or a consumable, either way these morphs are keeping me from enjoyng some old favorites of mine and im sure there are many others.

Patreon Contributor
Sometimes the weird red Quill Storm animation and the quills themselves show up, other times they don't. Even when they don't enemies are still getting hit/killed. Not sure how to recreate this bug.
#9
6 months

Hasteblitz wrote:Do not like the Bow druid Klunky build and not fun at all to play. Hurricane cannot scale dmg with any druid items being phys based...

I agree, Bow Druid needs work. This thing where you cannot fire your "main" bow skill (e.g. Heartseeker, Cascade) more than once before you fire off the "Steady Shot" Level 1 bow skill yet AGAIN will make boss fights next to impossible with this build. If you ever miss firing off the "enabling" skill (or just get lagged for a half-second, causing the game to think that you "forgot" to do it) then you will just sit there impotently, not attacking at all, as if you were AFK. This spells "certain death" in Median, especially later in the game.

The "Steady Shot" spell itself, BTW, does a little damage over a very wide area, so at least in early game it is not totally useless. I found it works pretty well with the "Thammuz" xbow Runeword due to the proc Rune of Fire which does seem to go off a lot due to the Steady Shot multi-hit property. (Andariel dropped very fast, but that was because I was careful to count out one Steady Shot for each Heartseeker firing.)