I decided to give it a shot and test out new build, since I haven't played barb last season.

Not rushing like crazy, these are my stats at level 92 (start of a5 nm):
gear as you can see, lavadome dropped, so using that helm. Sockets filled with random runes as I don't have enough optimal ones, so runes like ELD for ar, some TALs and so on, few with resists. Screenshot with titan strike activated. Uniques are about half is still t3, other t4.
Character with stats like those absolutely facerolls content, nm diablo dead in few seconds. 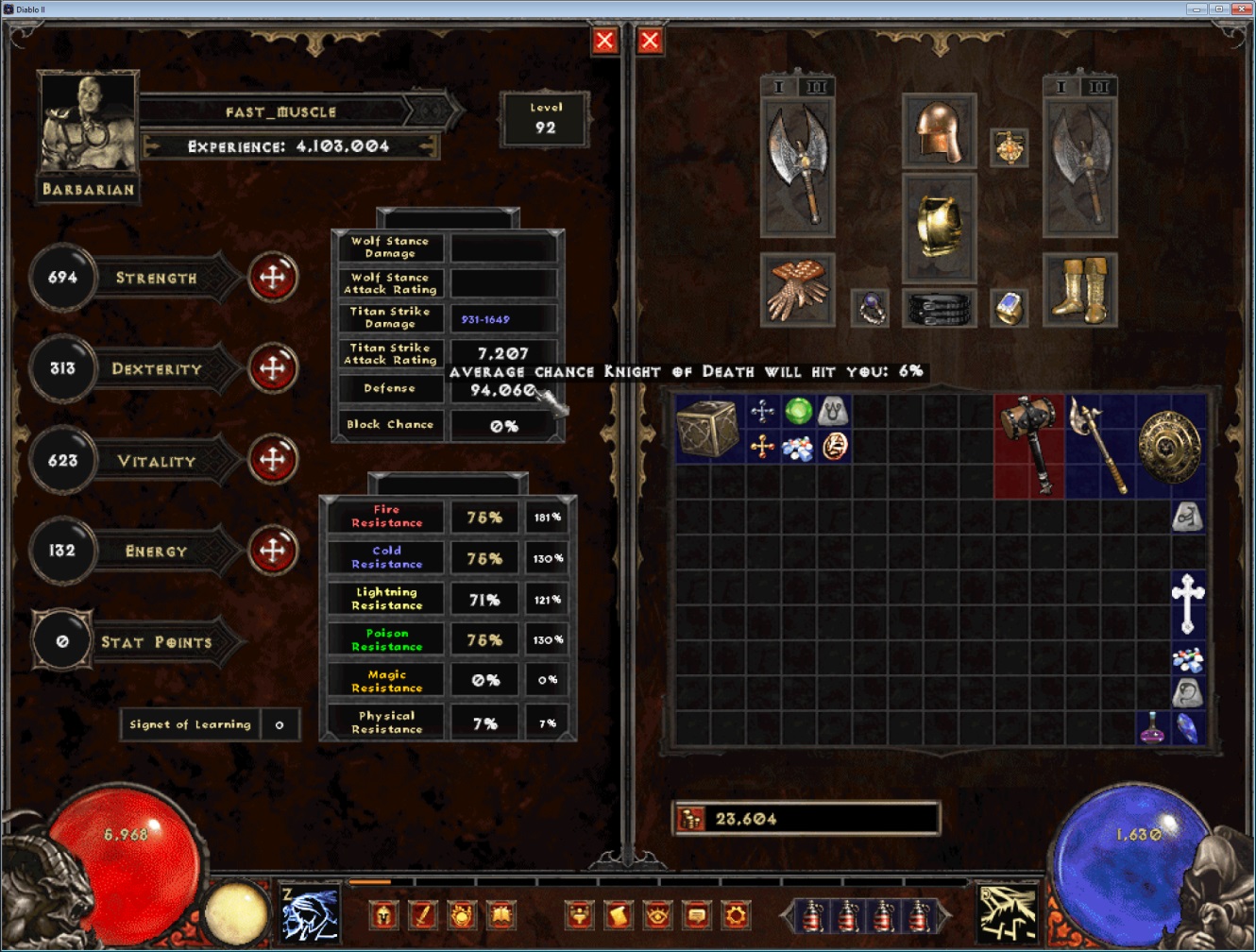 A Median XL guru... a true book of knowledge
Continuing my run. Stats after beating all up to 115 ubers:
gear: same as before except belt replaced with truce rw and chest nih, with bunch of AR jewels.
So far no problems, all done 1st attempt. Recording them as well with gear showcase before every single quest.
Some notes: 105 ubers such as iotss can be easily done with 200k def. It really transitions quite well, with bear stance you started way higher with defense, but you didn't really need it for those early quests that much. It gruadually goes up with more hard points into runemaster and spirit guide.
AR seems to be enough, it will skyrocket with +flat dex charms/items, such as crafts later. Not using any crafts yet. 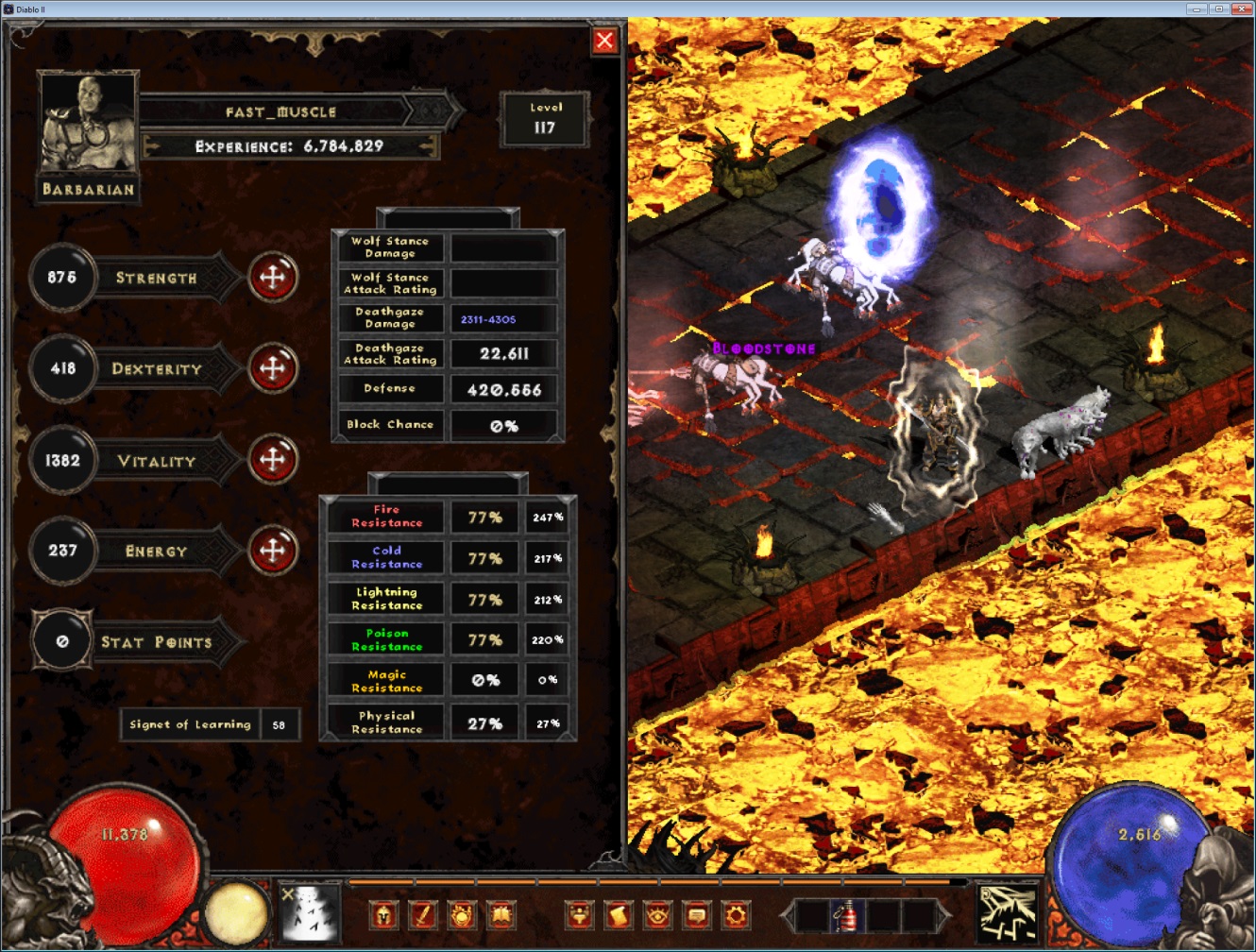 Haven't touched it since, just Jah'ed. Any Idea for MOs/Blessings? 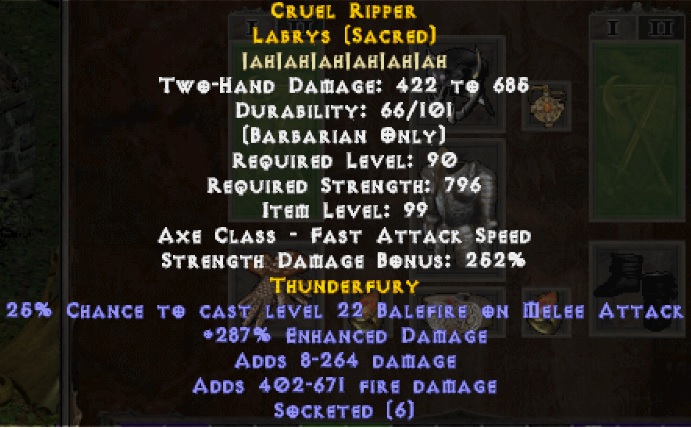 A Median XL guru... a true book of knowledge
Yea, pretty good. Blessing maybe with abandoned for extra AR.
Here is what I got before 120 ubers: 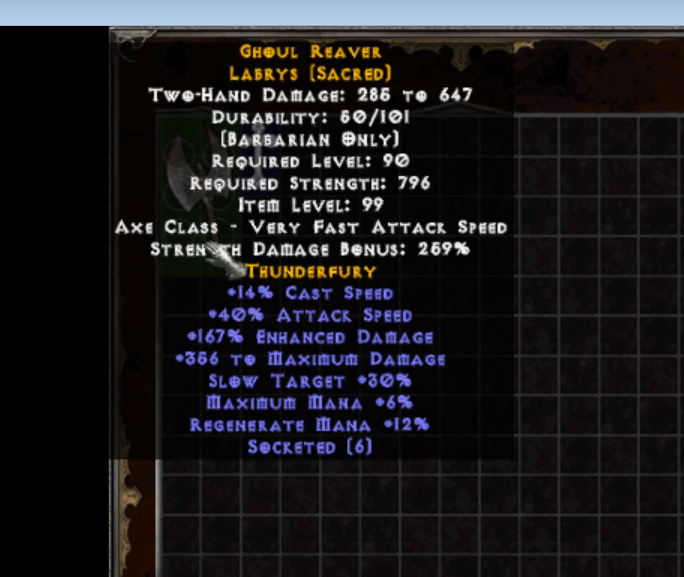 A Median XL guru... a true book of knowledge
Uploaded new ubers video for patch 1.2.
It is untwinked ssf run, ubers from 105 to 120. Timestamps are in video description. There are also updated links in the guide.

I show gear before or sometimes after doing quest, but every segment has stats/gear showcase.
Some ubers, where content is repetitive, to save time, I just demonstrate single boss, such as one priestess in TA, or one angel in Iotss.
Nothing is sped up.
As for build, I use respec once for last 120 boss: Kabraxis. We use exact same items, just respec for full fortress, as it makes it much easier, than trying to deal with this guy in melee. It is extremely aids fight if you can't burst him very quickly, and we can't do that without stacking tons of pierce, and overall better gear. This is why I feel like respec at that point makes sense.
Another thing is, at this stage we can slightly adjust build, since, after you get kabraxis charm, you can respec back to normal build, but, we can put less points in str, and more in vit at this point, since we have so much more str from charms (I ended up having 175 hard points total in str and being fine with req, rest into vit = more hp). Another thing is, as our dps goes up, wolf companion becomes less and less relevant. At this point I recommend dropping it to 10 points (3 wolves to sustain spirit guide, not much worse than 5-6). And spare points we spread between daedalus, wolf stance, spirit guide and runemaster - everything that we intend to max. We can also put 3 more points into Ancient Blood (so it will be at hard level 4), and that gives us another cheap +1 max skill level. These are minor tweaks, but they make sense.
Gear progression was rather straightforward. I use stuff mentioned in the guide, replace gloves with crappy abandoned craft which beats featherclaw, fairly soon. Before that change unique belt with truce rw and chest with nih runeword asap. Later as I go replace chest with lighter etheral base to run faster.
Then I swap random unique rings with assur banes x2 at level 120, also craft labrys at level 120. Use all random shrines saved up (except abandoned and quiet which I save for armor pieces). Select best labrys craft and use it instead of TU (I had about 30 shrines, and crafted several axes with over +300 max damage so it really isn't hard if you are not aiming for great roll with skills and proc).
I did replace lionpaw boots with quiet craft towards the end, but it was rather minor upgrade.
I didn't pay attention to minmaxing upgrades, just went with it, as there was no issues with getting charms. Most runs was recorded in 1st try (jday took few because of annoying map with pathing issues).
Note that many ubers were done fairly soon without farming, so it might look slow (TA for example). But going back there couple of levels later, can faceroll it completely, so keep that in mind.
#876
11 months

Donated 1 time
can u ues a Gotterdammerung as a weap? or the str to much for it
#877
11 months

A Median XL guru... a true book of knowledge
If you have this are you are rich and you don't need to play this build

Not but seriously, you could, just it has to be full strength variant of it, obviously.
For progression build we want to take advantage of ewd that comes from wolf strance, and fact that ed from strength got slighly nerfed. This is why going really low str, just to equip items, makes sense, before you get all charms and really good items, where lower hp will no longer be an issue.
#878
11 months

Inno86
Abomination
145 | 0
196
I am really thankful for the latest update and considerations about the build. This season (my 2nd) I decided to play melee barbarian and, even if it isn't a tier 1 right now, can still get the job done. But it isn't easy to play, melee builds are very hard to build, balance and then play .. so many factors to consider, especially without high-end gear.

aerial wrote:As for build, I use respec once for last 120 boss: Kabraxis. We use exact same items, just respec for full fortress, as it makes it much easier, than trying to deal with this guy in melee. It is extremely aids fight if you can't burst him very quickly, and we can't do that without stacking tons of pierce, and overall better gear. This is why I feel like respec at that point makes sense.

In your opinion, what would an appropriate pierce be? (in order to kill him quickly as melee) I think maybe
Yaggai's Sagaris

aerial wrote:Later as I go replace chest with lighter etheral base to run faster.

Do you think it is worth to use ethereal items as chest pieces? (provided we can find a 6-sockets ethereal chest out there) Or better to use a "normal" sacred ancient armor, rolled and luckied properly? What is the difference in speed by using an ethereal chest?

so, after doing all 120 bosses (and hopefully all 125) what is the way to go? try to stack elemental pierce? I think I will probably go for it.

A Median XL guru... a true book of knowledge
If you want melee kabraxis, youd need very good gear, pierce, yaggai axe is one way, but not sure if it would be best. But we are talking about very high levels of gear. Otherwise it is much easier to kill this guy as ranged, if not fortress, then overkill thrower. Imo it is easier to kill pretty much any other non-purify boss except samael, than kabraxis, so you get the idea. He has heavy anti-melee mechanics, and melee builds that can comfortably kill it play around it by being able to burst him really fast. It is not that hard if all you have to do is hit and run like 5-10x in a sequence to kill him. But if you need to do it for 10-15min, odds you gonna die multiple times are very high and that prolongs whole fight even more, making it unbearable.

As for run speed penalty. If you check base items in docs, you notice that body armors have penalty listed as one of their stat. Last 3 heaviest armor have it, and it slows you a bit. Some heavy shields also have that.
Ethereal chest is always better because of more defense, and fact you can now MO etheral items, there is no real disadvantage. You just need 1 jewel to be indestructible. Technically best would be eth ancient armor, because thatd be just way more defense than best normal one. But lower base type armor, that is eth, has about same defense as non eth ancient armor, so you don't lose any defense by using that, while gaining movement speed. That penalty is definitely noticeable. I think it works as global velocity penalty, so even if you have shiload of speed from wolf stance, it still will slow you by certain % of your total speed and you gonna feel it.
You can obtain 6 socket eth chest by either finding one, or finding one with zero sockets and using larzuk quest that turns it into 6 socket.


As for endgame version, I wouldn't worry about it much, since this build imo can't be really very fast and comfortable farmer. You dont wanna chase packs of enemies with medium aoe melee skills, click them to death, and invest a lot in items to do so, its gonna be mediocre at best. Thats why I prefere to focus on ssf approach and just beating the game.
Current build after getting 120 charms, can even run teganze at decent speed, just need move a lot. Duncraig is very comfortable. But again it doesn't compare to speed of certain clearspeed builds, you can't match teleporting nova build that clears in screens per second, never gonna achieve that no matter what gear you throw at it. 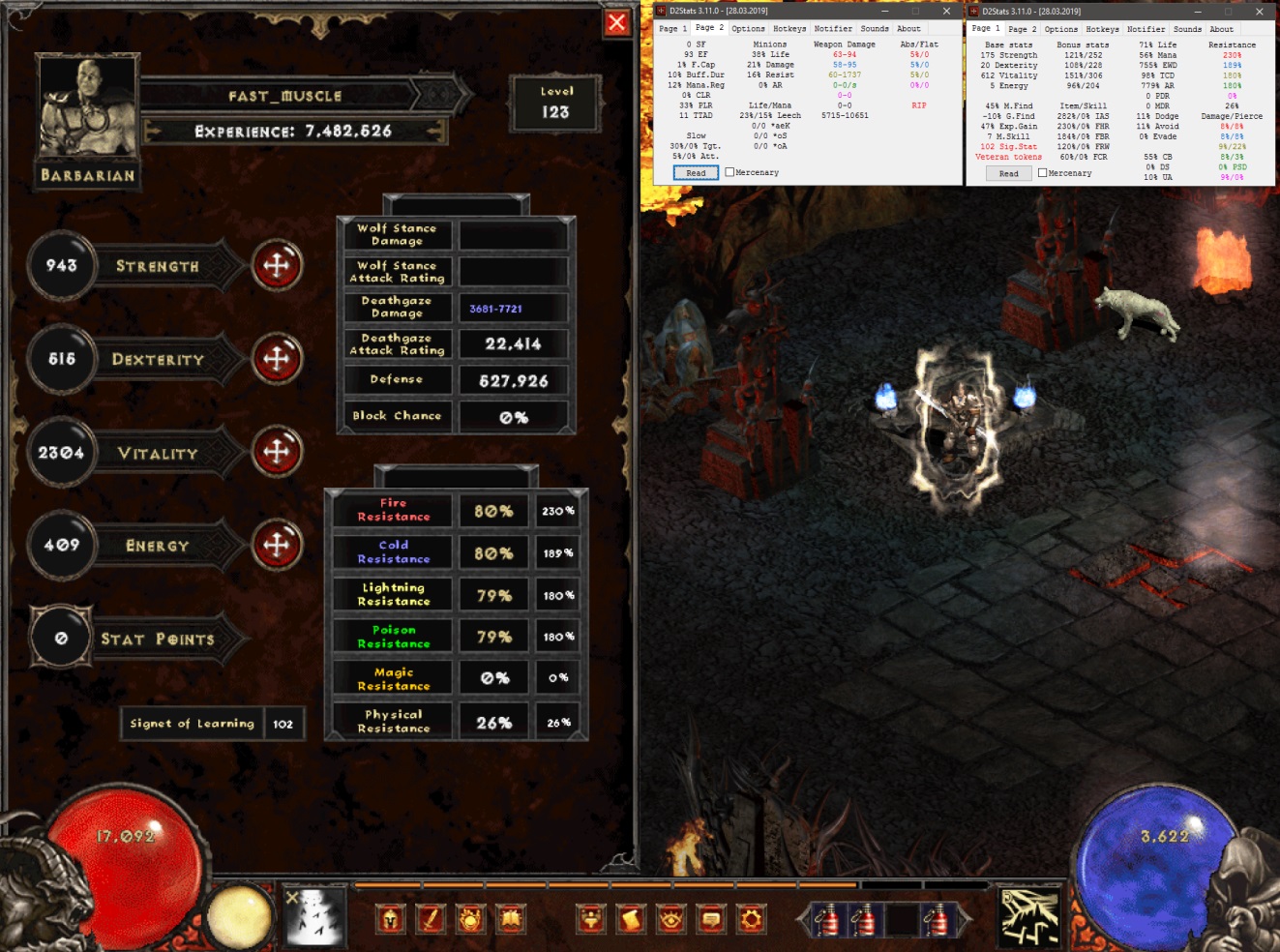