If you want to optimize/min-max your (caster)-build or to gear your A3 merc properly, it would be really nice to know how the total damage output of a certain spell is calculated.
This may be common knowledge to experienced players but I think this can help new players.

What kind of Spells are out there?

Of course most of the Spells, if not all, get better with base points and soft points put into the skill.

What is the big Formula?


I really appreciate the presence of the skill calculator but unfortunately it is outdated.
I assumed, that the overall mechanic did not change and played around with numbers on many skills and came up with following result:

TD: Total Damage of Spell per cast/projectile/missile/arbitrary time-unit
BD: Base Damage that depends on skill level and char lvl (only devs and smarter people know those numbers and its progression)
SD: The Spell Damage Bonus of the corresponding type (fire, cold, light, ...) in %
Synergie: The Sum of all Synergies to the Spell in % (see List of Synergies section)

The only skills that applies an third overall multiplier are Solstice & Equinox, Life & Death and Nightwalker.

What does affect the SD and Synergy ?

Since wordings regarding Spell damage in skill descriptions are not consistent, a simple rule:

Test it! You never know whether it adds to the SD percentage, the Synergy percentage or even applies an overall multiplier

Other things:
Of course there are other things that actually increase the DPS like less frames per cast, more missiles of spell, pierce (in case of elemental spells) and more, but they do not change the displayed number.
Increased Poison skill duration certainly increases the total damage output but not per second.

Besides the modifier xx % to yy Spell Damage there are quite some buffs/auras/passives that affect the SD percentage.

Druid:
Innate Skill Mark of the Wild: Increases Elemental Spell Damages by 10%. This Value can be changed by equipping items with xx % Elemental Damage to Mark of the Wild
Aura from Acid Fiends: Aura of the Acid Fiends increases Elemental Spell Damage depending on skill lvl with diminishing returns.
Symbiosys/Mythal: Full skilled Symbiosys will add 5% Ligthning and Cold Spell Damage per Mythal Base level.
Vine Companion: Aura that Increases fsd by 3% per Base Point in RoF/Elemental and 3% psd per Base point in Poison Flash/Plague Avatar

Necromancer:
Death Pact adds (1.5*MBP + MPB*DPB/20) where MBP and DPB are the basepoints in Malice Tree and Death Pact.

Paladin:
Superbeast adds xx% to Spell Damage depending on skill level with diminishing returns
Solar Flare adds 5% to Fire, Cold and phys/mag Spell Damage per Incarnation base level but locks out all non Dragon Tree Spells.

Sorceress:
Firedance: Buffing Ring of Fire that increases Spell Damage by 20% on first +1.5 % per every additional skill level.
Ice Elementals: Aura grants Cold Spell damage based of %Mionion damage with 25% efficiency (cap at 100%)

O-Skills
The O-skill versions of the Innate Buffing skills often scale with skill level and may differ in the Damage types they buff.
Of course there are a lot of other O-skills that buff Spell Damage

Burning Veil (Proc only):
slvl of Proc does not seem to alter duration or magnitude of the Buff.
proc: affix on Gloves,
Bloodbond

Bonus: xx % to Elemental Spell Damage depending on charlv


I am aware of the fact that SD is much more present than the synergy bonus. So I try to compile a list with all Synergies to spell damages.

Take a look at the skill description of your spell. At the bottom you might find a line stat: xx % Increased Damage where stat can be one or two of (ene,str,dex).
Examples for not(only) ene:
► Show Spoiler
Twin Fang Strike: dex + ene
Pestilence: str + dex
Poison Flash: str
Wildfire: str
... tbc

Note that the displayed number always is the sum of the Stat Synergy and the Factor Synergy what may be confusing.

When using UHM skills Lemures/Bloodthorns simply replace stat, ene, and str with vit in above Formulas

Getting EF:
Most common ways are MOs on weaopns ( 8 EF for 4 req lvls) and jewels that can spawn with up to 15 EF.
EF can spawn as an affix on many other items
EF is a modifier of Eerie Shrines
EF can be found as an modifier on many Sacred Uniques
Some Charms (
Hammer of the Taan Judges

Hammer of the Taan Judges
Required Level: 115
Keep in Inventory to Gain Bonus
+(21 to 25) Spell Focus
+1 to All Skills
+1 to Necromancer Skill Levels
Enhanced Weapon Damage +0.1875% (Based on Character Level)
,
Silver Seal of Ureh

Moon of the Spider
Required Level: 110
Keep in Inventory to Gain Bonus
+(21 to 25) Spell Focus
+1 to Jitan's Gate
Maximum Skill Level Increased by 1
Half Freeze Duration
,
The Sleep

Getting SF:
SF is much rarer and can be found on some Sacred Uniques,
Uldyssian's Spirit


.
Barb (Shamanic Trance) and Druid (Force of Nature) however have access to this modifier due to a skill.

Apart from Synergy skills and orange modifiers spells can have a maximum Spell Synergy percentage of 459%.

Amazon:
The Bachanallia skill of the blood tree. It adds 6% to the synergy bonus to Blood skills per base level if below 2/3 of max life or when Blood Fury is active.

► Show Spoiler
smax Bacha and with less than 1000 Energy you will have a total Synergy Bonus of 390 % without even looking at Factor Synergies. As long as your corresponding Spell Damage is much lower than that, you should increase it before bothering with EF and such

Necromancer:
Nightwalker in Malice tree adds 4% to a separate multiplier for Malice Spells per base lvl. So at base lvl 25 you will deal twice the damage, than without points in Nightwalker.

Sorceress:
Vengeful Power in Poison Tree adds 2% to Synergy Bonus per level for 5 seconds after being hit
Uber Skill Witch Blood adds 4% Synergy Bonus to sorc spells per level if your HP is above 80%.

Nice theory, but what shall I do?

I will only give an advice in terms of balancing Synergy and Spell Damage. I assume that in this process the skill level,the pierce (in case of elemental spells) and the achieved speed breakpoints will not suffer.
There is a simple rule:
If possible, keep both multipliers on the same level

speaking in numbers:
SD=Synergy=400 is better than SD=500 and Synergy=300. It is total factor of 25 against total factor of 24 so a real TD increase of 4.16%. So it can be good to sacrifice some SD to increase Synergy.
Or to rephrase it: when you have the choice of either increasing SD or Synergy by the same amount, always increase the lower stat of both

There are many new items in Sigma with modifiers that cannot be obtained by 'regular' gear. If they are kind of unique they are written in Orange. The following list tries to give an overview over Modifiers that affect Spell Damages.

All mercs have the ability Heroic Strength, that grants 1/6 EF per Str. The A3 Mercs additionally get an Energy and EF Boost
E=200+20 per level
EF=250+5 per level
This way they have a relatively high Synergy Bonus already without equipping any item.
The following graph shows progression of Synergy Percentage with the level (assuming str progression is equal on all A3 mercs) 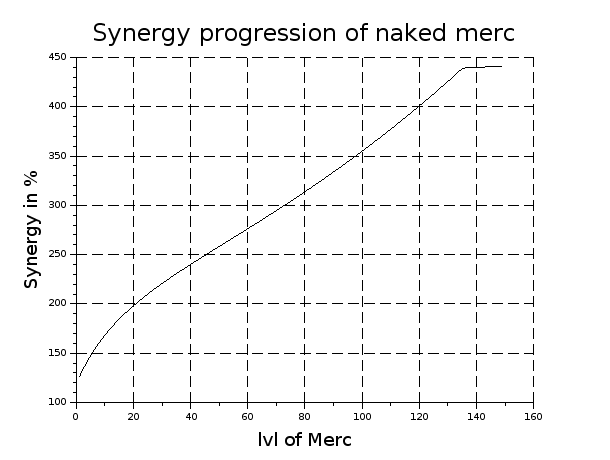 To maximize damage output it is again better to balance Synergy and Spell Damage. On a naked lvl 120 merc his Synergy is at 400% already.
So adding SD is much better until some point when socketing a P Topaz gives more TD.

+xx to Hailstorm on amulets does not affect Necrolytes Hailstorm skill level. (Reported in Feedback Thread, thanks to SingleInfinity )

The gearing of the Abjurer is quite different to the other two because of his ability to cast Superbeast. The minimum fpc is 5 (@194fcr) in Superbeast morph and it adds Spell Damage.
So besides fcr, pierce and all skills increased buff duration is much more important than Lightning Spell Damage.


thanks to:
suchbalance for the skill calculator
the whole mxl dev team for this mod
the people who made the wiki that unfortunately is out of date at some points (but someday will be great)

13
Edited by mortimer_85 4 months.
Ethario
Stygian Watcher
41 | 0
0
Thanks alot for this. You blew my mind talking about the Abjurer merc having buff duration instead of just spell damage.
#2
1 year

Ethario wrote:Thanks alot for this. You blew my mind talking about the Abjurer merc having buff duration instead of just spell damage.

I have to test it in Sigma whether Buff Duration still affect the Superbeast morph of the Abjurer. In the last version it was the case, but idk what they changed for the merc mechanics

tranvanhieu
Monkey King
294 | 0
0
I am wondering: are there any other equipments with + to Y to X skills that benefit Mers (I only know +Hailstorm (rare amulet) for Necrolyte and +Ancient Hand (weapon runeword) for Barb mers)
#4
1 year

Created a complete character guide
Glad that you like it. Really appreciate it.
As soon as BBCode for new items work I will ad more (useful) stuff. I am open to suggestions/critics whatever.

vpk79
Prowler
16 | 0
0
I wonder if my merc have an item with bonus - %monster elemental resist, whether these bonuses are added to mine or they not?
#7
1 year

Created a complete character guide
-enemy resist is calculated separately, for you and your merc. The only stacking modifier that comes to my mind is Magic Find.
You need a good farming caster merc ? -> get his -enemy res to 120 to 135 of his main element. (After some testing I will add some item suggestions in Merc section)
#8
1 year

Soulfighter
Destroyer
7 | 1
0
This the most amazing thread I've found on the forums, it's so detailed I absolutely love it. I started playing median a couple of weeks ago and I was a bit sad at the lack of specific, precise infos like that. Thanks a bunch man!
#10
1 year