Stats are gear minimum with everything else in vit

Max serpent/top 2 middle skills in nomad
1 in ww, max rest and ignore top right for deadly strike
Mastery is 1 Melee, 5 phys res or 4 to psn and curse length 10 for + 5 cap to snake stance

Make a set of gear with just +skill levels, no other stats matter.

So between jewels/gems you get max res, min res for rifts 8/9/10 hit frame cap for ww and hit recovery, have a movespeed over 110% and psn range does 850-1.1m base over 5.5 seconds with 171+ pierce before jewels/runes (before duration penalty in rifts apply) so all trash dies from 1 application. It's much faster clearing rifts, less risky, and less gear intensive Than runemaster. Burning veil on gloves will double your base dmg if you get the craft. If you can't afford/find uniques and sets then a full set of shimmering craft (psn shrines) with dex/attack rating blessing(abandoned) works as good. If you don't need the attack rating (have at least 60-100k for Whirlwind) then you can bless for defense/physical resistance.

Mos - 30 loh to weapons, 2% psn to all. Can stack extra resists/str and Dex for gear/hit recovery attack speed if under cap. Just don't bother boosting armor because you're only going to have 60k-350k depending on whether you used wolf companion defense boost.

Just remember NOT to spam physical part of ww, just hit enemies and move on. They do not take damage after a certain max distance (like bosses taking no dmg from psn when their health bar drops from being too far) so don't start outpacing them until they hit 40% hp.

Rifts take 3-5 mins. Only laz encounters are an issue, same with deimoss until you learn the fight.

There's minor changes to 8+ and boss encounters. You can break astro set for more physical resistance against bosses if the 40% from chest/rings/skills/axe isn't enough. In that case conqueror set or dyers works for the remaining 10-20%, but it's not an issue. Mainland demhe if you have one over Blacktongue, and boost ewd/str extra stats when you hit 18-19k hp without Titans.

It's cheap, easy, quick, and the first page guide will take you through fauzt/scosglen/rifts 6 or 7 with that gear. But from 8 on, more weapon physical dmg/resistance makes up for the lack of defense from passing on runemaster.

You really won't see issues until rift 9/10 at 140+ with the listed gear using gladiators. And if you don't have any luck finding gear/upgrade success for phys res/decent corruption results on great- you can Offhand a shield in rift 9/10 (runeword for psn pierce, I think its name is triune?)

For relics
Time warp is a huge boost
Lorenado/harvest works nice with grotesque for bosses or Scales of drake for trash( lvl 80 spells hit for 350k base)
Wolf companion helps on bosses/single target dmg (2 base skill points in 2nd wolf skill for +phys dmg on target is 200-500 added base dmg)
Ww just boosts stats does not boost output
Titans just adds exp, does not boost the skill
I've used barrage/bladestorm/time warp so far this season for best results. Barrage for bosses, lorenado for trash.

Sorry it's long, but example of stats from screenshot ( without bloodlust/gift of wild/burning veil) shows just how over the top dmg output is and how little you need phys res until rift 8/9

This guy took about 10 hours from lvl 1 to get here, including all the time afk in chat playing on main. 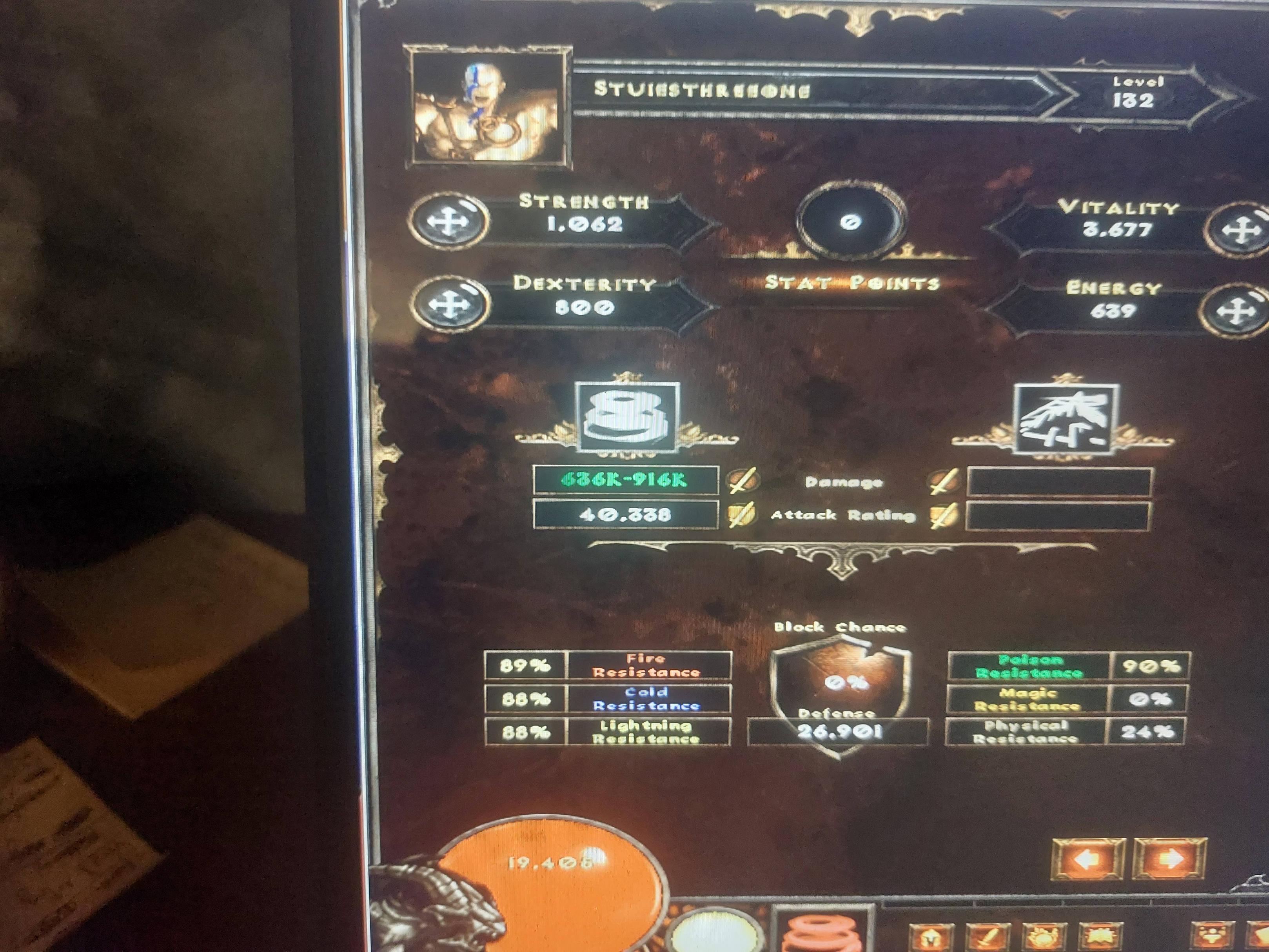 Sorry, long post that gives details on process of leveling a barb this season. Cost me 25tg total for everything I didn't want to farm. He's got a ton of room to improve, and is nowhere near as tanky as last season's barb. It's an easy class to play though, teaches mechanics, and requires minimal attention to be sufficient

*edit my jewels/gems are still garbage since it's from first craft results going for xp jewels, so this guy can still get another 115%+ psn dmg, remaining res cap, and stat caps from just fixing my sockets. But I don't even need to do that still
#212
4 months

It's gotta be the PR for high labs

Wouldn't you use Der Nebels for that instead? More phys res and massive hp. Anyway, just use Shadow Refuge relic to cap phys res and run poison rings or even better, Empyrean Glory/Ouroboros.
#215
4 months

Donated 1 time
Any suggestion on which merc to go with? And what gear should they have.
#216
3 months

Hyrianeth wrote:Any suggestion on which merc to go with? And what gear should they have.

there's going to be a merc rebalance soon. I might add a section for that if I can because it's a commonly asked question.
#217
3 months

Expanse
Stone Warrior
32 | 1
310
hey bud, little reminder to update your skill tree for labs/bosses and beyond.

Expanse wrote:hey bud, little reminder to update your skill tree for labs/bosses and beyond.

hows the boss killing?
i played physic eq barb with divine judgement.
pretty smooth in scos farming but i was desperate when i had a fight with scos boss
#219
2 months

Donated 5 times
Anyone tried the Deckard Cain set up?
How much more SD% do we get than regular set up?