A Median XL guru... a true book of knowledge
You need to bind it on right skill so you switch stance to fortress, cast and go back to stance.
#32
3 years

I mean, I guess you can see what is going on but yeah, it is quite "small"

Donated 1 time
holy shit, I had thought about switching to wolf to cast fortress and then back to bear but I didn't think about putting fortress on RMB, aerial you're a genius

I see a big sentiment of a lot of "vet" players saying oh no median xl is too easy now the game is for casuls boohoo. Maybe for a certain segment of the population this is true and I really am sorry the game isn't what you want anymore but its my opinion that this is still one of the harder and more punishing arpg games out there and the game I really do believe gets better every single patch. I personally know 10-15 people who couldn't get over the intial difficulty hurdle of the game that are now happy median xl converts. Each of us probably knows 10 people at least who would be at least interested in checking the game out think of how awesome it would be if you could convert all those people and give this mod the attention it deserves.

It is my personal opinion that the game actually is not too easy but rather getting to a more sensible state of balance for more than the absolute most sadomasochistic of players. 40 minutes of fighting a single heroic boss (Astro) or being very careful with your character movement and aim (Laz) is not too easy. Not to fanboy too hard at Suchbalance Marco Whist and all the work of the amazing team but this game is truly a gem and I for one am extremely grateful on the continued development of the game.

In closing my philosophy is just because you personally may not love a game as much as you used to doesnt mean that developer decisions are "wrong" or the game is bad in fact your experiences might cloud your judgement on how to more objectively evaluate the direction of a game I know this has personally happened to me with Path of Exile, Starcraft and a variety of other games.

I'd never be able to do this with T6 gear regardless. I can't even get all the charms with no restrictions. I'd guess that I am most players. So vets, revel in this because its just 1 class with 1 build who can probably do this, with an ace player controlling.
#36
3 years

A Median XL guru... a true book of knowledge
I was running around with t6 gear some more to see what can be farmed with it. And honestly it isn't that bad. Death gaze after seek range reduction (so it no longer travels to another screen instead of hitting targets in front of us), is pretty decent. You can clear fauztinville with some potions, duncraig dies relatively fast.

If you craft some random axe with max damage roll (proc isn't important), your damage goes up by quite a bit: 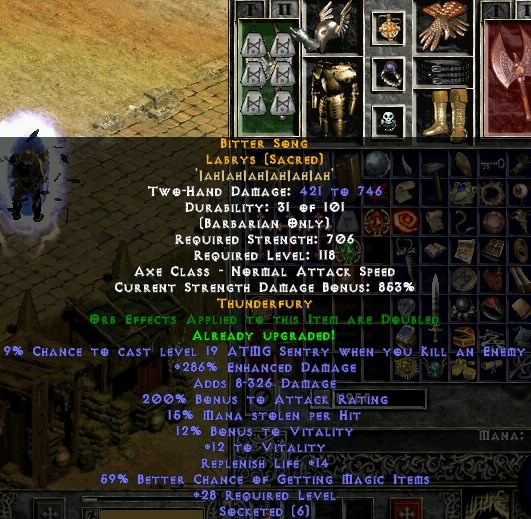 T6 does have 10cb and 20% slow which isn't bad, so comparing just raw damage isn't everything.

2h axe farming specs definitely kill faster than iron spiral, untill you get su setup and stack up that crushing blow. Then ability to constantly whil through crowd is really good, you gonna hate walking with axes.
But in the end, if I wanted to build a pure farming spec for barb, I'd aim for snake thrower with block, hard to beat ability to one-shot crowds with stampede. You also get max slow, max block (less defense though and less dr, need to get dr from gear).
Overall for long farming sessions you don't want build that has to left-click everything to kill, instead just drop big AoE once per screen that wipes everything, without having to aim specific monster.
2 seasons ago when I played my barb on realm, minmaxing that AH spec for heroics, snake thrower was the build I ended up using for farming, and merc barb, but that is now nerfed (elemental totem and abjurer nerfs).
#37
3 years

firerebel wrote:its just 1 class with 1 build who can probably do this, with an ace player controlling.

there are more builds/classes out there that can do the same .
#38
3 years

A Median XL guru... a true book of knowledge
Problem with other classes is you gonna have way harder time doing some things that are very easy for barb, such as: ureh and vizjun. Remember no sigs = no block on block classes. You would have to teleport with minions and spam TPs. Doable but painful.
#39
3 years

indeed , but the statement is still valid . there are more builds out there that can get all charms without respec , extra sigs and godlike gear
#40
3 years