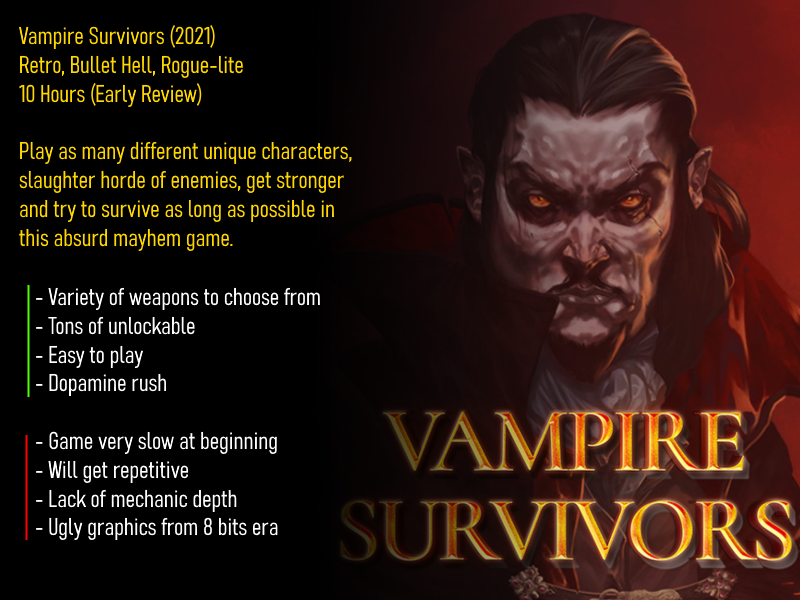 Lets be honest here, you probably heard about this game from various popular youtuber that suddenly blown in popularity earlier this year. I was skeptical at first, since people said it is just a boomer game, where gameplay is just to move around.

The game is what i could say middle ground between twin stick shooter and idle games. The key features are the absurd numbers of projectiles and enemies that would be thrown at you. Gameplay required you to get stronger by collecting experience crystal as well as the famous slot machine treasure chests. Failing to do that, you will be overwhelmed and probably die. Good thing about this game is it is short session with simple goal to survive 30 minutes (for current version). There are also tons of stuff to unlocked, from character, weapons, level & game mode.

However my journey with game is not smooth. Everytime you lose, you will be given gold to get permanent upgrade at start of new round. I stuggled long hours in beginning since i didnt focus on unlocking certain characters / weapons, this result you will unabled to certain key powerful upgrades in your runs. The game is pretty heavy on RNG, until you locked in 6 slots of weapons & 6 slots of gears. Despite my long playing hours, I dont think I considered I enjoyed the game, but i kept playing for some reason.

Personally, I wouldnt recommend this at current version. But if are you type of person who want easy & chill game with tons of dopamine rush, this is game for you. There is nothing new here, since we already accustomed to ARPG genre (unlike... casual).

Donated 1 time
Im a badass cyborg ninja, who can die in 1 hit 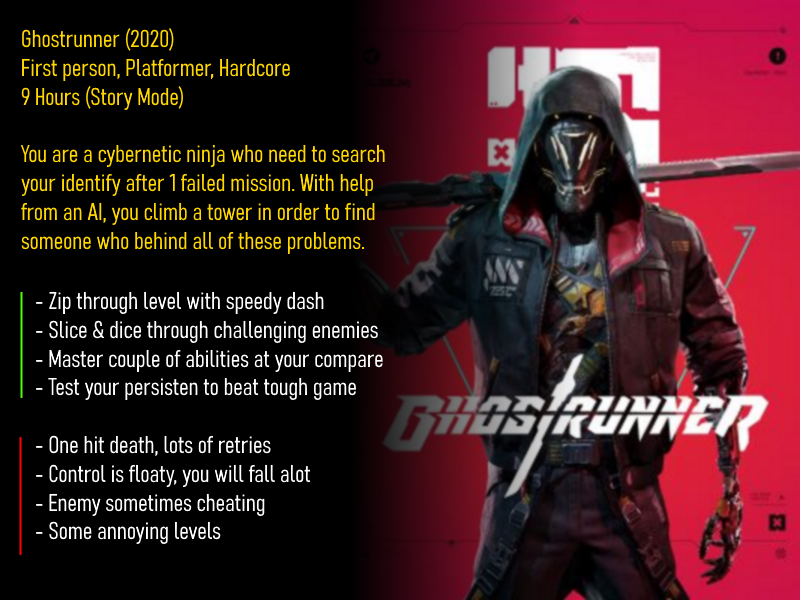 I will be honest, I was hyped when I saw the game for first time. Slick wall run parkour, ability to slice your enemies as well as nice futurstic aesthetic. There was many times I was thinking of buying it, until i got it from Humble.

The game started fast, it teach couple of basic mechanic quickly from jumping, climbing walls, wall running as well as how to kill basic enemy. Best basic ability you have is sensory boost, which you able to slowdown time to dodge incoming bullet. As you play more levels, you will unlock couple of new abilities, fight many new encounter as well as some of interesting boss fight. The game is pretty fast paced, although it highly depend on how skilled you are with this kind of game.

Here come my biggest issue with this game. This game is very frustrating with one hit death mechanic. You will die alot to random enemy bullet. You will fall alot and you will have repeate couple of sections multiple times. While it is not bad at all, the game forced to go through some of most annoying levels (digital world called cybervoid) where you learn some tutorial, solved some puzzled as well as platforming that god awful. Rather feeling fun or accomplished when playing this, i hate it all because of many weird design the game have.

If you have good anger management, then you probably can enjoy it. I didnt and I moved on to other games quickly despite I know I at least can get all collectibles. Im just salty after finishing the game.
#1152
3 weeks

Donated 1 time
Is this a some sort of masterpiece? 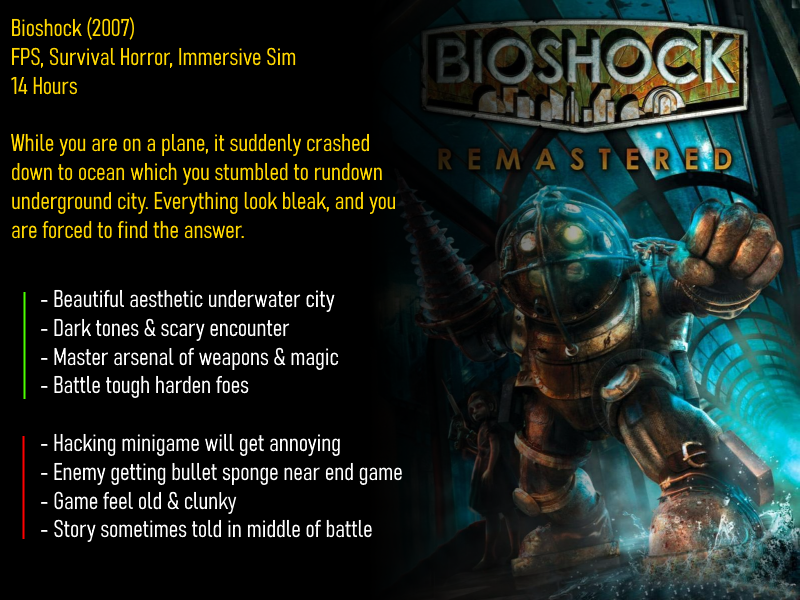 There was long story with this game. I played multiple times in the past, but couldnt get past several game breaking glitch that made I couldnt finish the game. I know this is old, but Im gonna review from my current perspective.

Best part of bioshock is definitely its aethestic & environment design, something about big city underwater made it mesmerizing and intriguing. The game also use several concept of immersive sim where you can switch between using power, weapons as well as ability to hack any machine in the game. The opponent is freaking touch, which have clever AI as well as they will hit you when you least expected. Aside from cutscenes, the game also rely a lot of story telling audio logs & radio contact.

However the game is far from perfect. I personally have issue enjoying it since i think the gameplay is a bit arcadey & enemy bullet spongey became too tedious (maybe because i played hard difficulty). While you have alot of arsenal, it is pretty tedious to switch around since you have magic, weapon as well ammunition types. To make matter worse, in order for you to get better damage, you need to take photos WITH A FREAKING CAMERA in middle of battle. As the combat can get intensified, i rarely able to pay attention to any dialogue in the game.

If you can overlook the flaw, maybe you can find enjoyment in the game. I think the game do have some merits to be replayed or 100%, but i just get bored and will move to other games. Maybe i shouldve played easiest difficulty & take time to enjoy my surrounding.
#1153
2 weeks 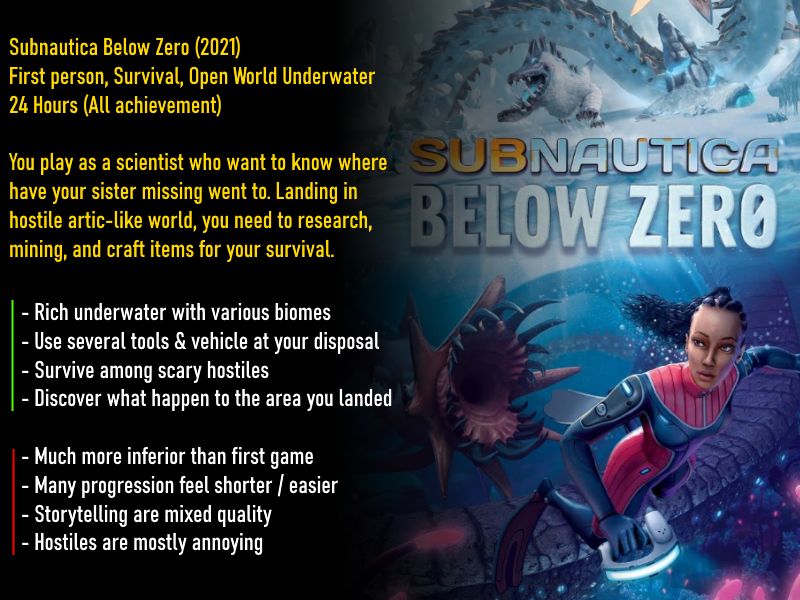 Have been waiting for the game for awhile, and now it finally reach 50% off on steam, and i need filler game while waiting for PoE league to launch, i thought i gave this game a try.

Pretty hard to play this game without comparing it to first game. The game introduce many of new mechanics that is interesting and immersive in this underwater adventure. The game now introduce several biomes above sea level, all covered in snows and occasionally, harsh blizzard. While you searching your sister, you will be encounter another person on the planet which pretty much you tell what happened to the area. There are also several remnants of alien tech that you need figure out what are their purposes.

The biggest problem with the game is that is feel like a DLC or an expansion for the first game. The biomes diversity, the upgrades, the progression of your tech, the exploration, enemy types all feel smaller & inferior than first game. Despite there are cutscenes & dialogue by main protagonist, some of them are feel like doesnt add up to whole story. The new vehicle that added to this game while I understand it have it usefulness, it feel like more clunky and hard to use than vehicles in the first game.

If you have played the first game, you can play this but set your expectation way way lower. I personally tried to play the game blind, until the game suddenly stop give me instructions on where to go after couple of hours.
#1156
1 week

I don't like this league's mechanics. Problem with GGG lately with league gimmicks is that for every step forward walked in the right direction, they immediately walk 3 steps back. Also archnemesis mods on normal rares can be very unforgiving. Rhoas casting ice prison on mud flats? Permafrost mod on burrowers? It's so overtuned it gets nearly unplayable. On CAMPAIGN. Is this Hell Unleashed PoE version? Where is the normal zombie mob that you have to get a raid going just to kill it?