Earned over 100 cookies
PoE needs to go back to the drawing board on what makes leagues fun and engaging. Lately they've been pulling out leagues that are clearly just benchmarks and tests for PoE 2 content, whenever that comes out. I skipped Sentinel altogether because my idea of fun isnt "get thing(s) , click a button to make things turn monsters more powerful and give them affixes but you better pop quicksilvers because you ONLY HAVE A FEW SECONDS per tile lol" ; i have to give them props for creating extra passive trees for some of these leagues, like the Sentinel passive tree, but that wasnt enough to keep me and tons of other people playing it. GGG is losing their edge and only fanboys and people without eyes will say otherwise. Hopefully next league will be a vast improvement to this one, because at this rate if this keeps up im not gonna touch PoE for another 3 months.
#1161
3 weeks

Donated 1 time
Is this the answer to single player is dead? 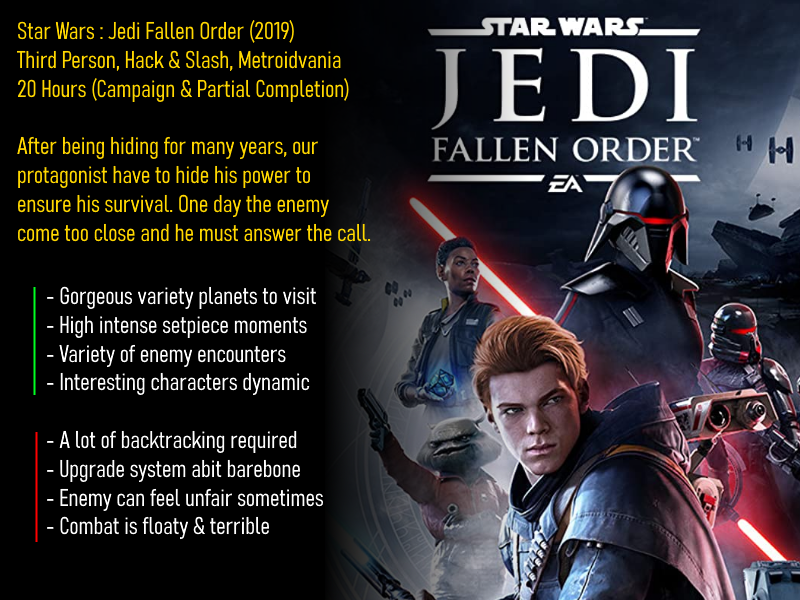 There is many stories related to this game, especially if you know about video game industry during pre-2020 era. While many games went with heavy micro transactions and multiplayer game, this game stand stall as one of the best selling single player games... or is it?

I grabbed this game during one of the amazon prime promo and I played 1st mission that give pretty high expectation with its set piece & pacing. The gameplay is akin to combination of 3rd person hack & slash with metroidvania. You will be able to unlock new abilities & skills, which is required to traverse to new location. There are alot of enemy types, from the normal grunt, various hostile creatures to big talling mech. The boss fight also quite interesting & challenging, encouraging to you to play around with your abilities.

My biggest issue with this game is the combat. Something about the game not exactly methodical & inability to fight multiple enemies at same times. I started with hardest difficulty at first, but just gave up & play normal difficulty instead. Enemy will stun locked you to death unless you willing play the coward way by kiting enemy one by one. You will be locked into various slow animation, and wondering why your input is being ignored. Not to mention, all ability you can learn is pretty basic & collectibles is super boring cosmetic.

I finished the games, and on the fence either i want to 100% acheivement this, thankfully characters & story carried the game or else i would be salty as fk. If you planned to play this game, set your expectation low. It is not the greatest, it just polished overall product... except for combat.
#1162
2 weeks

Earned over 100 cookies
Weekend so i figured id take Dying Light 2 for a spin since i never actually tried it. Big regret. Game looks fine though it looks dated but ill look past graphics on this one even if it does have the RTX splash screen when you boot it..............sigh. The combat is a huge downgrade from DL1. You are cucked with base nothings until much much much MUUUUUUUUUUUUUUCH later on after you grind enough xp on parkour and combat. Also the zombies have this move where they lunge at you where you are stuck on a QTE event to set yourself free from then, on which you will lose health regardless, and you cant block the lunge, forcing you to dodge out of their way but more often than not the dodge does nothing since they seem to home in on your position anyway, and they can do this from a considerable distance too. Its very jank. Its all just very jank.
#1165
6 days

Earned over 100 cookies
Spellbook demonslayers - free demo at the moment. You run in circles around the map and spread projectiles while killing loads of incoming mobs. The fun part is customization/picking your skills and passives, you choice on each level up plus some side bonuses when boss type of mob is killed. This bring rng part and replay value. And soundtrach is nice too.
Looking forward for full game.
#1166
6 days

Earned over 100 cookies
100%'d The Mortuary Assistant last night. This so far is my indie game of the year. Horror done right with quite a lot of replayability.
#1167
4 days