Any tips for the build ? How is it for mapping in general, safe solo, single target/crowd control ?
#921
3 weeks

Donated 1 time
General tips:
1. If you want a build, always search for league starter
2. Transition to boss killer if possible
3. But I think AOE mapping is more important, enough to tackle majority of endgame content (usually boss is hardest)
4. Then just farm farm farm, either ssf or trade league.
5. Lastly probably endgame crafting, but it was too expensive (harvest got nerfed too)

My struggle last league is lacked of large AOE map clear (holy flame totem) and because of certain self made decision (not follow a build guide exactly), it was chores for me until I finally got my freezing pulse totem setup ready.

tl;dr dont make mistake like me unless you willing to spend 100 hours only barely reaching red map.
#922
3 weeks

Anonymous: wrote:I might actually try that trickster in this new league since all i have done for every league is to start as duelist

Any tips for the build ? How is it for mapping in general, safe solo, single target/crowd control ?

Incredible clear speed, really decent boss killer with maybe one Bane (not required just a bit more dps) and Vaal Blight up for that Wither debuff (applies Hindering = slower move speed + increased chaos damage taken per stack of Wither applied) , very safe early game (and mid-end later with smoke mines and phasing). ED shoots a projectile that doesnt do much on its own but then you cast Contagion on the target with essence drain and it spreads to every mobs next to it. It's like a very early explodey chest but on Chaos damage. Everything around the ED'd mob gets melted when you cast Contagion over it.

Because it's Trickster, you’re already innately fairly tanky through Ghost Shrouds and Energy Shield recovery every 2 seconds, for as long as you’re actually taking damage. Since Trickster also scales very well with dots it's pretty much gg everything melts. You're naturally going to stack Evasion stack on Trickster, so it's an "avoid as much damage as possible" build and stack just about enough health pool to survive the content you’re tackling to never get one-shot. What's also nice is Essence Drain doesn’t require any unique items and has a decent amount of slack for you to to stack health passives in the skill tree, so you dont really have to focus too much on stacking all that damage (which you shouldn't because then you'd be too glass canon even with stacked evasion)

Since you also automatically recover your Energy Shield you should stay topped up throughout most of your playthrough. Just don't try to tank the obvious telegraphed one-shot mechanics, that won't work.

I'm so tired of league starting this build, so i think i'll go Toxic Rain Raider instead, despite the HUGE Toxic Rain nerfs with how far the pods land which will make it harder to consistingly get good numbers on AoE overlap...but should be ok.
#923
3 weeks

Never since Disco Elysium have i played an indie game that sucked me in as much as Loop Hero. It's really addictive once you start understanding the mechanics.
#924
3 weeks

Farming ES gear to go CI later on this guy is not gonna be fun. 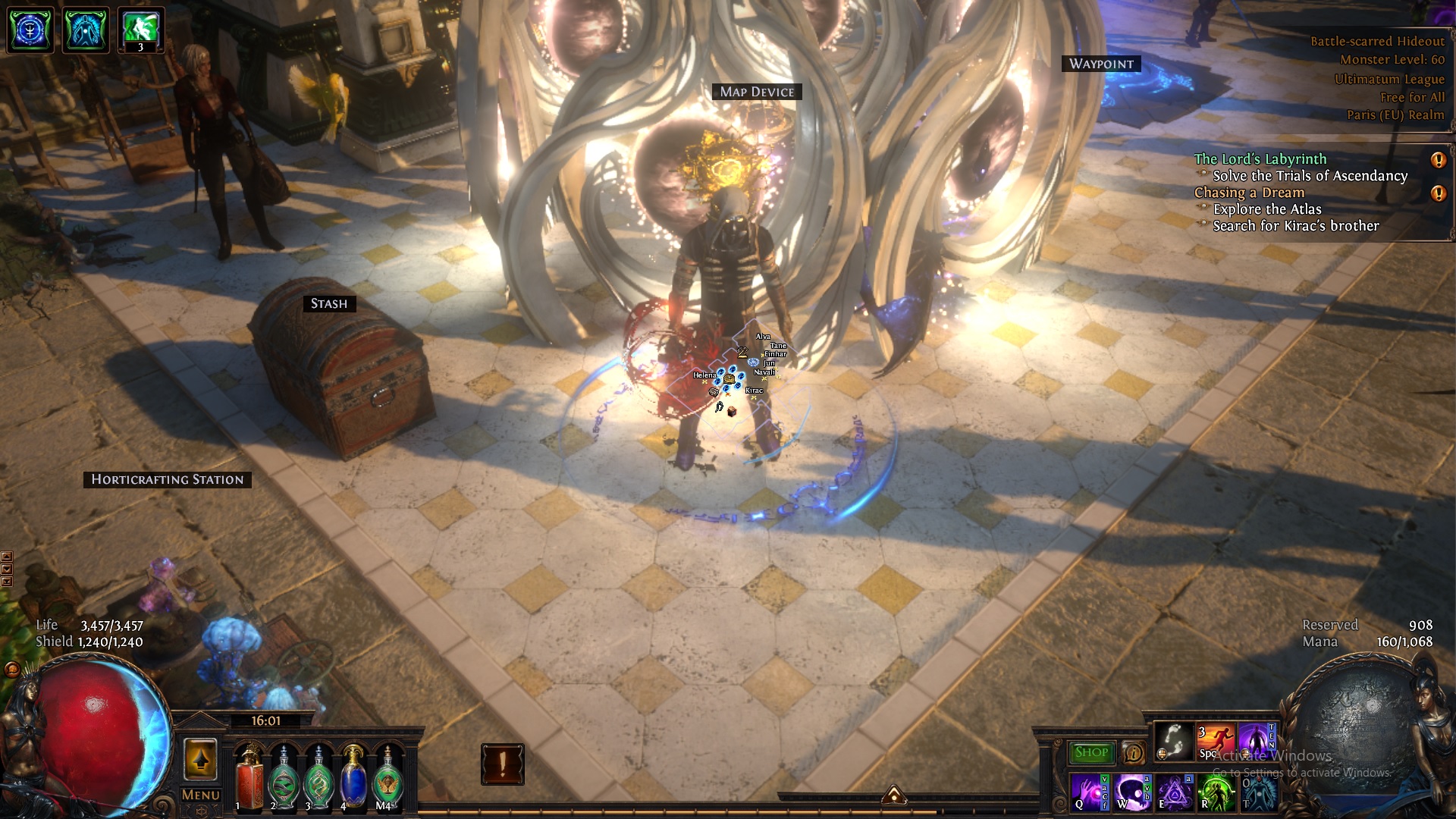 not even a week into the league and Shav's Wrappings drop. oof. noice. 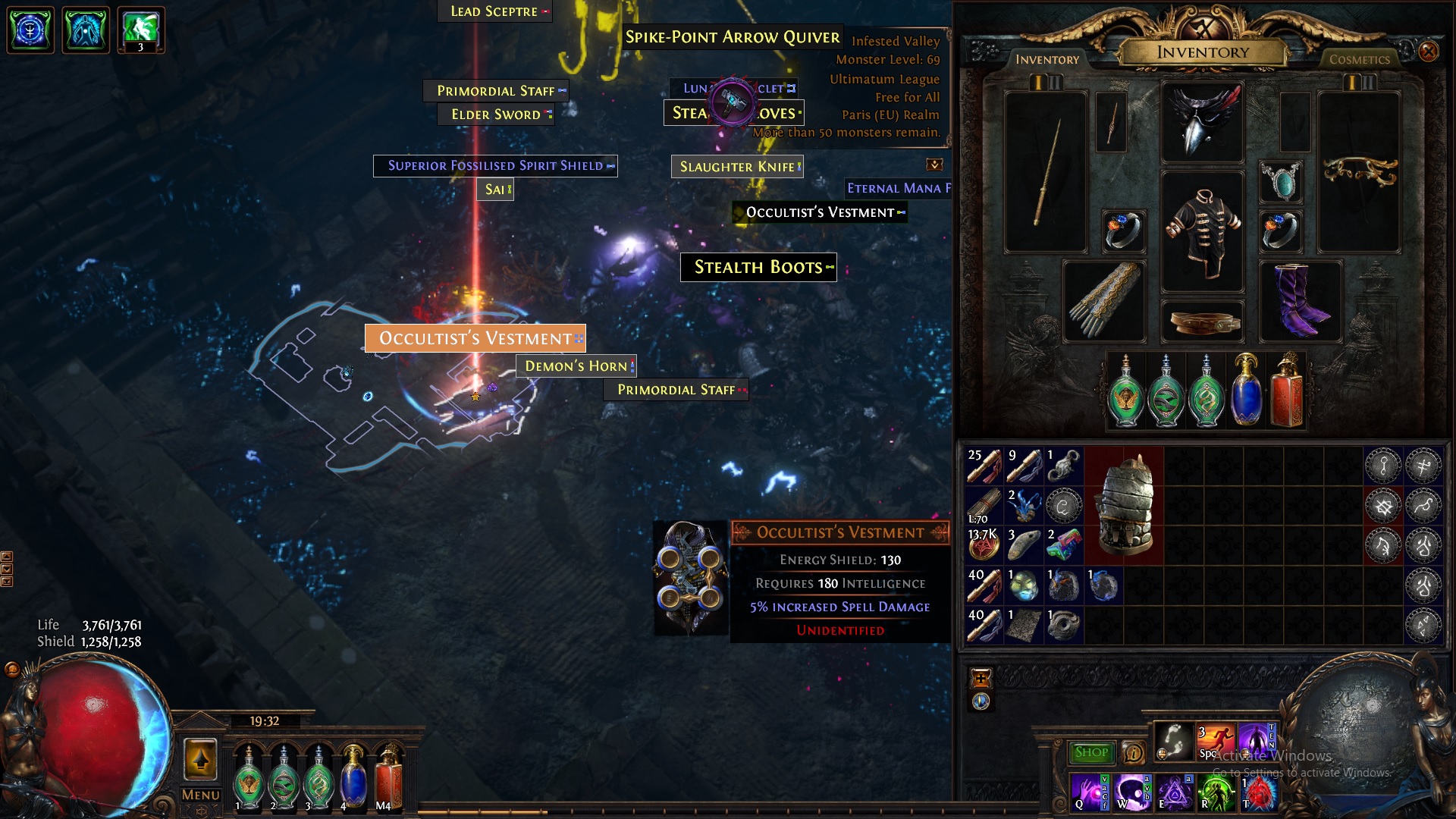 Earned over 100 cookies
Thanks for this ED/contagion/bane build suggestion. So much fun and fresh feeling. Now running through acts and trying to resists every ultimatum challenge on the way. One of them gave me a unique golem jewel which i sold for 30 chaos emediatly

now will buy some starting gears and kick ass. 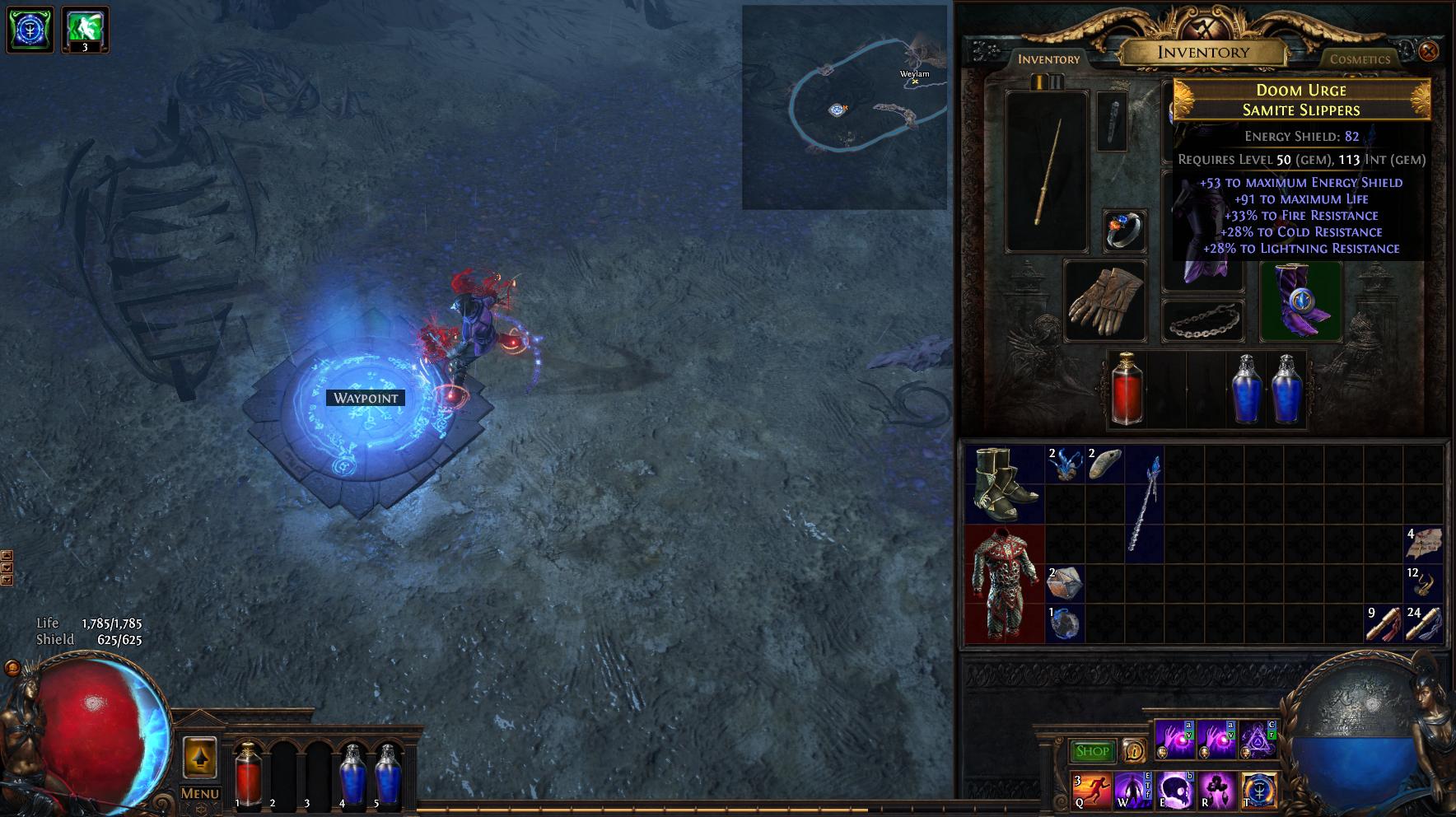 Earned over 100 cookies
Dont think i ever had so many Chaos Orbs in week 1 before. Ultimatum currency drops are ggggggggggggg. 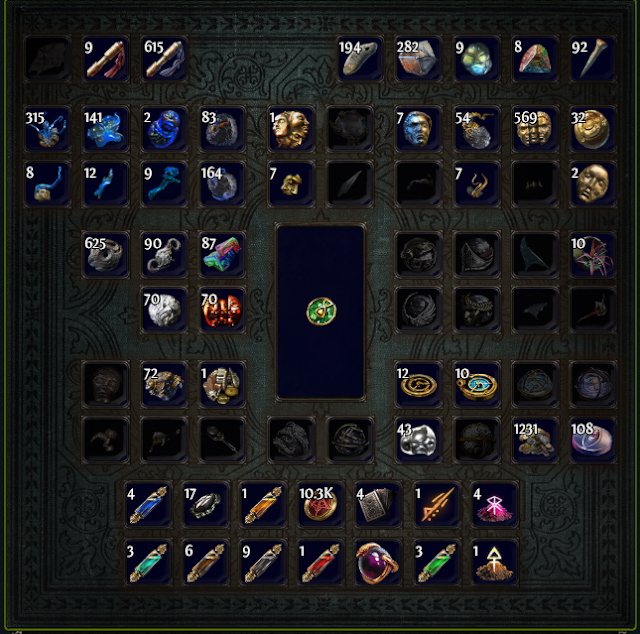 Earned over 100 cookies
Haha, and i though i was doing ok

btw thanks for tips and help. Now i am full ED and see the potential in blight maps, breaches, ect. Very cool corona style char - spread desease around the corner and watch the world explode. 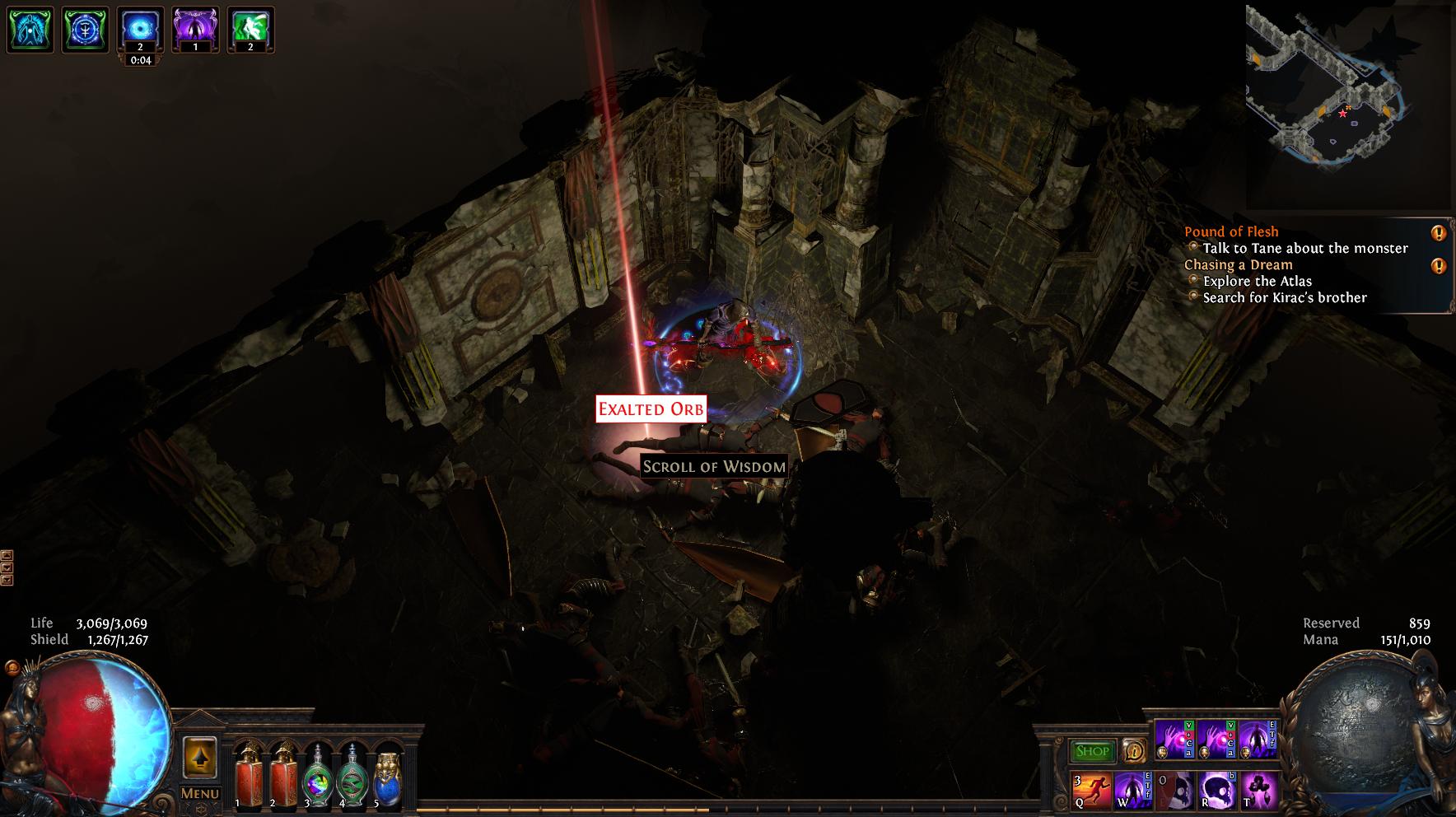 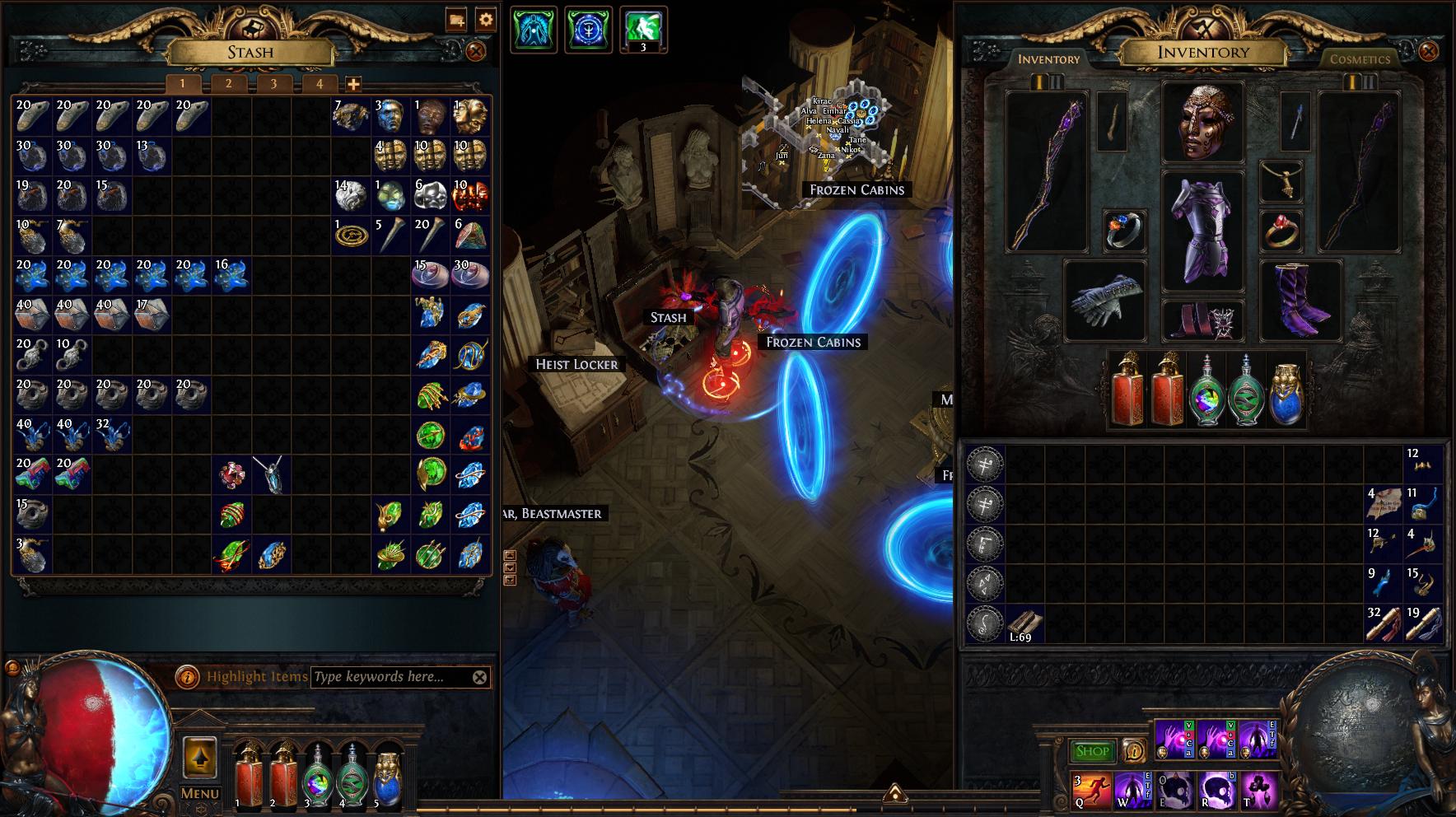 Anonymous: wrote:Haha, and i though i was doing ok

btw thanks for tips and help. Now i am full ED and see the potential in blight maps, breaches, ect. Very cool corona style char - spread desease around the corner and watch the world explode.

im glad you liked the build. it's really solid for a league starter, and pretty chill to level with because as you said its one contagion spread from around the corner and 2 or 3 screens get cleared if theres enough density. and from what, two button presses. ultimatums and rituals get deleted by it as well, its pretty funny to just see purple circles with ☣ pop non stop. build's only downside is that you cant rely on evasion alone even though thats what you stack , because of Ascendancy synergy. Jade Flask is basically a must. probably the most important item in the build imo.
#929
2 weeks 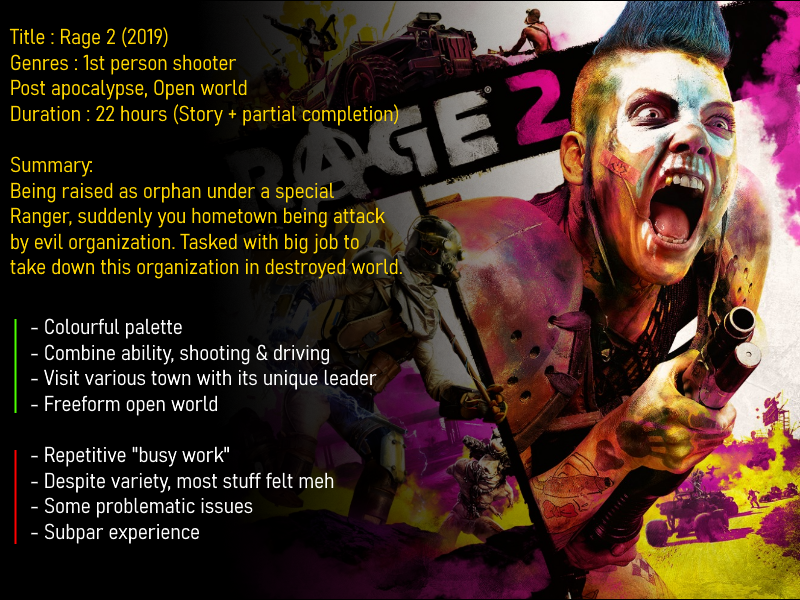 Only thing you need to know is the avalanche studio is pretty well known to create a repetitive open world where you can clear map markers doing simple tasks scattered in whole map. This is no different despite using gunplay from Doom 2016 (not the engine)

Rage 2 is a sequel to what i considered as "tech game" from ID software long time. I didnt play much back then since it was boring thus I review this with blank slate. Compared to doom, the game felt more fluid with tons of new ability to move around & kill your foe. The game gunplay was top notch, combined with open world in post apocalyptic made it fun to move around. There are some variety of vehicles, although it is locked by some progression or you have to collect them from open world.

Now for the negative part. This game have many issues. I dont understand how they perfected the formula in other games like Just Cause 3 or Mad Max managed to do this subpar game. The key point of open world is FREAKING COMPLETION PERCENTAGE which didnt exist in this game. Despite you have variety of skill and guns, none of the upgrade felt like game changing (mostly value changes), making it you will feel samey after unlock all important upgrades. The armor system in this game is freaking terrible, I use shotgun at point blank several times, and it failed to kill.

Rage 2 is disappointing because the fun is barely there. I not even mentioned about forgettable story progression. If you got the game for free from Epic Games Store like me, just put low expectation when you played it. Because there is no achievement and % completion, i decided to just rush to end of story and uninstall the games.

Either i continue playing this while watching anime or i moved to other games. I rather find other open world to fill my time.
And hurray for finally a "proper" game review in this thread. I think i missed several important details but just bare with it.
#930
2 weeks