Prime_Evil wrote:And about VTM Bloodlines, it's one of my favorite games of all times. Just too bad that it's known for being riddled with bugs. There is an unofficial fan made patch that fixes most of it's screw up tho, as well as giving it some QoL adjustments but haven't tried it out yet. One of Troika's last games if not the last before Activision screwed them as they always do. They basically forced them to rush a buggy game.

Yes I read that it was unpopular due to various bugs and the same launch-time with HL2 so it was kinda left in the shadows. Unofficial patch seems to been on work to this day so I can imagine most of bugs are gone. Have to try it.
#961
2 months

Donated 1 time
Not a full blown update, but Hearthstone Battlegrounds just introduced new tribe to the game called Quillboar. Personally i never tried the hero yet but oh boy all new cards feel busted for some reason.

Granted, i only played like 5 times today and managed to snatch 4 top 4 and 1 win. The most ridiculous one to me is definitely the tier 6 echo slam (i forgot the name). With enough blood gems, you increase EVERY units in your team for one round, making it much easier to win decisive late game.

But my winning run was menagerie that quillboar have 2 support for it (1 beast with blood gem synergies, and another one that buff based on how many different minion you have in your team. Quillboar might the most unique playstyle i think so far, that it have various strong units that have different playstyle. Although blood gem generator required specific card though (so non quillboar line up cant easily get access to it).


*On additional note, i just bought IPAD which one of my plan for a while. Kinda fun to know that I can pair xbox one controller with ipad and then i play remotely with steam link. I havent test it outside my room yet, but this alone allow for me to play reading game like visual novel while laying down.
#962
2 months

Earned over 100 cookies
T13'd blighted map ezezez the mtx reward doesnt seem to be that great tho... 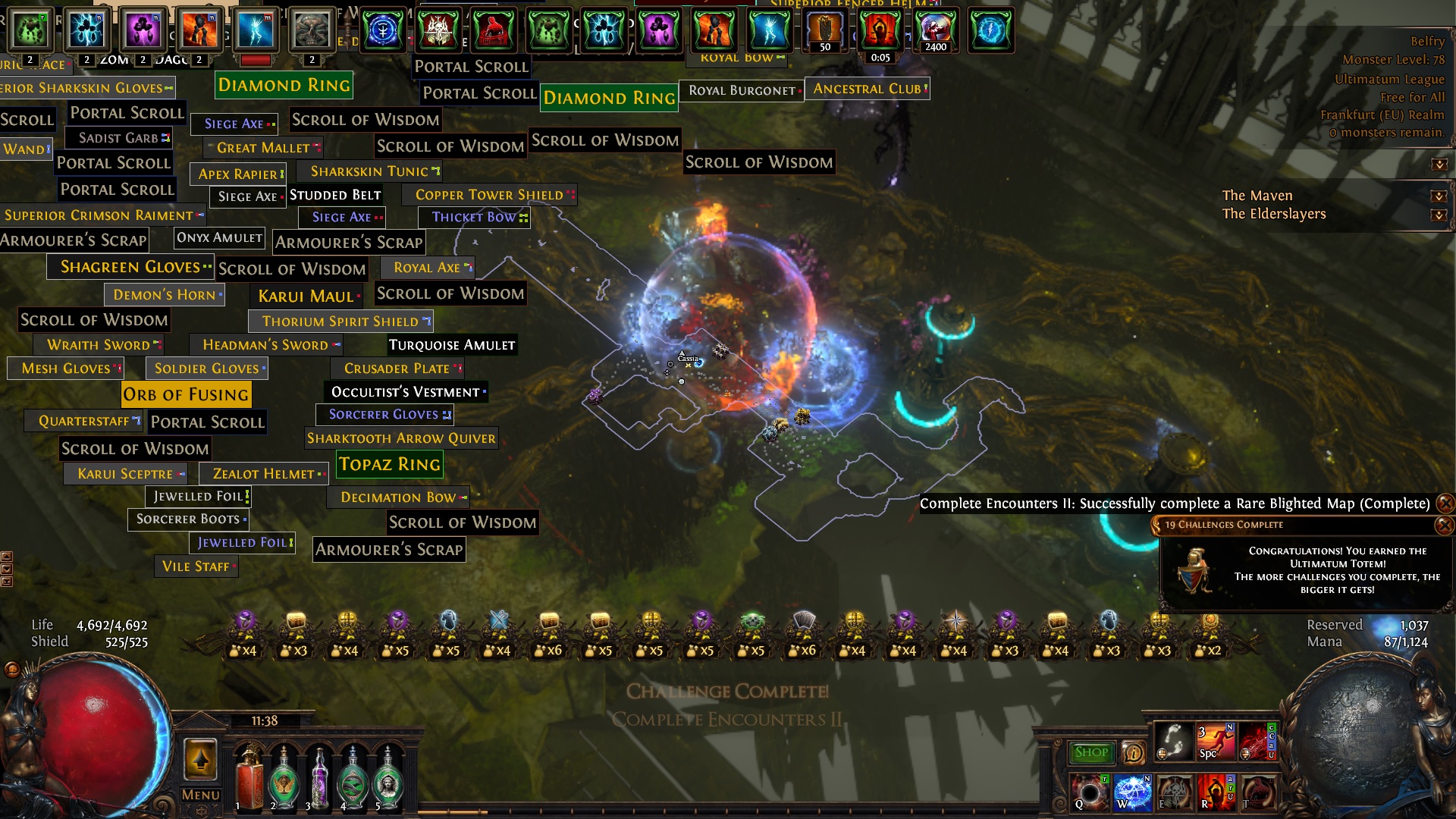 Earned over 100 cookies
I got six socket impulsa (bouth 1 socket version for 28chaos, spend 2 stacks of orbs to get 6sock lel), wasted 60 linked orbs and no luck. And i still need to delve deeper to find at least 3 red color recipe since i need 3r-2b-1g for it. And close to completing 100 maps - my highest achievement yet.
#964
2 months

Earned over 100 cookies
Overall spent about maybe 6K fuses trying to 6L my Inpulsa. I should just grind 6L prophecy or outright buy one with exalts at this stage.
#965
2 months

Donated 1 time
Usually I do full review for this, but since this is just a demo and I liked the prove of concept, I thought I might just shared it here.

The games is free on steam : https://store.steampowered.com/app/1290 ... ite_label/
And their kickstarter page : https://www.kickstarter.com/projects/dc ... unbeatable

It pretty much just a 2 button rhythm game that you have to judge from 2 different directions. I personally not a fan of this type (hard to read, like taiko no tatsujin or visual chaotic like muse dash) but I personally loved the artstyle and generally feeling of this anime meet jet-set-radio-ish (sorry, i dunno what to call about them) with animation style like studio trigger anime style.

I just already uninstall at this point (again not my style) but I assume some of you guys might like it.
#966
2 months

Earned over 100 cookies
Beat Resident Evil 8, it's ok. Considerably better than RE7. Took a lot of obvious clues from RE4 that's for sure, and even though i'm of the unpopular opinion of not having liked RE4 as much as the older Resident Evil games, i realize how much of an impact it made on the industry and see it as one of the best games of all times. But anyways yea, RE8 is pretty decent.

On another hand , PoE's optimization is still dogshit. Clicking on Ultimatum shrine while theres other modifiers on the map, especially Influenced maps and Betrayal'd maps makes ultimatum lag the game to almost a crawl. Seriously fuck this game, i'm almost 10K hours of game time on PoE i should be elevated to sainthood for putting up with this fuckery as much as i do. But i'm addicted so i guess i'll keep hating myself and my life still. 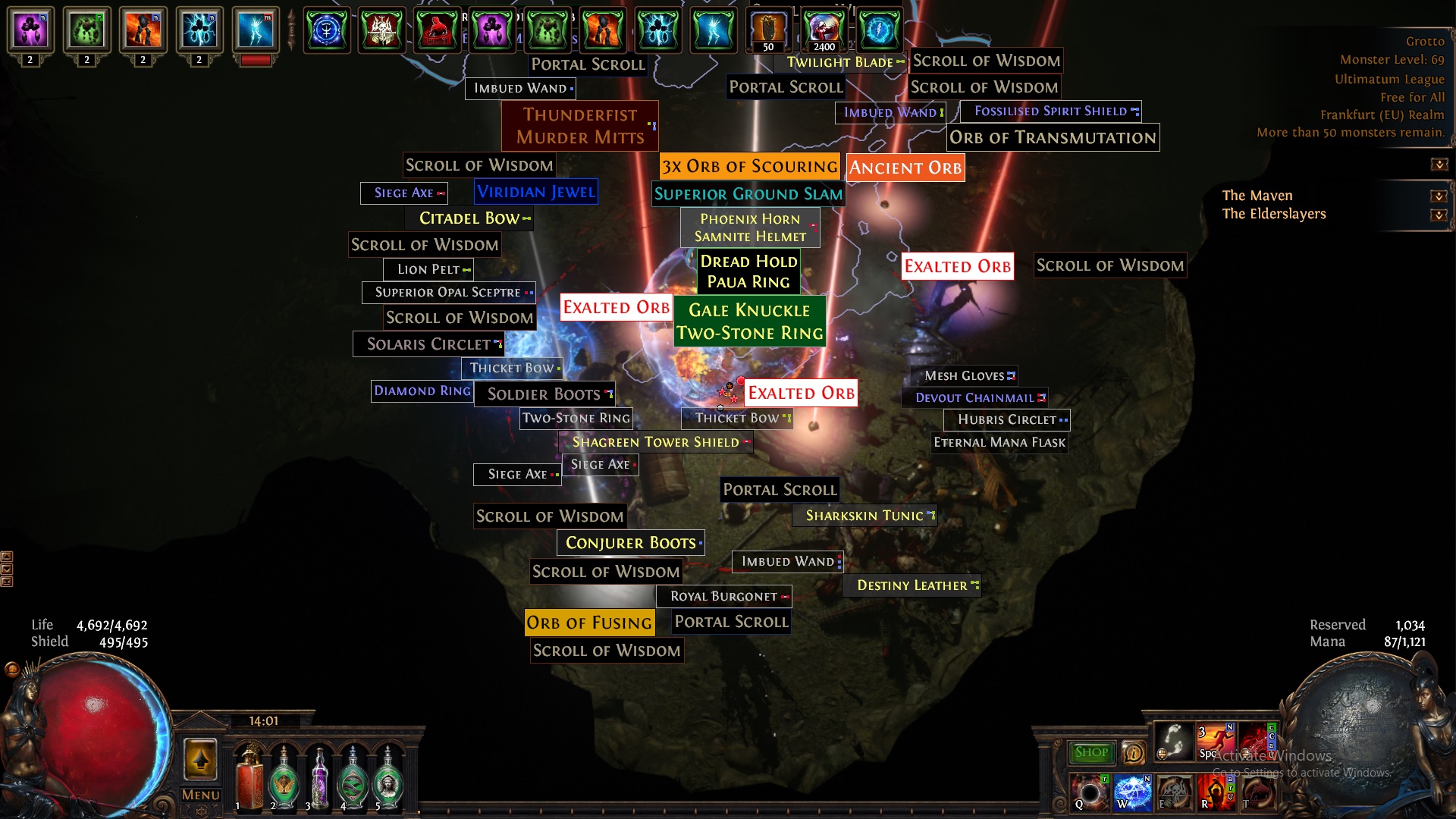 Earned over 100 cookies
Yeah, or open ultimatum in delirium fog or when harvest mobs pop out all at once our ... <insert your thing> . 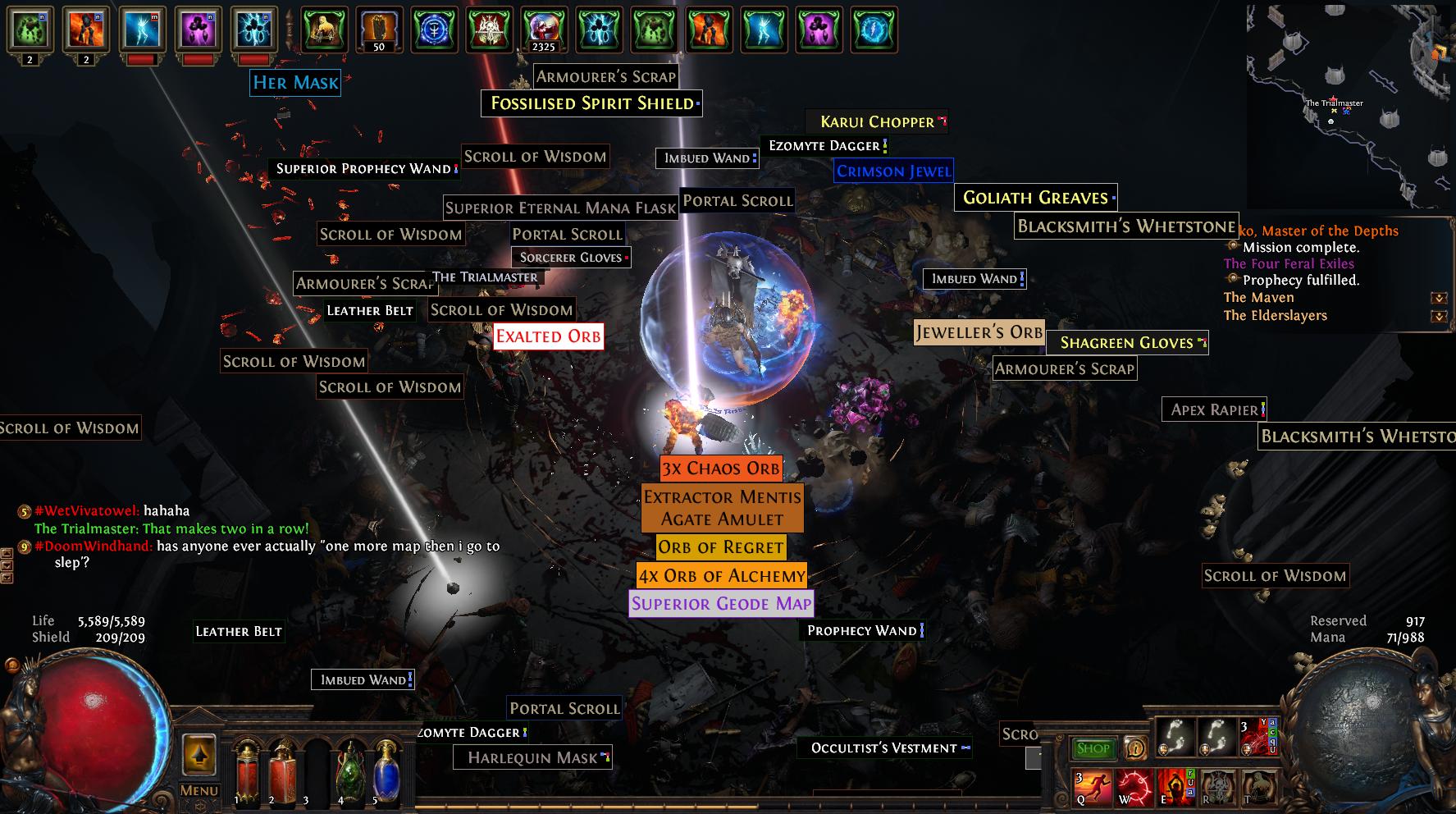 Donated 1 time
Get lootfilter, you showing too much junks at your current points.
Portal & Wisdom scrolls shouldnt be shown at your current level.
Wisdom can get by selling alteration orbs (if you ssf) and portal scroll can be bypassed with portal skill.

*Im sure there are some guide about in the forum, i usually just used a customized version of specific weapon type + add some chance base.
#969
2 months

Earned over 100 cookies
we're both not ssf, selling alterations for wisdoms is a waste when you can use them to reroll high ilvl flask prefix and suffixes and portal gem is a waste of a gem slot unless youre not leveling gems on equip swap. as for me i havent changed to a stricter fliterblade yet because i want to get 5K portal scrolls on currency tab, already have 5K wisdoms for a very long time.
#970
2 months