Donated 1 time
Man, feel im getting old if I cant push a simple game to completion. 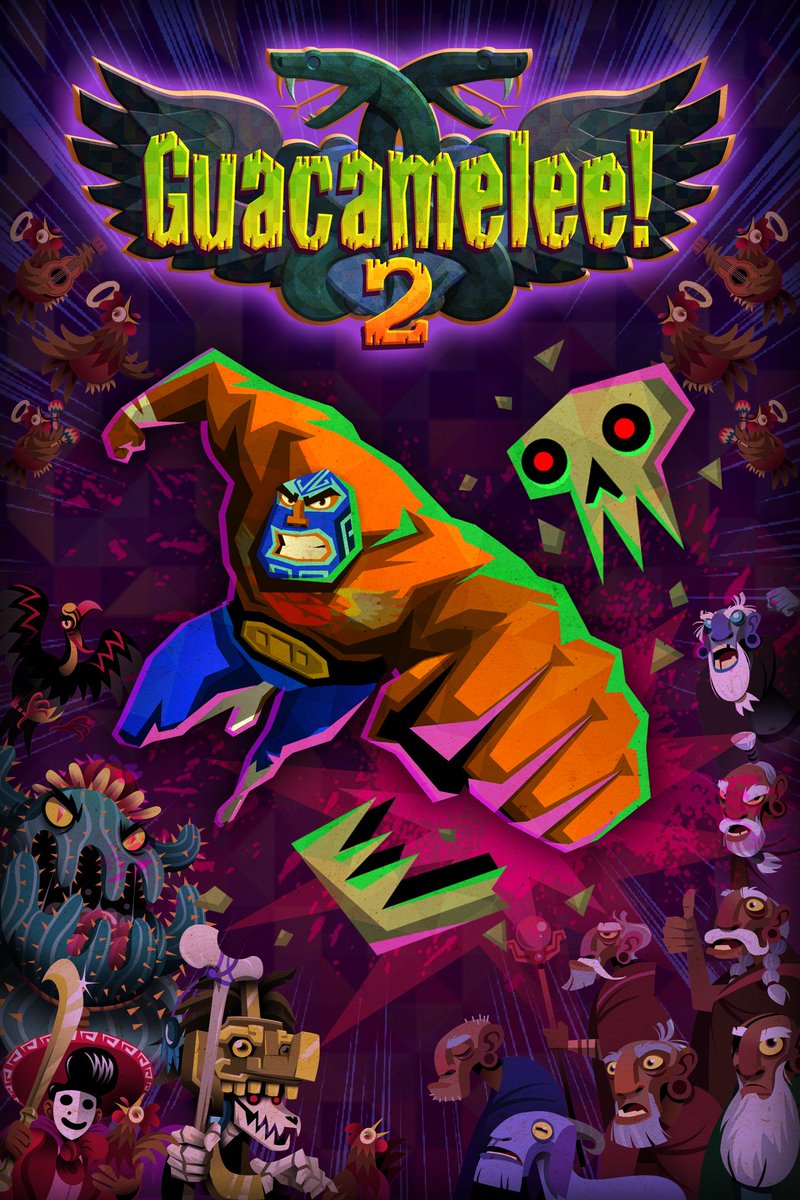 Im gonna assume everyone know pretty much what is the guacamelee series is all about. I have completed both vanilla version and the super turbo championship edition of the first game. It is combination of beat em up and super tricky platforming game, wish a bit of boss battle and metroidvania formula. Is it a good game? I would say so, but I cant deny that Im a bit disappointed because lack of innovation in the game. The game indeed improve several mechanic, mainly the expand skill tree and some new mobility skill, but i do feel like im not like playing new games.

Story wise, this game expand alot, especially the concept of multi-verse / timeline, which is kinda a cheap to expand the universe. However it does being played as comedic value though, like a several easter eggs area that have reference about old games such street fighter, pacman, and dedicated dank meme area. Combat & gameplay pretty much the same to me, although I missed the insane super saiyan mode and the customizeable bonus / penalty from costume in STCE version. This game feel like too simplified, despite having harder platforming.

Guacemelee 2 is still good game. I thought I could push the limit and collect 100% + get all achievement, turned out i just want to stop playing ASAP without caring for true ending. Im pretty sure i already collected most of the stuff, but hearing about super hard platforming just to get good ending is a turned off for me. I might revist it in the future, although i dunno how i would push my will without new game plus for hard mode.

Alternative : Hollow Knight is no brainer suggestion at this point, but if you wanted a metroidvania, i can suggest a bit like : Dandara, Sundered, Valdis Story, & The Vagrant. Im pretty sure you will find some good game from the list.
#701
4 months

Earned over 100 cookies
Started PoE again and this time it's a marauder with tank asscendancy and molten strike as main skill. Build is tanky enough to make mistakes, fun enough and damage is slowly building up. Yes, twinking a bit with gears from lacerator and having piles of crafting materials in stash sure helps a ton. But overall build can be done from scratch too.

Also turned on my old laptop back and it works. So expect some new posts about "forgotten mods" soon.
#702
3 months

Donated 1 time
MY GOSH, I SPENT TOO MUCH TIME ON THIS GAME 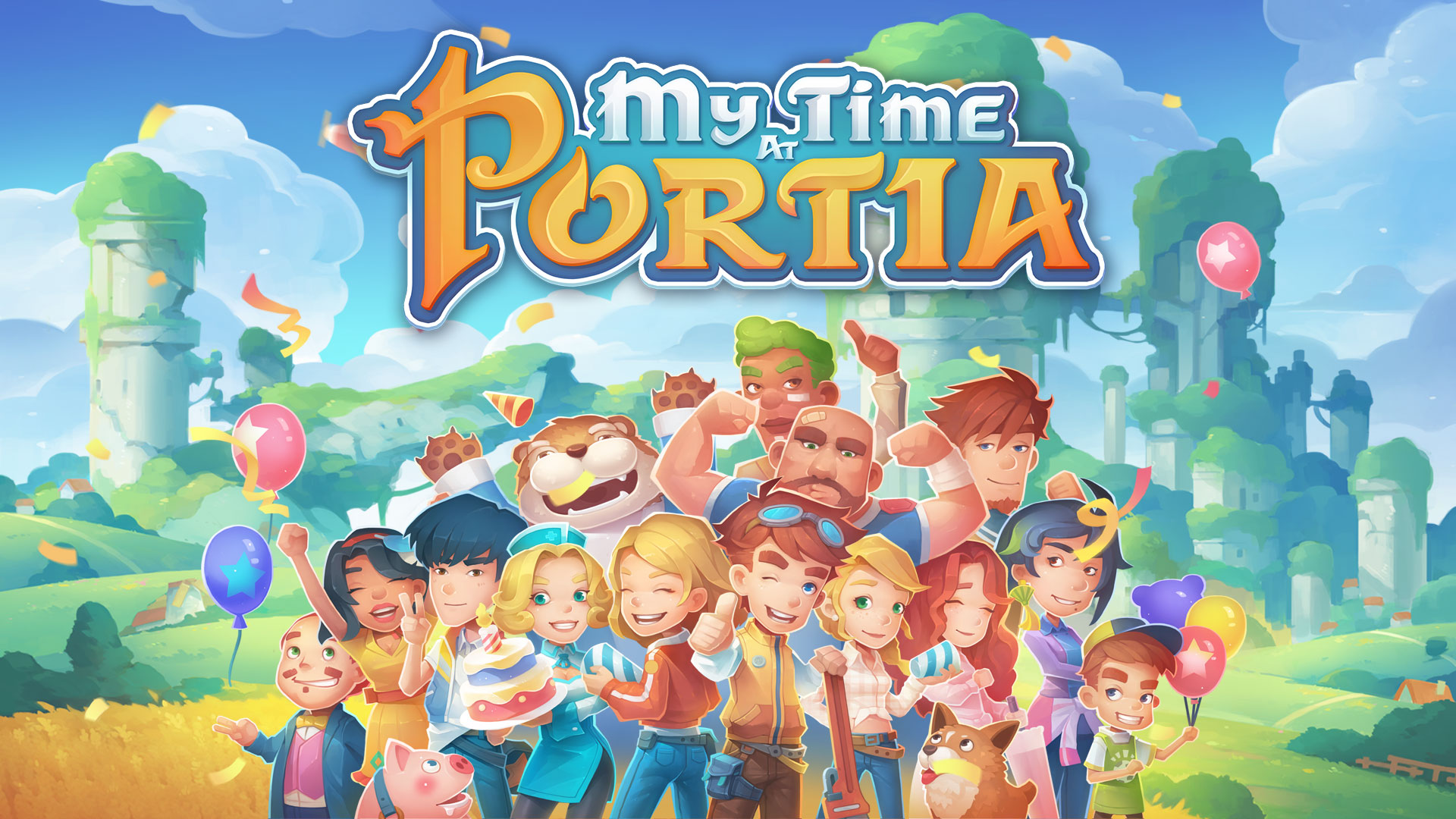 One of the genre of games that i have been actively trying to avoid is farming simulator or management sim. Mainly because most of them doesnt have short game objectives and largely focused on your day to day stuff. This is kinda building up routine until they throw you a curved ball to you, by introducing tricky missions or extra challenges that required you to keep doing same thing over and over again. If I wanted to give short summary, it made me like playing MMORPG .... alone, with all lively NPC, their daily routine, seasonal events as well as super hard dungeons with boss at the end.

Gameplay wise, it is kinda overwhelm at first, it was such a hook to try improving your daily routines, to build your economy, as well as to expand your economy. You can keep improving several stuffs like increasing your resource gathering speed, your combat effectiveness, your relationship with some NPC or just going making wealth by crafting tons of stuff to sell them. There are tons of stuffs to do that you wouldnt able to do everything, because it used a system of day / calendar, in game daily clocks and player stamina which limit the amount of your action per day.

At the end, i spent like 90 hours in this game, despite i switched to speedhack mid way, because the game are kinda mind numbing for gathering part. I would say it tried to do many stuffs at once, which not exactly perfect, but good enough for whole good time feeling. The only i didnt like the progression though, because there are too many stuff that required you to wait several days before anything interesting to happens, thus it feel like it stretching the game too much.

*I dont have alternative for any farming simulator, but i have some games suggestion which made me ...playing like a zombie to progress the storyline. Space Rangers HD is good take for space sim, Smoke & Sacrifice is decent action oriented games with depressing tons. Lastly... probably.... yakuza series? At least there are tons of side missions stuff to do in that game.
#703
3 months

Earned over 100 cookies
Playing Wolcen. I didnt like the beta builds at all, but the launch build is pretty solid. They fixed a lot of what i hated. So far its pretty good. Doesnt have Hardcore yet, though im guessing that'll come in later patches.
#704
3 months

Earned over 100 cookies
Done all acts on juggernaut molter striker yesterday. Not impressed by comparison to lacerator. Tankiness is there, even with tabula rasa used all the time i managed to die only few times in the end. But damage part is sad. Using two lead sprinkler at the moment and stacking around 600 str. Area is small and it just feels slow.
Switched back to lacerator and it's a blast. 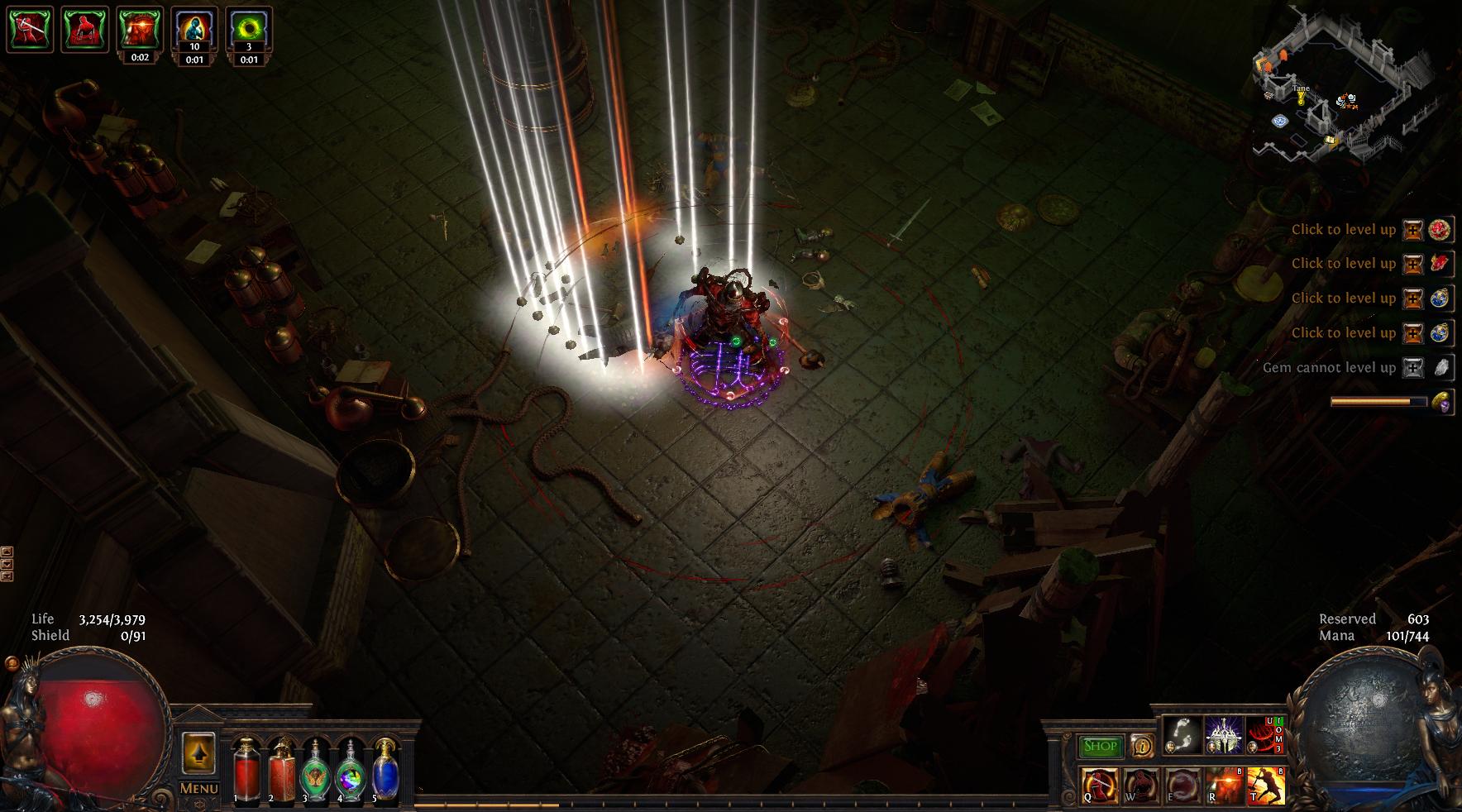 p.s.: on the fun part - bought two thief torment prismatic rings, since i thought i could use two of them .... what a bummer. 8 chaos down the drain 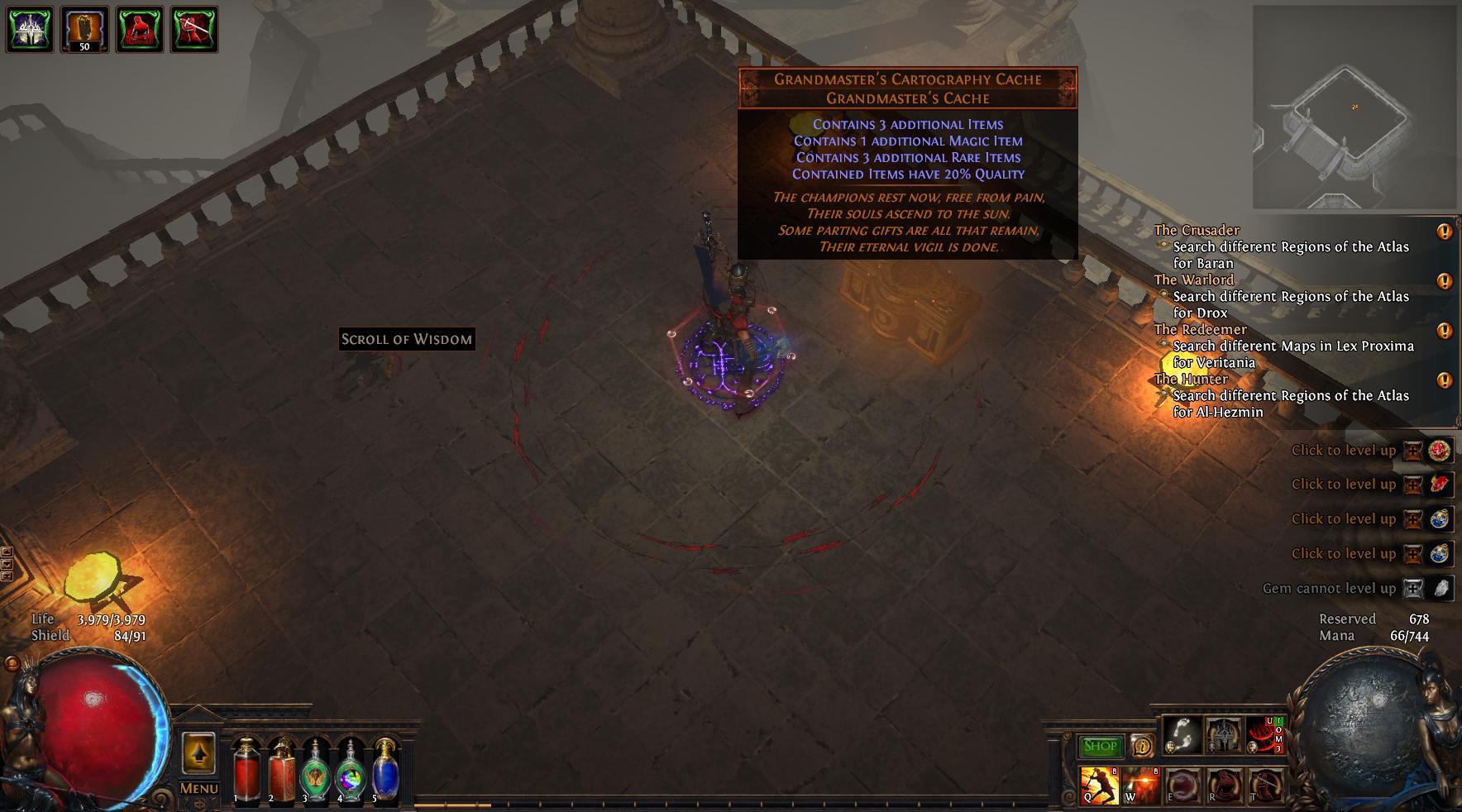 Earned over 20 cookies
How can you have low damage on molten strike? xD This skill has like million ways to scale it :
- Point blank always working - permament 30% more damage
- Elemental Overload
- Iron Grip
- Projectile shotgunning

It's absolutely best melee skill for tanky characters :
PoB in video description - this was my league starter and handled season smooth like butter. Definitely my best char i ever played despite low clearspeed.

Earned over 100 cookies
Well i am only 73 atm, no points for all those skills you mentioned. But will restat a bit and get those projectiles. Have iron grip, point blank already. Elemental overload is a bit far for now. Also body armor is tabula rasa, helmet is low level cap for resists. And still in the end resists - bad, defense - bad and damage 6.5 according to char screen. Main issue - time to get to target and innitiate those molten balls, same crap as shower of rocks in median, takes time for them to start working.
Already did a lot of areas with lacerator in atlas. Doing t14 for maps, lvl 89.
#707
3 months

Earned over 100 cookies
Quick question regarding PoE crafting bench. Got an armor with 6 links, now i want to change colors and get two sockets blue. How to do that - there is recipe at least two blue sockets. Will 6 link remain and just color change ? Ty.

Anonymous: wrote:Quick question regarding PoE crafting bench. Got an armor with 6 links, now i want to change colors and get two sockets blue. How to do that - there is recipe at least two blue sockets. Will 6 link remain and just color change ? Ty.

Anonymous: wrote:Also, Ori what is your molter strike setup ?

There is path of building code in video description which you can import and look up everything - iirc i had two molten strike setups. While leveling i was using infernal blow - melee splash - elemental focus - ancestral call, but then switched to full molten strike, but i liked having separate setups for bossing and clearing, just for the sake of avoiding skill switching.

Earned over 100 cookies
Thanks. I don't have the program to use that code. Anyways, will get some better items first and do some more content with lacerator which i enjoy the most at the moment. Somehow it fits my style and i make him work.

Not even sure what happened here. Some portal in area and monsters constantly pouring out. Took long time and in the end everything went poof and drops came out 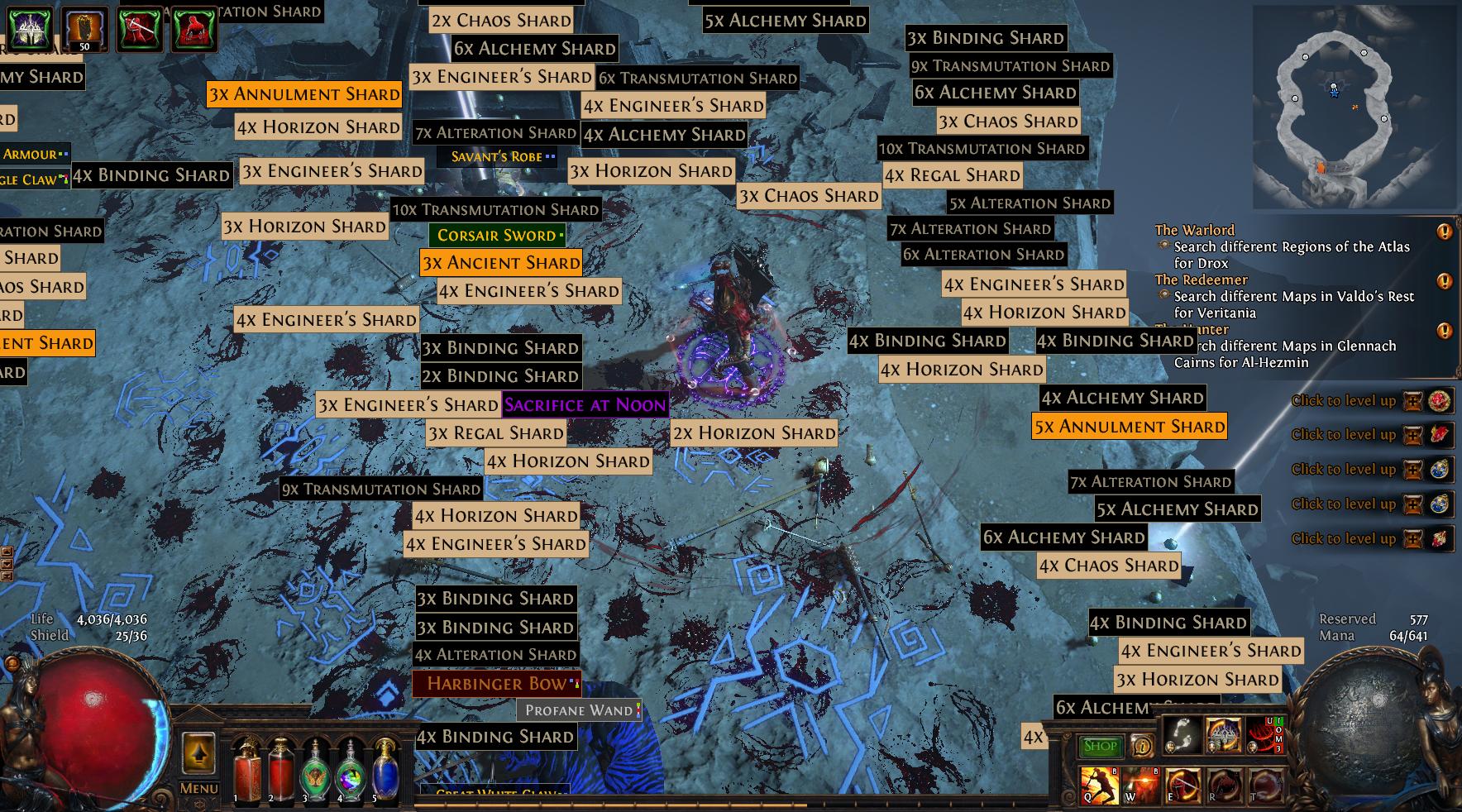