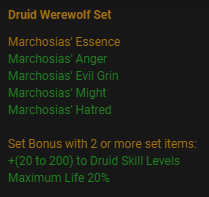 Goatmilk wrote:So much for being excited for bringing back the elemental sorc builds.. what a joke. UHM is going to be good for sure, but the announcement for the patch made it sound like there'd be super amazing changes for a lot of stuff that just didn't get, well anything that matters really. -_-

Not sure what's up with the downvotes, you're right. After the announcement, I expected a general buff to ele & poison trees but it ended up being a single target skill rework + pyroblast and tempest buffs. I guess you gotta agree with every change(or lack thereof) blindly no matter what.

How are you any different than these "blind agreers"? You're making the opposite argument with the same lack of information and playtesting.

It's a bit amusing when people say the announced sorc changes were "misleading" when word by word, what happened is exactly what was announced. I encourage everyone that thinks so to actually read the "Build Improvements" paragraph and not jump directly into the builds list to assume they are getting an amount of changes on par with new assassin build.

On the other hand seeing certain people demand early patch notes only to get super salty and cynical at some random "taken out of context" changes, makes me question if we should do early log releases at all. This endless battle between conspiracy theorists and believers is just getting too old and toxic. Now it seems that if you support a change you're dumb because the devs are just trying to fuck us over.

Even calling buffs "a nerf" seems to be the trend now and I've even heard (multiple times now) that this blatantly obvious buff patch is a "nerf patch".

Oh well. Keep it civil folks, is all I ask.

I'm just dissapointed by the scope of the changes, like I said it seemed that there's gonna be a general buff to all ele sorc spells, not just the single target ones. And while the paragraph you're talking about does mention single target spells, it also talks about aoe damage as well, which is why I expected a general buff, not just for single target(save for tempest and pyroblast) - and I"m talking about buffs, as in increase in damage numbers, not a full tree rework like you're implying by mentioning the trapsin. Other than that, the patch overall does sound good and the single target dmg buffs were a necessary improvement, I just expected more is all I'm saying.

Not sure what's up with the "keep it civil" line though. All I said was that I'm slightly dissapointed, I never called the reworks a nerf, either, cause they're obviously buffs for ele sorcs vs bosses. That is simple feedback. Not even a single "fuck" was used, so I'm a little confused there. Also no need to call a bit of preemptive negative feedback a "conspiracy theory". I could always end up being wrong and looking like a retard, you know.
#112
11 months

@Frytas: only the first sentence was directed to you. Also sorc clear was fine and there were buffs targeted to clear on the trees that needed it.
#113
11 months

@Frytas: only the first sentence was directed to you. Also sorc clear was fine and there were buffs targeted to clear on the trees that needed it.

Ah, you quoted the post so it seemed like it was a direct response. Ok then.
#114
11 months

Where? It's not on the forums or the version log. I'm not seeing it.

iTHCx wrote:Where? It's not on the forums or the version log. I'm not seeing it.

iTHCx wrote:Where? It's not on the forums or the version log. I'm not seeing it.

Median XL Team Member
Yeah sorry. We don't want to contaminate the finished log with irrelevant fixes so usually hotfix notes can be found in such forum topic (same as we did in 1.1)
#118
11 months

Jaredm13 wrote:Not sure if this is the right place for this but my Red Vex Mantle now requires level 678 to equip. Am I doing something wrong or is this a bug?

Red Vex Mantle has been removed. In order to not make your char unusable it has instead been placed on a dummy set and given 666 lvlreq so it cannot be used.
#120
11 months