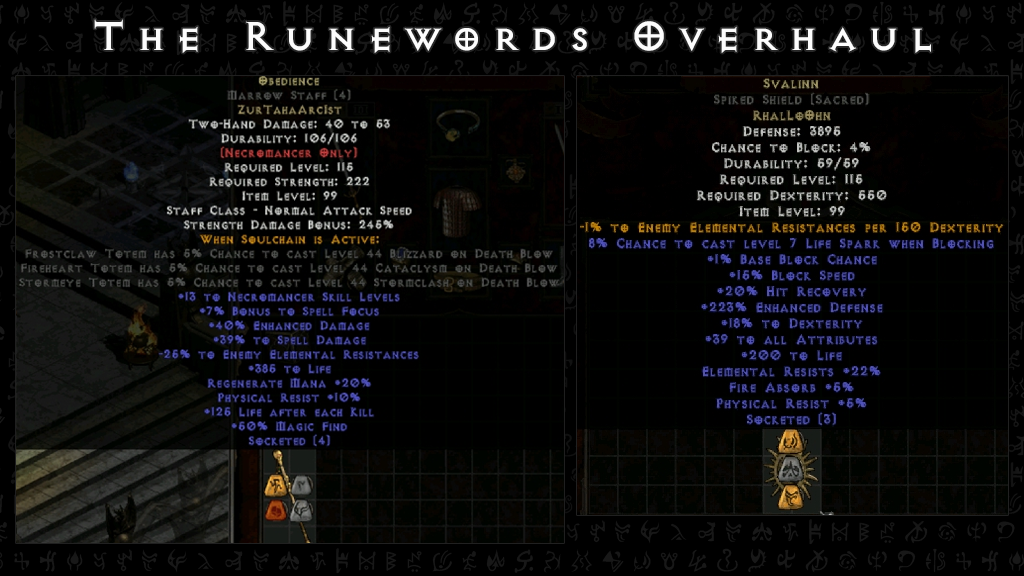 The RW rework aims to make the process of creating a runeword more exciting and less about the monotonous rerolling of bases, jewels, and affix rolls. We want to make the runes themselves be the center of attention, so their drops can be relevant and thrilling once again.

There are too many of them. Runes between Sha and On really add nothing to the table, and truth be told, they look nowhere as good as the vanilla ones. This rework begins by reducing the "basic" rune amount to the classic 33 runes, with Zod being the highest.

Don't worry, the stats obtained from the runes have been re-organized, You can still get all of the practically useful stats for socket fillers.

Whether it's Teganze, Fauztinville or Toraja, the current most powerful runes are all locked away in specific rifts. We want the core rune kit to be available in all zones, so you're "always" farming for them - and they are an essential part of the game.


In other words, you now have the 33 basic runes and the same runes (with improved stats) as a continuation. So, enough El (r01) runes can technically make you a Xod (r66) rune, but... please don't try it.


It is worth noting that the power level of the new runewords is greater than before, and accounts for the loss of jewel space and re-rolling (which was already disabled for the old enhanced runes).

We felt like runes weren't in a great place prior to starting this long-awaited rework, so we took a step back and improved everything we didn't like about them before introducing changes to the runewords themselves.

The first step was to look into our realm stats and see which runewords were not used at all.


Finally, and as you can tell from the image, there are many new exciting runewords awaiting you in 2.0!
The release date will be revealed soon

Won 200 auctions
This is wonderful！

Earned over 20 cookies
Great. I love that this stuff is reworked. Now it will bring much more fun than before. I can't wait for the release date