ivo1617
Dark Huntress
10 | 0
69
I am experiencing a lot of lag in Kurast 3000 BA on hell difficulty. However, my internet connection is good and I am not getting any lag anywhere else, including Kurast 3k on Nightmare difficulty.
#32
1 year 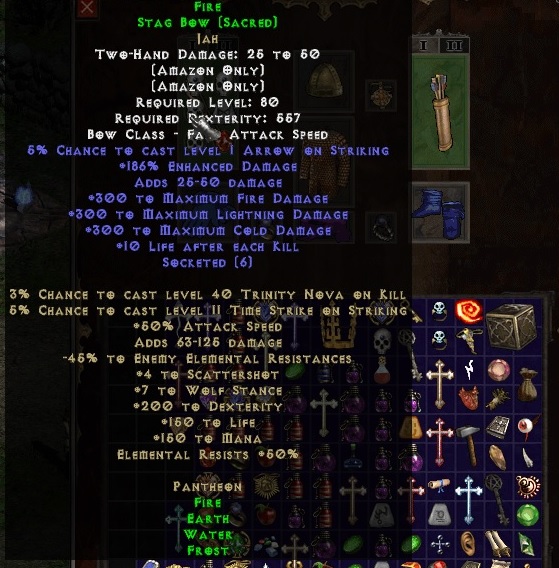 Can't find any update path saying that damage for it is to be reduced.
Another thing is when i put skulls or Jah rune it didn't increase any dmg to bow or total character dmg

Edit:
25-50 is from bonus that should appear,
i tried insert different jewels and they add bonus as stated.
What is main problem is weapon has no base damage itself lol.

Edited by Dimhil 1 year.
Gorghor
Prowler
18 | 0
0
I noticed on my melee necro that both carnage and parasite were not generating procs such as crucify on
Visegrip

Has a thread with over 50.000 views
Bow druid feedback

This league I was on the verge of rerolling a bowzon, but I decided to go with bow druid. Here's some feedback that I think can greatly improve the class and more specifically in labyrinth.

Bow tree doesn't have any skill that acts as a mediator between heavy single target damage ( (homing) nova shot) and good aoe clear (cascade). This leads to serious problem when clearing the common labyrinth monsters. In higher tiers, your cascade will deal almost no damage as it is specialized in dealing lots of damage against huge packs of monsters, comparatively to wyrmshot which is more balanced in that aspect meaning it's really good against moderate amounts of monsters, but doesn't scale so well versus huge packs of monsters such as fautzinvile (cascade will have a better clear vs 70 monsters on screen for example). However, wyrmshot is already not that good in high tiers of labyrinth and you will be pidgeonholled to use askarbydd for the rapid wyrmshot. Compared to that, druid only had nova shot really for clearing extremely resilient monsters (which are all monsters t10+).

But there are fundamental problems with novashot.

Firstly, it cannot leech because it's full conversion to fire damage. Despite leech being heavily reduced in high tiers, it's still extremely valuable, especially with high values of leech and it helps tremendously against regular monsters where you don't want to constantly potion up. Mana sustain is also a problem and you will be probably pidgeonholled into using Ix staff runeword, which is pretty counter intuitive and a pretty cumbersome gameplay for a bow class.

Secondly the damage doesn't scale that great due to insane elemental resistances the enemies have in lab and the 50% absorb modifier. That means there's going to be a tradeoff somewhere for that fire pierce you need to get. Personally, I can barely get somewhere 60-80% pierce without runes if I decide to socket my gear with max res gems or whatever else.

Thirdly, the damage is not consistent. If the monster moves slightly to the left, you can miss as much as 80% of your entire homing nova shot. The fact that it knockbacks (for some reason) doesn't help at all. The regular nova shot requires facetanking and that's pretty risky in high labs as a supposedly ranged character, but also needing to position perfectly which is a difficult task if you have desync. Compare that to rapid wyrmshot for example where you barely miss a few shots if the enemy monster is mobile due to the constant damage output.

A skill that has no place in the bow tree is spore shot. It's just a worse version of cascade and there's absolutely no reason to having it while cascade exists. I don't know exactly how the d2 engine works, but I presume that if the parent arrow misses the target, all its children arrows will also miss the enemy monsters. This behavior seems to be consistent with my testing. That means spore shot gets exponentially worse the less hit rating you have. I believe that a skill that's good for clearing small, tough group of monsters could replace it. Something like... quill storm. But not exactly quill storm, of course. And please don't put it on an item, just replace spore shot.

Overall, druid will always be weaker than amazon due to two things:

1. He has 1 less attack frame on bows. Amazon has 6. Druid has 7. He also has pretty bad fhr breakpoints, but that's another story
2. He needs strength for his bows. Dexterity is naturally better because it provides attack rating in addition to damage, so that's why bowzon doesn't have to worry about attack rating, while bow druid struggles to get a decent hit rating. I believe the damage bonus he gets from strength and his passive doesn't make it up for the lack of attack rating.

There aren't only downsides to bow druid though and I am willing to admit that the dirge runeword may be a bit too strong. In fact, it's so strong that you don't want to get anything else once you have this bow. Why would you? Yes, dirge caps to something like 400 max damage, but the 20% deadly strike and 250% ewd on it more than makes up for it. Besides, there are a ton of sources of flat physical damage so that shouldn't be a problem. If bow druid is to get buffed in other departments, this bow needs to be tuned down a little bit.

Won 50 auctions
Just used a couple dyes to be dark red, and did absolutely nothing to my char. Seen a lot of people where the white displays correctly. Why other colors don't besides in your inventory, I'm not sure. 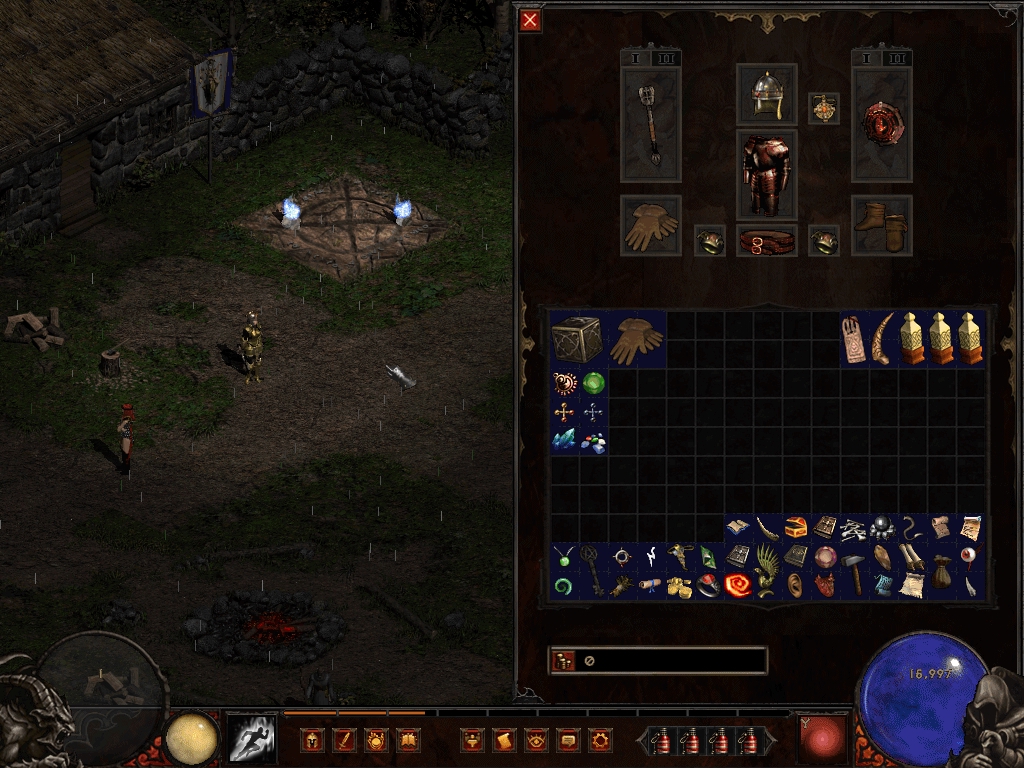 brassmuffler
Sasquatch
63 | 1
157
I really like how you guys keep iterating and am enjoying the new features. I think most people will agree with this request: please implement shared stash. Not only is muling a bit time consuming / annoying, it is a bit risky -- example: I was moving gear to a mule and my connection was dropped from the server, and when I came back, the game instance was gone along with my items.

So, while I am enjoying the new stuff, in my opinion, the single greatest improvement this game could receive is currently shared stash. Happy development

Vodkaxxl
Imp
4 | 0
0
I cant create my own game. I mean even loadscreen doesnt show up, just game is freezing for a moment and after few seconds im still in chat window. But i can join to others game

Also i think A5 merc AI is failing this patch, facing the walls, stops and freeze much more often than previous patch, doesnt follow etc.

JeppeAndersen
Sasquatch
61 | 0
0
Why isnt andariel dropping catalyst of desstruction on norm? And why don't warriv give it to me? I'm playing on SP, and I have no clue how to fix it. Game is upgraded and everything
#39
1 year

Vodkaxxl wrote:I cant create my own game. I mean even loadscreen doesnt show up, just game is freezing for a moment and after few seconds im still in chat window. But i can join to others game

I'm also having this issue after this morning. does anyone have any answer for this yet?