Nantuc
Vampiress
35 | 0
0
Patch 1.6: Werewolf Twisted Claw which is now supposed to be heat seeking is still static and does not "Seek" at all even though there are many targets in the immediate vicinity. Tested in Labs T14 with level 145 Druid.
#2
8 months

BrecMadak
Jungle Hunter
27 | 1
0
v1.6. Mercenaries tend to get glitched quite often even by small obstacles more likely than ever seen before.
#3
8 months

This skill does pathetic damage on some monsters and bosses with block and I think the above hypothesis might be the reason why a skill like deathgaze often does more damage on many bosses and monsters.

EDIT: To clarify, when it hits, it hits really hard, it just rarely seems to hit.

Goatmilk
Vampiress
37 | 3
2356
Shadow refuge gives +3% psn spell dmg.
Didnt check if one of the other skills give more, but seems to be a leftover from twin fang being removed either way.
#5
8 months

Goatmilk wrote:Shadow refuge gives +3% psn spell dmg.
Didnt check if one of the other skills give more, but seems to be a leftover from twin fang being removed either way.

Well, for the last 2 patches that bonus didn't work anyway. So it's just a text bug.

dronn1k
Prowler
16 | 0
113
Rathma's Chosen aura has no effect on the player. Skill obtained from Relic. 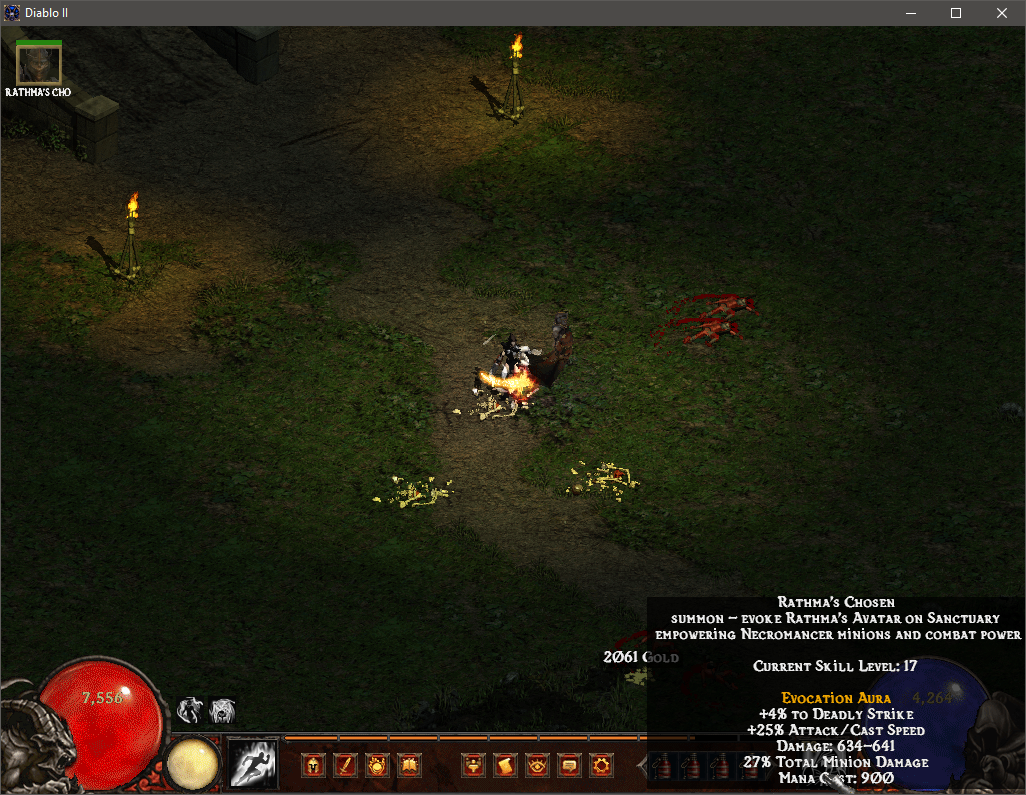 Created a complete character guide
I've noticed that the Druid Skill "Elemental" doesn't hit some targets they way it should. Veteran Monsters, some Tower style Mobs, Baal, etc.. The initial hit does a tiny amount of damage but the DoT flames won't hurt these guys.
#8
8 months

Milkshake
Rust Claw
84 | 3
627
Hurricane feels buggy. The initial cast animation doesn't seem to be effected by FCR or IAS. It causes major issues when it comes to being stun locked.
#9
8 months

Diaco
Daystar
670 | 17
0
Some feedback regarding elemental bases: I love the concept, I just wish they were actually usable. Since they came out I've been trying to make an elemental build work, but they require far more investment than regular physical bases, for essentially way lesser payoff and many disadvantages. I've been able to farm dunc and fauzt with elemental builds, sure, but the problem is that the level of investment to attain that as opposed to physical is insane.

Here are some problems I find with the current state of elemental bases:
1) Though the addition of IED does help elemental bases, it's way too rare and in too low numbers to actually make them useful. There are no SUs with the affix (not even elemental base SUs!), no set items or bonuses that provide it, and can only be attained via MOs, rainbow stones, trinity shrines and charms, albeit in baby numbers that don't actually make a big difference. A good way of solving this could be to make the IED MOs available to all gear, instead of being restricted to weapon only, or maybe even actually adding IED to the affix pool like almost all other modifiers.

2) Only two skills provide IED right now, Nephalem Spirit and Anathema which means that elemental bases are almost restricted to barbarian and assassin. Even though barb has neph spirit, the actual elements on elemental bases don't synergize well with his skills. Stormblast requires a sword, but the only elemental sword is cold. You could argue that stormblast doesn't provide any actual lightning bonuses, but if there was a lightning sword you could actually synergize it with daedalus in the same skill tree. Iceburst requires an axe, and unlike stormblast actually provides a bonus for cold damage, but the only axe elemental bases are lightning and fire, in fact, the two most powerful axe skills are cold based. At least barbarian has a way to sustain with an elemental base in the form of Blood Hatred... On the other hand, Assassin has no way of sustaining with an elemental base. This is not a bad thing per se, but the problem is that the elemental damage on Wrist Blade is so low, even with Anathema and full investment in pierce and IED, that in the end I don't feel there's any actual benefit for going lightning instead of physical (except maybe to kill necrobots faster?). As far as I can see, going elemental provides only drawbacks on assassin.

3) IED is restricted to very few and VERY rare sources of sustain. LoA is the most common, but will only work on melee hits. Life Spark is a great source of sustain, but it's only available in crafts and
Flameskin

Flameskin
Scale Mail (Sacred)
Defense: (7200 - 8440) to (8922 - 10307)
Required Level: 100
Required Strength: 1050
Item Level: 120
Adds 5 - 7 Fire Damage to Weapon per 2% Attack Speed
Enhanced Weapon Damage -150%
1% Chance to cast level 6 Life Spark on Striking
-20% to Enemy Fire Resistance
+(150 to 200)% Enhanced Defense
+(1000 to 2000) Defense
Maximum Fire Resist +2%
Total Character Defense (50 to 75)%
Requirements +100%
Socketed (6)
, which means you either go with a craft or go fire (assuming you are using a heavy multihitting skill and have the actual SSU). This almost nullifies all elemental base SUs unless you are melee or are extremely tanky via other means. then there's life after kill, which is an actual option, but the problem is that most sources of life after kill reside more in caster gear than WDM gear, and since elemental bases rely on WDM skills this makes it very hard to attain any relevant level of LaeK without sacrificing other stats. And last there is life on striking, which is so rare and in so low numbers that I don't even think I have to explain why it's not practical.

4) Gear becomes very restricted when trying to go elemental because there are few bases and all have fixed elements. If at least elemental bases could roll different elements, this could open up a ton of gear permutations and possibilities.


Anyways, the only reason I'm making this post is because I really, really, want to see the concept of elemental bases grow and actually become more than a meme. I don't see many people experimenting with them, and it makes sense, because right now they are so restricted in so many ways that there's not much theorycraft to be done around them. I'm not an expert by any means, so maybe I'm missing something and there are builds out there that can take advantage of elemental bases (besides cold dex wolf), and if so I'd be glad to hear it, but as far as I can tell, the consensus is that there are no viable elemental WDM builds.