Created a complete character guide
"..A Beast I am, lest a Beast I become.." 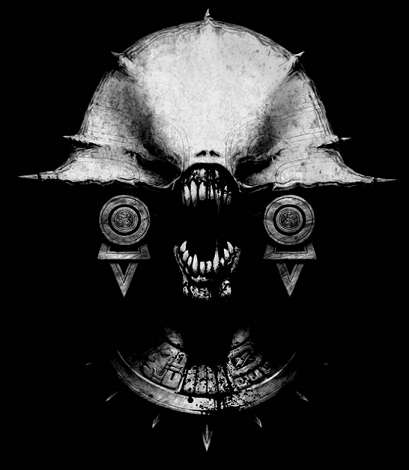 
. Tiered uniques will carry you up to some 125 ubers easily without even farming for signets. This includes all Rifts.


STRENGTHS AND WEAKNESSES
For:
Against:

LEMURES OR BLOOD THORNS
► Show Spoiler
While Lemures boast slightly higher single target damage over Blood Thorns they are very awkward to clear packs with. Blood Thorns is very consistent with its damage, and might stack even better on a target with a big hitbox. For example Act bosses and many uber bosses. Before the mid season nerf to Divine Apparition damage (Still strong, just not strong enough to one shot Harpylisk packs without building just for it) I was going to build solely around it, but alas its not happening.

For the moment I believe Blood Thorns build will do its job more consistently, with Lemures not far behind. Remember there's nothing stopping you from trying both as respec methods are cheap and plenty.

HOW TO PLAY
Buff up. Preferably starting with Superbeast, because it has much better FCR frames. Kill with either Blood Thorns or Lemures. Later on use Divine Apparition to reposition/clear screens depending on your skill build choice.
My keybinds with an added explanation below


ATTRIBUTES
Str: Enough for gear early on. Later on Stormlord will cover your your Str/Dex needs.
Dex: 0
Vita: Max
Energy: 0

SKILLS
There are many possible skill builds. Some choices are tied to your current combat speeds which are tied to breakpoints. Uber quest progression build also calls for different choice than farming build.

Below a general purpose build focused on progressing uber quests in Tiered Uniques:

Superbeast: 1
Divine Apparition: 1
Blessed Life: As much as you need to hit 50% Physical Damage Reduction. This is important, because you rely on regeneration more than you rely on defense.

Grim presence: 1
Bloodthorns OR Lemures (pick one): MAX
Possession:26 for 35% dodge.
Sanguine Covenant: MAX
Stormlord: MAX early on, with most max skill charms i keep it around 25
Vessel of Retribution: 1
Rapture: Leftover points is okay. I keep it around 10.
Sacred Armor: 1. Worth it for the additional regen. It might save your hide, but mind the cooldown


BREAKPOINTS
Before 90 try to keep your attack speed (IAS) as high as possible without sacrificing much damage. Below are Superbeast breakpoints:
FCR & FHR:
► Show Spoiler 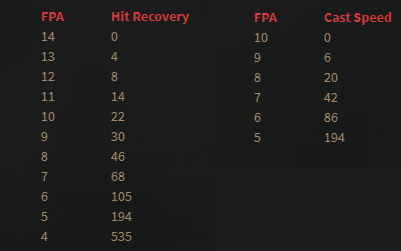 Whatever FCR you get will be enough. Buff with superbeast before casting rest of the buffs, as the frames are much better than on Paladin. 5 fpa hit recovery recommended, 4 is possible in TU's with some points in Rapture
IAS:
► Show Spoiler
This one depends on three factors:
To make number crunching less of headache I suggest downloading D2StatsReader and Speed Calculator in Java from https://www.median-xl.com/tools.php.

Below a sample calculation using only the stats of
Malthael's Wrath 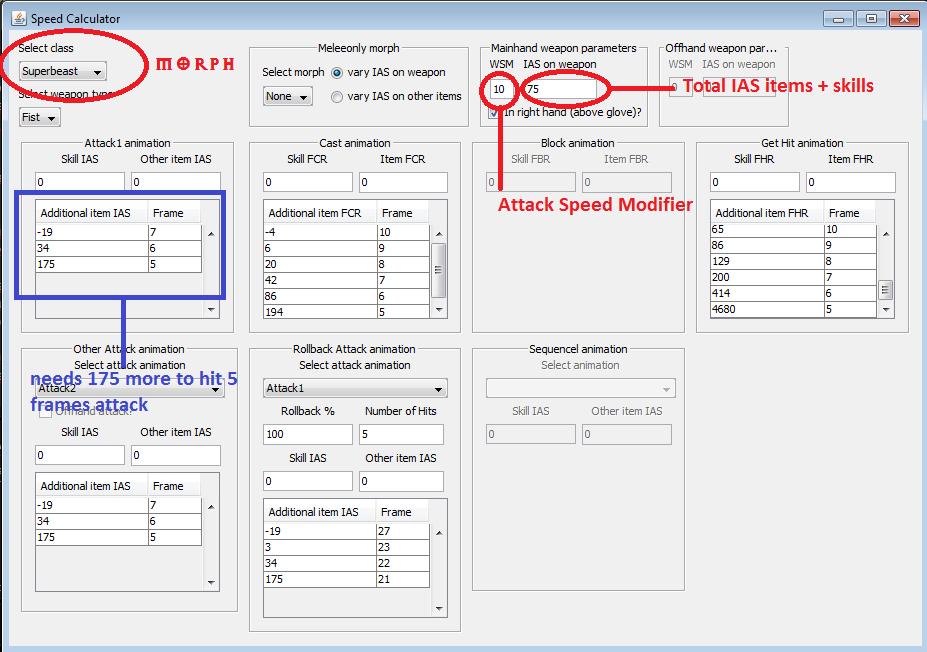 Sangreal
Paladin Shields
'Lo'
Runeword Level: 59
Level 1 Demon Blood Aura
25% Attack Speed
25% Hit Recovery
-10% Base Block Chance
+33 Defense
Lightning Resist +20%
- Aura will give you a lot of life, but the extra life gained from it won't give you more pierce. Either bug or intended behaviour.
The Ivory Tower

Pax Mystica
Staves
'Nef'
Runeword Level: 13
+1 to All Skills
+15% Bonus to Poison Skill Duration
+(2 to 5) to Blink
Elemental Resists +(11 to 15)%
(11 to 13)% Magic Find
- for blink. Often underestimated and forgotten it really does make your leveling faster and easier


The set is absolutely amazing. It only requires level 80 to wear. Try to get good rolls on +skill and fire/cold damage. Fill the sockets with Ohm's then Zod crafted jewels. Aim for +spell damage, energy factor, all attributes, vitality. I MO'ed mine with +fire spell damage and +mf. It absolutely destroys fautz and duncraig.

As I said earlier, the set should be easily available to anyone playing on the realm, and probably not all that hard to get yourself from K3K. There are only few quests in 120-130 range that will give you trouble

QUIET CRAFTS
Another option is to go with Quiet crafts. Be aware it might take well over hundred shrines spent to beat the set and even thats not guaranteed

Quiet Aerin/Heraldic Shield - This can roll really nice with +5 Paladin skills. Energy factor, spell damage, vitality and so on. Most likely the best choice if you go 1h.
Ignis Demonia


Armor: You will likely want to juggle few armour pieces as you collect more charms and your stats change.

Shield: You will likely want to juggle few shields as you collect more charms and your stats change.

Athulua's Oracle
Amulet
Athulua's Oracle
Required Level: 60
Item Level: 60
+(1 to 2) to All Skills
40% Attack Speed
(150 to 250)% Bonus to Attack Rating
Cannot Be Frozen
(15 to 20)% Chance of Uninterruptable Attack
- Good all around. Bonus AR helps with sustain while bossing.
Angel Heart

Ohm and Ral runes depending on how you feel about your life/pierce. Perfect max resistance gems for gear check ubers.
Ohm runes become more valuable as you gain charms and farm more signets (Untwinked guide is about doing ubers with 0 signets eaten though).
Zod crafted jewels beat Ral runes easily if they roll +3% fire spell damage and anything else. look for energy factor, life, vitality

Tips
► Show Spoiler
You probably will get stuck multiple times along the way. If you are dying repeatably somewhere in the 105-120 Ubers or 105-125 Rifts take a deep breath and think what kills you. Not enough max elemental resistances and low AR are the common causes. If you keep dying in one spot, try different uber. Eventually you will succeed. Remember, each charm you pick up adds to your total power and makes the next fight a little bit easier.

105 Zones - Shouldn't have any problems with these as long as you are careful. Try to make a habit of drinking a life potion every 6 seconds during dangerous fights. Special mention goes to the Isle of The Sunless sea. It's ok to farm this area for as long as it gives you exp. Mystic Orbs are quite expensive.
110 AKARAT - You can try teleporting onto him with hoplites summoned.
110 LORD ALDRIC JITAN - Try to lure just few guardsmen at any time.
115 TRAN ATHULUA - Amazons will sometimes proc broadside on death. Don't stop moving.
115 BULL PRINCE RODEO - He will try to lock you in hit recovery. Buff your FHR. This fight is quite rng so be ready to die few bullshit deaths.
115 RATHMA SQUARE - Plan a shortest route to get to the boss. Jump on him ideally with your summons up. The charm rolls up to 150% AR so you might want to kill him few times.
115 BLACK ROAD - Much easier if you stack max fire resistance and absorb.
115 LEGACY OF BLOOD - Jump on the boss with your summons up. If you die repeatedly come back here after you pick up few more charms
115 HEART OF SIN - Really good charm drops here. Stack max fire resist/abs and you're good to go.
120 JUDGEMENT DAY - It's unlikely you'll do 1 minute challenge on your first try, but don't sweat it. The regular charm has abs on it and that's what let me kill Quov Tsin then come back here later.
120 QUOV TSIN - Purely an elemental resistance gear check these days. He either obliterates you or hardly does anything with little in between.
120 EVE OF DESTRUCTION - Try to lure any adds he spawns by teleporting over the center area. Adds will follow, while Baal often gets stuck on the ledge.
120 BANISHER OF LIGHT - Obligatory 5x Zod runes in weapon for 25% slow. Once in melee range you can he often forges casting for few seconds and futility swings at you. Run small circles around him to prevent too many pounces. Patience is key here.
120 KINGDOM OF SHADOW - Keep summoning hoplites on the way, cast sacred armor before you jump on the boss. Took multiple times to finish this one.
120 TEGANZE - With max res / abs gear on you can farm this pretty comfortably. When boss turns into bat, run away as you can't hurt him in this form. I skipped farming essences for the charm.
120 THE TRIUNE - As charm does nothing without farming the zone for few hours I decided to skip it for the moment.
125 TORAJA - More annoying than hard. Keep your cool and your Edyrems up. Try not to wake up the whole place at once. Lure the boss back to the cleared area.
125 FAUZTINVILLE You can actually farm this place quite comfortably for exp, if you wish so.
125 GHOSTS OF OLD BREMMTOWN Keeps your summons and health potion buff up. Go slowly and its easy to get upgraded charm.
125 LORD OF LIES The real boss is a tiny rat scuttling on the floor. Fight might take around 10-15 minutes. Be patient and remember to repair your gear before going in.
125 VIZ-JUN Managed to die here few times before I got to pick up the charm. Definitely doable with some luck and patience. Using
Fuse

Fuse
Belts
'Mal'
Runeword Level: 49
15% Chance to cast level 14 Immolation Bomb when Struck
Adds 5-24 fire damage
0.125% to Fire Spell Damage (Based on Character Level)
+(58 to 86)% Enhanced Defense
Fire Resist +(31 to 50)%
Poison Resist +20%
Level 5 Blast Wave (20/20 Charges)
for Blast Wave charges to cast after purifying the boss would propably do the trick.
125 XAZAX - Managed to get him to 50% so far.
125 SPIRIT WORLD - Definitely not easy, but might be doable if you minmax your TU's, perf your charms and farm signets
125 ASTROGHA - As above.
125 NYMYR'S LIGHT - Didn't try it, yet.
125 YSHARI SANCTUM - maps: stage 1 https://imgur.com/iZ7pIBa stage 2 https://imgur.com/pS68AoK stage 3 https://imgur.com/eEhfQq5 stage 4 https://imgur.com/2nEuySi stage 5 https://imgur.com/Mo9QumG. the hard part is getting through the maze. boss fight is quite managable with available morph, regen and rapture


The 105-125 ubers I didn't mention above are the ones I found pretty straight forward.

bapcja wrote:Reserved. Guide is Work-in-Progress and will be updated with more endgame item setups and maybe a leveling / uber walkthrough.

good job so far . but it will need "a leveling / uber walkthrough" , else it's not more than a miniguide . you may also consider including one more skillplan for before level 90 (early game) when maxing the grim presence does not help at all and may stay as 1-pointer while maxing another skill . it may be usefull for those who start to play as unholy melee from level 1
#3
8 months

1
TheError
Rust Claw
89 | 1
100
Very nice to see another UHM guide. Let me go through a few things in the endgame item guide:

Weapon:
Wow, I need to get the
Ensi (Xis)

Ensi
Paladin Spears
'SoXis'
Runeword Level: 120
40% Chance to cast level 60 Cataclysm on Melee Attack
100% Attack Speed
+(172 to 200)% Enhanced Damage
Adds 250-375 fire damage
+3% to Poison Spell Damage
Hit Blinds Target +(2 to 3)
Cannot be Unsocketed
choice you mentioned. That one looks perfect for farming. Other than that, is the fire damage from Dux Infernum really that strong so it becomes BIS for bosses? Will try it since I have it.

Gloves:
Wouldn't a +2 pala craft with EF, spell damage, vitality be the 2nd or 3rd best choice? I realize with Radiance the Xis one is superior.

Personally I'm using a macro for the short buffs and another one with weapon swap for the long buffs, makes it more enjoyble. Else it's a bit too much skill switching imo.

Donated 25 times
so in endgame its better to go full fire dmg so as main attack blood thorns or can i also still go lemure?

Jovoman wrote:so in endgame its better to go full fire dmg so as main attack blood thorns or can i also still go lemure?

The general consensus is that blood thorns beat lemures overall. perhaps they could even match its single target damage on bigger hitbox bosses

It gives pierce, but the pierce cap is 200 afaik. And that isn't hard to get like the guide says.
#10
8 months