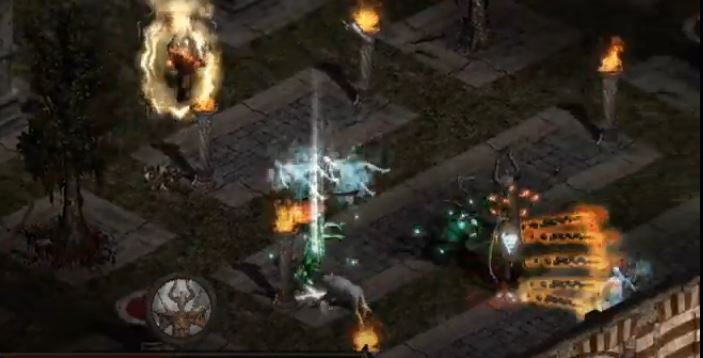 I decided to make this one, since i see a lot of people complaining about this uber, that it is ridiculously difficult, so players can see that it is a really easy fight, and beat it easily. Let's get started.


Before we even think about doing the boss fight, we need to acquire the Tome of Possession from the miniboss called Durram (or something like that).
Lucion is immune to all damage, and can be only damaged by Malic's balls. Players need to use the Mind Control spell from the tome to make Lucion hostile to Malic, so Malic can hurt Lucion.

Big Balls In YO Face: Malic spams this ability. When hit, it inflitcs the player with a burn that quickly drains HP. The burn effect can not kill players. The balls also do a minor amount of physical damage to kill any player thats already at 1 health from the burn effect. This also means that these are blockable.
GTFO: Malic will occasionally casts this spell. When used, it teleports players, and Lucion randomly around, while also spawning a few bats, and doing some minor damage with each tick. The bats have no abilities, they just melee players. The damage tick from this spell can and will kill players that are at 1 hp.

Big Bad Curse: Curses the player, which drains hp over time, and slows the player. The damage from this is also not lethal. Players will pretty much never see this ability, once Lucion engages Malic.
Gotta go fast!: At 60% hp, Lucion gains a big movement speed boost.


-Holding the Tome of Possession emits an aura, that reduces avoid by 100%, to allow Lucion to take damage. This means that players should remove the tome from their inventory once the fight is complete.
-Fire shrine makes the player immune to the burn effect of Malic's balls. Keep in mind, that this damage is not fire type, so it can not be reduced by fire damage.
-There is a purple skull icon at debuffs, which indiciates that this aura is working. Weapon swapping can break the aura. If it happens, pick the tome up in the inventory, and out it back down, it should make the aura appear again.
-There are also a few items and effects that can break the aura, like
Idol of Fortune

Set Bonus with 3 or more set items:
+2 to Amazon Skill Levels
+9 to Tremor


. If picking and putting the tome back down doesnt fix the aura, remove your item(s), starting with breaking sets.
-Lucion has a very stupid AI, and will try to complete its current action once charmed. This means that if Lucion is trying to attack you, and you charm, Lucion will still follow you and try to bitchslap you. Run into melee range of Lucion to beat some sense to the boss' ai, so it can aggro on Malic.
-The same stupid AI also helps the player. The Mind Control spell has a random duration, and it can not be refreshed on Lucion. This means that the player must be quick recharming Lucion, as the Mind Control fades. Lucion will always try to finish its currect action, which is to melee slap Malic, which gives time to the player before Lucion aggroes on you.
-The boss has a white swirly thingy over its model while charmed, react quickly when it goes away.
-The GTFO spell is not a big deal, just deal with the bats, and find Lucion to recharm.
-Cycle stats can be found HERE


Video about the kill

As it can be seen, i am not too good at this fight, i missed a couple of charms but it is not that bad. Hope you can gather the strength to give this a try once again, now with the knowledge in your hands. Happy cycle farming!

Donated 25 times
Really appreciate your effort in putting all that together, BUT, this fight still needs to be rebalanced since it is extremely clunky.
#2
11 months

Created a complete character guide
As you can see, the video is only 4:34 long, which includes 1 minute of kiting Lucion to Malic, and then 30 seconds at the end to pick the wormhole up, so the actual fight took 3 mins. I think anyone can bear it for that long.

Good old times, when this fight took 30 mins back in the days...

Keter
Thunder Beetle
59 | 0
935
Last season i tryed kill Lucion, but it regeneration without my help. Why Lucion in your video dnt regen?
#4
11 months

Created a complete character guide
That regeneration happened if the boss did not take damage for some time. It was removed. But if you didnt leave the boss uncharmed for a longer period of time, it didnt trigger, so if you executed the fight properly, the healing didnt happen.
#5
11 months

-The same stupid AI also helps the player. The Mind Control spell has a random duration, and it can not be refreshed on Lucion.

SinClaire
Sasquatch
68 | 0
0
No mention of Dominate? Does it not work anymore? (Or no longer an available affix?)
#8
11 months

Donated 1 time
why the fxk my malic cant deal the dmg on lucion? are they some kind of gay? or is there any kind of miss for spell on him? crazy balance shit
#9
11 months

SinClaire wrote:No mention of Dominate? Does it not work anymore? (Or no longer an available affix?)

I don't really understand this question.

bibel89 wrote:why the fxk my malic cant deal the dmg on lucion? are they some kind of gay? or is there any kind of miss for spell on him? crazy balance shit

Did you even bother reading the guide?