A Median XL guru... a true book of knowledge
Nerfs are coming boys

Won 50 auctions
Nerf nerf nerf why nerf so much

A Median XL guru... a true book of knowledge
They hate fun.
No but its still viable.

I'd change skill tree now, try to use that juicy wolf stance buff.
Bear version can still work but with all those nerfs, visegrip nerf, our damage will drop pretty hard, to the point its gonna be annoying to kill lategame bosses. 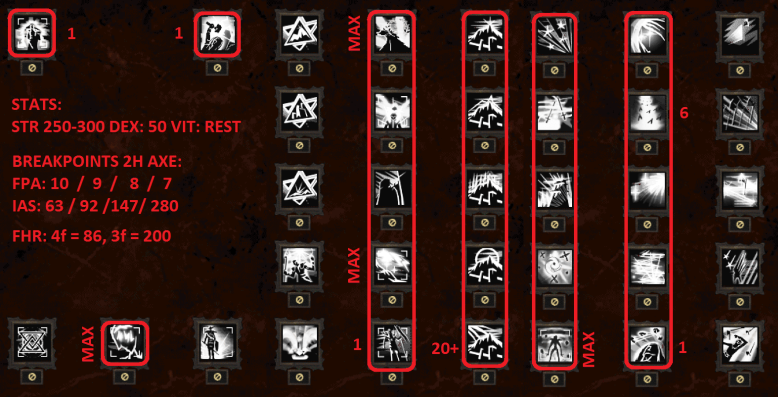 Few points about this tree:
- go around anc blood nerf by getting not-nerfed daedalus, and some AR (much needed after visegrip nerf)
- get buffed wolf stance, increase trash kill speed with free cb and pretty decent ewd
- defense comes from spirit guide (defense part isnt nerfed, 15tcd per base level)
- don't go all in on wolves max level (no ancient blood) because there is not enough points and their damage bonus is less important with wolf stance ewd
- skip fortress = not enough points, respec if you can't kill kabraxis as melee
- gain windform to travel through stuff, makes bunch of ubers way easier
- get %physical resistance from gear, won't be 50% but we can hit about 35. In many instances we can still use 1pt bear for 50%.
- not skip Shower of Rocks, good in dense places, tagging bosses to reduce their speed/hit chance, underrated skill.
- still use thunderslam, just every 15s not 4s.. now you can truly see how goot it was
- we still go 2h axe, even with proc nerfed, average damage is still so good compared to swords, wouldn't give it up
- deathgaze is nerfed to 55%, almost the same, still miles better than iron spiral in early-mid game
- healer specs work the same but will be worse, so stuff you used them for will be bit harder
- wolf stance speed is best utilized with 2h axe, because that 280 ias requirement, so we can get full value from it, unlike if we go thrower or dual wielder which requires very little ias to cap speed, thus making that part of wolf stance going to waste
- we get more lah runes in gear as we don't need ias/fhr with wolf stance, we get total char def upgrade on armor to boost defense even furher

Normally candlewake was BIS, might no longer be the case. SBS? Marchosias chest?
Visegrips ==> ??? for endgame

Im considering honorifics with abandon blessing for BIS gear on gloves. Not sure about boots and belt (akarats and marchosias a.t.m.).

A Median XL guru... a true book of knowledge
I don't think you wanna go honorific over craft, you miss out on AR crafted roll and juicy all stats/life from craft, it isn't worth double mo, unless you go some specifc umo project.
AR needs to be on more items, for example 4x EARTH runeword boots looks pretty good.

Endgame is bit different because you might just straight up outstat everything that you can get away with very little physical resistance, then you go full dps armors. Otherwise you must get pieces with high %physical res, which is 16% from erawan. Khazra plate seems to be there, hard to beat this chest, even with demon blood aura affecting only owner not his minions/party.
#786
1 year

A Median XL guru... a true book of knowledge
For endgame ubers depends on which one, i'd say around 30-40k, for bosses more, for boss like samael much more, which is big damage nerf to that specific spec. But if you get bunch of +all stat items, AR rolls here and there, most charms, you should get there.
Just we need to count that this build will deal certain % less damage to bosses than dexterity wdm build that runs over 100k ar without any effort.
#788
1 year

Donated 1 time
Love this guide, great job! Sorry to ask but, what is the difference between crafted weps, shrine weps, and TU's? I'm just iffy on the crafted weapon part.
#789
1 year

A Median XL guru... a true book of knowledge
Craft gets way more damage, you can roll up to +375 maximum. Compare that to TU labrys.
Shrine you use doesn't matter in getting that mod, it gives other bonus stats.
#790
1 year